The Hyundai i30 was Australia’s best selling car in September 2015, by a large margin. With sharp pricing attracting a range of buyers, Hyundai shifted 4,490 i30s last month—nearly 2,000 more per month than this time last year.

Small cars and SUVs led a resurgent new car market. Year-to-date, new car sales are up 3.6% on where they were in 2014. Tony Weber heads the Federal Chamber of Automotive Industries, and chalks to successful year up to ‘affordability [being] at an all-time high’.

The i30 significantly outperformed the second-placed Mazda 3, of which 3,588 were sold last month. However, it was the Mazda that managed to edge out the Toyota Corolla, which delivered 58 fewer sales, scoring 3,530 in total.

The Corolla made the podium, but a third-place finish isn’t likely to please Toyota. The better news for the brand was their overall leadership of the new car market, but a margin of more than five thousand units.

This month’s top-ten best sellers list reveals how popular the trio of i30, 3 and Corolla are, relative to all other passenger cars.

After Corolla, sales to the next-best seller fall by a thousand units. Fourth-place honours fell to the recently refreshed Toyota Camry midsize.

Other highlight results from September included the incoming Ford Ranger Mark II, whose 2,471 sales show the effect of supply constraints biting. The Holden Commodore continues its impressive run, with 2,348 sales resulting from attractive discounting of the outgoing VF Series I.

The Volkswagen Golf returned 2,085 sales and a top-ten finish. September will be the final month representing a period before the buying public were made aware of the diesel emissions scandal that has cast a cloud over the German manufacturer.

Overall, passenger car sales—everything bar SUVs and commercial vehicles—have returned to modest growth of 2%. However, it’s what Weber calls the ‘phenomenal’ growth of the SUV market that is carrying the new car market as a whole. SUV sales were up 23.1% over last year’s September result.

Most popular micro cars in September 2015

The three-cylinder Mirage and Celerio remain a pair of Australia’s cheapest cars and it’s no surprise they keep shifting in bulk numbers. And despite heading north in price, the Fiat 500 remains a consistently popular option.

Most popular light cars under $25k in September 2015

The Honda Jazz and Volkswagen Polo both made up more than 10% of the light car class each this month, just missing a podium finish. The Mazda 2 is easily the best car in this segment and deserves its strong lead. The Ford Fiesta is another gem of the class, though it’s older—a consistent seller if nothing else, though. In September last year, they moved 311—fast forward 12 months and they sold 312.

Most popular light cars over $25k in September 2015

Only six models compete in this segment, and it’s really all about the Mini and the Audi. The Citroen DS3—a good but quirky three-door—only found two new homes. Not a deserved result.

Most popular small cars under $40k in September 2015 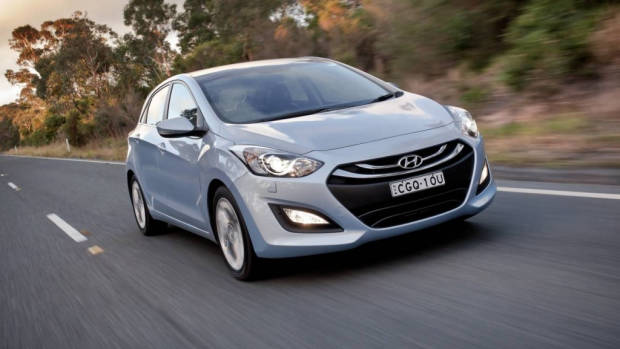 Hyundai are finally seeing the really big dividends of their local i30 development program. It’s among the most desirable models in the segment for a range of buyers. Fleets can choose bargain petrols or the (excellent) diesel, while private shoppers find the recent update quite appealing. This class is super-segmented with lots of models hovering around the 2-3% share of the market. Ford felt the bite of Focus supply constraints as their monthly share fell to 1.6%, half their yearly average.

Most popular small cars over $40k in September 2015

The tight contest continues in the competitive luxury small car class. The Audi and Mercedes have been dominant this year, but the BMW 1 Series held their numbers back this month thanks to a much-needed facelift.

Most popular medium cars under $60k in September 2015

The new-look Camry is now nicely entrenched in the medium segment. Private fleet and taxi sales continue to buoy the Toyota along—it truly kills everything else in the class. We’re cheering that thirteen people bought Holden Insignia VXR sedans—nice. An offbeat choice, the Skoda Octavia, is doing better and better, up 50% on last year with 221 sales.

Most popular medium cars over $60k in September 2015

The C-Class continues to lead the premium medium segment, far more than doubling the 3 Series’s success. The BMW should buck up from the Life Cycle Impulse 2016 update that arrives soon. Two big threats to the Mercedes are inbound and will dent its market share—the Jaguar XE and the all-new Audi A4.

Most popular large cars under $70k in September 2015

Interestingly, this category also captures the Hyundai Genesis, of which 39 were sold last month (1.2% market share). That’s up to 392 for the year for Hyundai—not bad when you consider it against a rival like the Lexus GS, which has been super-slow, racking up just 104 sales this year.

Most popular large cars over $70k in September 2015

Into the slower-paced luxury class we head. The E-Class’s curvaceous sibling, the CLS-Class, had a good month with 46 finding owners. Meanwhile, the Maserati Ghibli is a major success for the Italians: 38 more sales adds to a running total of 272 in 2015. Plus, someone bought a Volvo S80. Dare to be different.

Most popular upper large cars under $100k in September 2015

It’s a group of two, so everybody’s a winner! It’s the last full month for the Caprice on these charts before it goes all-LS3 V8.

Most popular upper large cars over $100k in September 2015

Everything but the S-Class in this category sells in single digits. Sure, there are a few hire car sales in the mix. More than that, the result speaks volumes of what discerning buyers are thinking of the large luxury segment right now: renewal is needed. BMW are hoping that takes the form of their new 7 Series, arriving soon.

Most popular people movers under $60k in September 2015

It’s sad that one of the best cars in the class, the Citroen C4 Grand Picasso, goes largely unnoticed—18 sales this month is actually the model’s 2015 average. The new Carnival is cleaning up—it’s a huge improvement on the old car.

Most popular people movers over $60k in September 2015

Hire car fleet managers continue to throw a bit of love towards the Mercedes van range. The V-Class is new and definitely better than the Vito-based stuff and will make better hire-car vans. Interestingly, the high-end UberBLACK service in the major cities has an impact here. Hire car firms are increasingly replacing their vans with proper SUVs like the Audi Q7 or Mercedes-Benz GL-Class. The reason? The SUV-based seven-seaters can be driven on both UberBLACK and the slightly-more-expensive UberSUV product. Van-based options like the V-Class can only be used for UberSUV, not BLACK, meaning they go underutilised on the popular Uber platform.

Most popular sports cars under $80k in September 2015

Euro imports are back at Holden. It was the first month on the charts for the Astra three-doors and the Cascada convertible—they’re doing well right off the bat. Together, they’re sharing 13.6% of the market! It was also a mega 2 Series month, kicking up from a 2015 average of about 14% to nearly 21%. It was an odd month for the Hyundai Veloster, with just 42 leaving showrooms.

Most popular sports cars over $80k in September 2015

The class standout this month was really the great Porsche Cayman, which jumped up 40%. The C-Class coupe runout has sustained good numbers for Mercedes in this segment—surely the 100+ units sold has nearly dried up supply of the superseded model, though the new shape isn’t inbound for a number of months.

Porsche keeps running away in this segment, though September was a real bumper month thanks to some modest specials on the final 991.1 builds. The 991.2 mid-cycle refresh arrives imminently, and sees the Carrera go all-turbocharged, shock horror. You can still snap up aspirated flat-sixes at local dealers, though.

Most popular small SUVs under $40k in September 2015

Hyundai had ix35s walking out the door in September. Runout deals have been attractive as the Tucson has now hit showrooms, so the brand is keen to clear out the old to make way for the new. Twenty enlightened people bought a Peugeot 2008 while the Honda HR-V continues to troop along for the Japanese, racking up a decent 10% share of the market bringing the year’s total to more than 8,000.

Most popular small SUVs over $40k in September 2015

The Audi just keeps chugging at the top of the class here, with a month that outperformed the model’s 2015 average. A Monsoon Grey Q3 was actually delivered to my friend Hannah and forms part of the total. Her first impressions? They seem positive.

Most popular medium SUVs under $60k in September 2015

Mitsubishi’s facelifted Outlander had another decent month in this rather segmented class—sixteen models got runs on the board last month. Critics do write off the Toyota RAV4 most of the time, but truth be told it’s solid—and it’s the only thing that comes close to touching Mazda’s dominance.

Most popular medium SUVs over $60k in September 2015

Buyers don’t seem to care about the Q5 being among the oldest in its segment—they still can’t get enough of them in. Audi’s been quietly offering some sweet deals on it lately and we suspect that’s had something to do with it. A relatively close fourth is the popular Porsche Macan, whose 222 sales were bang on average for the model this year.

Most popular large SUVs under $70k in September 2015

Discounts on the Prado—the last of the three-litre diesel—meant it was a bumper month for it in September. Toyota will be hoping the new 2.8-litre brings numbers in for the rest of the year. An honourable mention goes to the Holden Captiva 7, which found more than a thousand new owners.

Most popular large SUVs over $70k in September 2015

Isn’t it called the GLE yet? Apparently not—the VFACTS report has separate entries for the three Mercs currently present in this category. The last of the old MLs did well enough to make second place, while the GLE (99 sales) and GLE Coupe (81 sales) broke through despite little recognition in the market of the new names.

Most popular upper-large SUVs under $100k in September 2015

The ultimate two-horse race and Toyota continues to lap up the sales thanks to the lack of a diesel new-shape Patrol.

Most popular upper-large SUVs over $100k in September 2015