Think of a Toyota Camry and there’s a good chance that one of a few words comes to mind. Average. Boring. Reliable. And omnipresent: look in any direction in an Australian city and chances are that you’ll spot Toyota’s mid-sizer. Not that any of these attributes are negatives—you’d forgive Toyota for being entirely comfortable with the uber-popular Camry’s dreary but dependable reputation. But they’re not. We’ve written at length about Toyota’s goal to inject a bit of soul into how their cars drive. At this juncture for Camry – the launch of the eighth-generation version, the first imported Camry in thirty years – that attention has been given to making the Camry more fun to drive and better to look at. And you know what? Toyota have succeeded. The 2018 Toyota Camry is a genuinely interesting car. Who saw that coming?

How’s that possible? Mostly because the eighth Camry is an all-new car from the ground up, engineered from the start to include some of the new brand values we saw first in the rear-drive 86 sports car, and more recently in Toyota’s funky small SUV, the new C-HR. In fact, the similarities to the C-HR run more than skin deep: the two both sit on Toyota’s new modular platform, called TNGA. Like Volkswagen’s MQB platform, it’s now clear that Toyotas based on TNGA have a similar feel: the C-HR’s supple, almost serene ride quality can be felt distinctly in this new Camry. On the road, the Camry’s chassis feels quite sophisticated, with a sense of true cohesiveness flowing through to the driver. Rigidity is said to be up 30%, though that feels like an understatement; unlike the last model, there’s effectively nil flex here. Even the steering has been given adequate weighting, at last, even if communication from the front wheels remains scarce.

The sole element of the old Camry that carries over to the new car is the entry-level 2.5-litre petrol engine. On the new model’s launch this week on the north coast of NSW, Toyota were keen to gloss over this factor in order to concentrate on the two more impressive powerplants. There’s a 160kW hybrid, combining a different (and brand-new) 2.5-litre petrol with a beefier electric motor – the Camry Hybrid is claimed to achieve a seriously frugal 4.2L/100km. On the other end of the scale, V6 power now returns to Camry. The end of local manufacturing spelt the end of the Aurion, a car which stole the role of six-cylinder sedan from Camry about a decade ago. Now, the Camry is available with a subtly revised version of Toyota’s 3.5-litre direct injected V6, providing the range with healthy outputs of 224kW/362Nm. 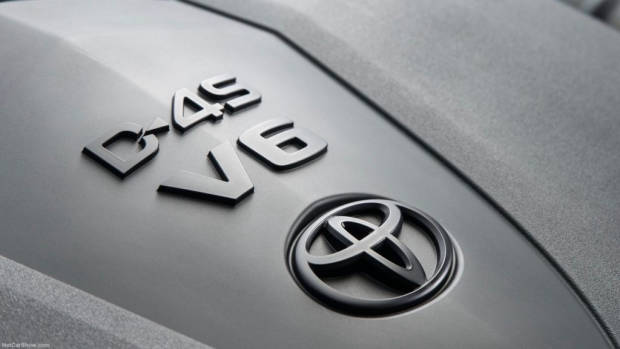 The looks are substantially improved, in our eyes. The previous generation started life with a decent squared-off design and ended with a somewhat ungainly facelift. The new car – while still being essentially American in style – is aesthetically adventurous, with a much lower, squatter profile. The drama is upped everywhere; the front end is more memorable and is reminiscent of that on the C-HR, while the rear end incorporates aggressive strikes. There are quad tailpipes on most petrol Camrys; fair enough on the V6, though you have to question the relevance of quads for the very modest 131kW 2.5-litre. However, we strongly praise the decision to limit the ‘conservative’ design package to the base model – now called the Ascent – while each of the other grades features a tasteful, sporty look outside that is far more suited to the Camry’s sexier new visage.

Great leaps have been made inside. The base car waves goodbye to its humble roots and humbler plastics, swapping in a plethora of soft-touch materials on the dash and doors, along with a crisp touchscreen with new, grown-up graphics and more comfortable seats. Only Toyota’s insistence of retaining a nasty plastic steering wheel and gear lever let the side down. Thankfully, every grade above the Ascent replaces these with leather-like surfacing. The seats remain comfortable through the range, though the choice to not provide seat heating at all is bizarre, given the cold winters in Toyota Australia’s home state of Victoria – the top-of-the-range SL has only three-stage cooling for both front seats. 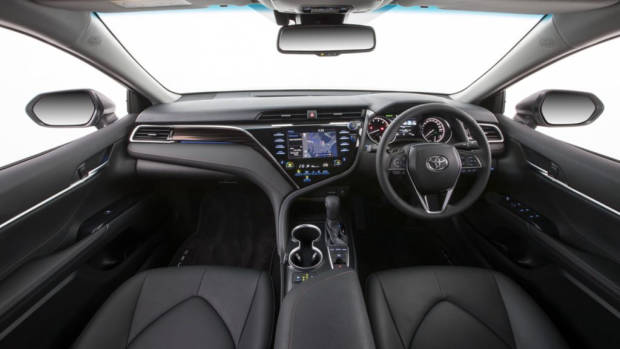 Let’s face it: the crazily-low driveaway prices of the outgoing Camry, which reached as low as $26,990, were not going to be repeated on the new, imported car. These figures were artificial, propped up by the Australian-made nature of the car and Toyota’s increasingly frenetic desire to clear the decks for the incoming shape. The new car is impressively sourced from Japan – Toyota Australia decided not to cheap-out and pick up a Thai-built alternative. With that in mind, the new list prices, which commence at $27,690 and head through four grades to a top-end cost of $43,990, are actually highly competitive with the rest of the segment.

For some years now, the easiest Camry to recommend has been the hybrid: family-size cars haven’t come much more frugal than this part-electric Toyota, which has also afforded a way to access most of the Prius’s fuel-saving technology without that car’s ‘mixed’ image. By contrast, the conventional 2.5-litre petrol is essentially a fleet car engine, and given the still-attractive price of the entry-level Ascent ($27,690), it will remain so. However, the relatively limited step up to the Ascent hybrid ($29,990, down $500 on the previous shape), which is better to drive and more environmentally-friendly, will be in contention for fleet buyers as well. By contrast, Toyota expects the V6 model to direct more interest from private buyers back towards the Camry badge. After sampling each drivetrain, that feels like an appropriate aspiration. 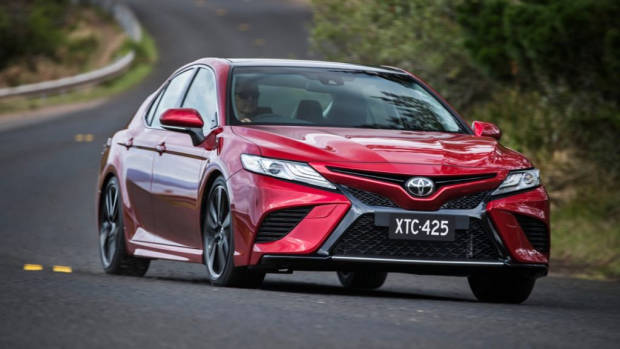 It’s unfortunate that Australia does not receive the new standalone 2.5-litre petrol found in some overseas markets, but the carryover non-hybrid four-cylinder (131kW/231Nm) is an engine that simply does the job. On launch, which covered a curvy route that ascended and descended many hills, there was no hiding the shortage of torque and the six-speed automatic’s need to remain in lower gears, but around town most will find few problems. The problem is that the hybrid, which commands about a $2,500 premium, simply does that sort of work better – at low speeds, it will run about in electric power for short distances, and the instant 202Nm electric torque boost – supplementing the petrol’s own 221Nm – means it’s a much more nimble partner for slotting into gaps in traffic.

As it is in other Toyota and Lexus products, the 3.5-litre V6 is the gem of the trio. There’s little need for turbocharging here as the 224kW of power and 362Nm of torque are sufficient to motivate the Camry to sprint off the line or execute a rapid overtaking manoeuvre. The noise isn’t the sweetest, nor is the V6 as isolated and silky as it is in the Lexus IS350, but it’s easily the driver’s pick of the new Camry’s engines and so-equipped, the Camry feels like a lot of car given the V6 is available for under $40,000. 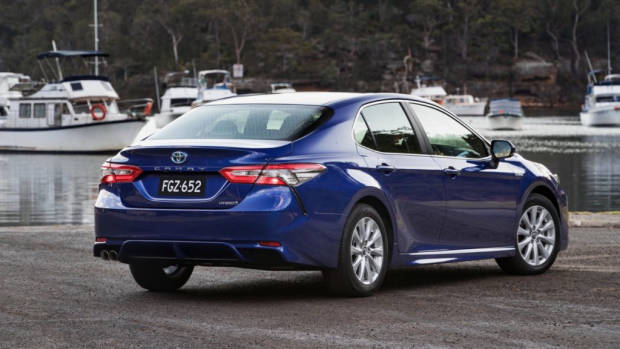 That said, the V6 entry point, in the stiffly-sprung, ‘sporty’ SX model, is not the pick of the range. The SX’s unique suspension tune and large 19-inch wheels discards the terrific suppleness of each of the other models in the range; while the SX’s exterior design looks the business – and lairy red leather is available if you like that sort of thing – the sporty Camry is not a great Camry; the Mazda 6 does this act better.

But there are some really good picks to be found within the range. One is the Ascent Sport hybrid ($31,990), which will tick boxes for many different kinds of buyer. It’d make an ideal car for somebody who drives on UberX, while being equally suited to serving as a good-value family car, helpfully undercutting the Mazda 6 Sport on price (by $500) while packing in equipment like active cruise control, LED headlights, and automatic high beam. At the other end of the range, the SL V6 ($43,990) is a surprisingly compelling proposition. The V6, when coupled to the Camry’s impressive regular suspension tune, makes a very relaxing cruiser. Maybe it’s time to put a hat on the parcel shelf, but to our eyes the SL’s multispoke alloys look handsome, though you’ll want to avoid the shade of gold on the colour palette. 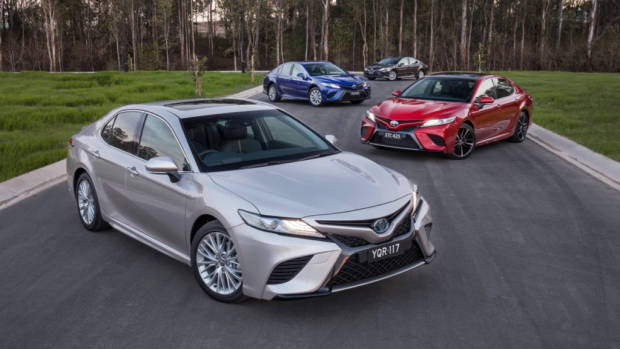 We’re keen to evaluate the hybrid’s economy in more depth in town, as opposed to the rural route of the Camry’s launch drive, and that will occur in due course – as will a test of a number of other variants from the range. However, our first experience of a few hundred kilometres behind the wheel suggests that Toyota really have pulled off a mean feat here, placing the Camry firmly in contention among mid-sizers. Sure, the cost of the car is effectively up several thousand, but the Camry is so far improved that these new prices still feel like a sharp deal.

And yes, the Camry is no longer an Australian car – but we’re glad. Released from the bonds and costs of building cars in a small and inefficient market, Toyota have that much more to invest in engineering prowess, and that shows. In every way, Japan’s Camry is a better car and one we’re quite happy to recommend. 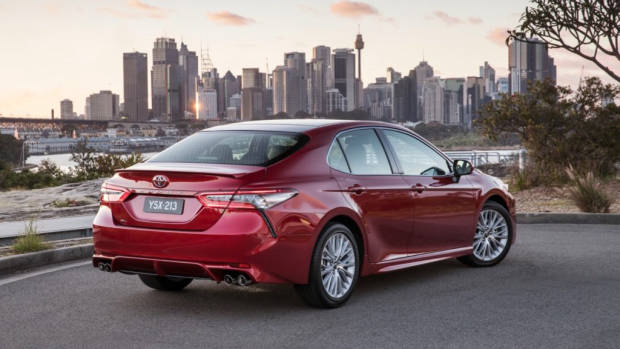