Even in the middle of its lifecycle, the Hyundai Tucson has remained one of the easiest midsize SUVs to recommend due to its blend of value for money, decent driving dynamics, inexpensive servicing, a long warranty, and attractive styling. Well, after three years of service, the third-generation ‘TL’ Tucson has come in for a facelift and some subtle mechanical changes. The three engines are unchanged – among them, a satisfying diesel and a punchy turbo petrol – but the ride quality has been softened off a touch, the safety offering has been improved and the cabin has gained more premium materials. Prices are up, though – so does the 2019 Hyundai Tucson still deserve our recommendation?

Two days spent in country Victoria driving the revised Tucson suggests that this SUV continues to impress, even factoring in moderate price increases, which are lowest at the ActiveX level, but highest in the third-tier Elite, the level at which the Tucson includes a suite of adaptive safety technology as standard – but more on that later. The Tucson is a little better to drive, a little better looking, and a little more comfortable – and overall, you don’t feel short-changed having to generally pay a little more than previously. 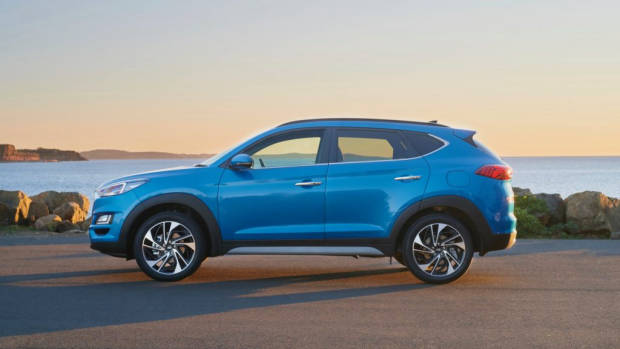 The alterations to the Tucson are mostly skin-deep, but there are one or two engineering changes to touch on. Most obvious to the casual onlooker is the more masculine, upright front and and simplified rear end – a few small changes work to positive effect in our eyes. It’s a pity, though, that only the top-shelf Highlander receives the attractive (and powerful) LED headlights that really complete the look. Inside, all grades see improvements in material quality, led by a wrapped and stitched panel running the breadth of the new-look dash. Other plastics are generally soft and grades with leather seats feel quite special. The old integrated touchscreen is gone; it’s now a tablet-style unit measuring eight inches in most grades.

Under the bonnet, an extra kilowatt and 2Nm are extracted from the basic 2.0-litre ‘GDi’ naturally-aspirated petrol four-cylinder, but otherwise there are no changes to the two standout engines – a 130kW/265Nm 1.6-litre turbo petrol, and a 136kW/400Nm 2.0-litre turbo diesel. The mechanical improvements are found in two areas – steering and suspension. The steering ratio falls by 7% to 2.51 – and the Tucson turns in more quickly as a result – while revised strut tops and bushes, and retuned, softer damping, means the Tucson feels a couple of degrees plusher and more comfortable, and less overtly sporty. 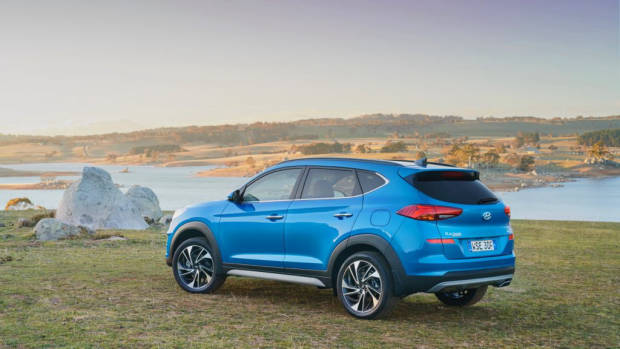 That’s no bad thing: the Tucson is an accomplished cruiser, and the slight softening of the suspension helps this car in a number of ways. It makes it a more relaxing vehicle to drive over distances – but with the caveat that the suspension never totally settles on urban and highway surfaces, always feeling just a little busy. On the flip side, the Tucson dispatches rough roads with utter ease. This is likely the best-riding medium SUV on sale, all things considered. Big hits, potholes and huge ruts are barely felt in the cabin, with superb damping isolating occupants from the kind of bad roads found in rural Australia.

The slightly more plush suspension also makes the Tucson a more entertaining handler. A touch more body motion and lean means you can attack corners with aggression in the Hyundai, relying less on the Kumho tyres and more on allowing this SUV’s body to gently roll and pivot around behind a reasonably enthusiastic front-end. This thing isn’t as sharp as a Volkswagen Tiguan on a backroad, but it’s getting there. I genuinely had fun driving the Tucson towards its limits – a rare feeling in a family SUV. The Tucson has a sophisticated chassis that feels secure all the time, and the unique Australian stability control tune gives the playful driver a little slip before hauling you into line. All-wheel-drive grades feature Hyundai’s new HTRAC system which can be felt shunting power to the back wheels quite early. 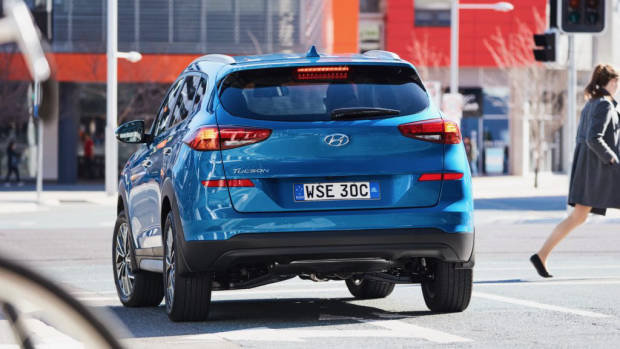 Engine-wise, the basic 2.0-litre ‘GDi’ petrol (122kW/205Nm) gets the job done but it needs a good rev, and as such, the cheapest Tucson motor gets thrashy and thirsty fairly quickly. The two turbocharged alternatives – the 130kW petrol and 136kW diesel – are notably superior, especially the diesel. The oil-burner delivers good fuel economy – about 20% better than the petrols – while feeling muscular and effortless throughout the rev range. It is hard to swallow the $5,300 upgrade to diesel on the Go or ActiveX – but the $2,300 jump on the Elite and Highlander from the turbo petrol to the turbo diesel is worth your money.

On our very spirited driving loops, the three engines were closely spread on fuel economy. The diesel recorded 9L/100km; the turbo petrol 10L/100km; and the basic petrol 11L/100km. In town, though, the 2.0 GDi will have a proportionally heavier thirst given the problems in moving an SUV off the line with relatively low torque. 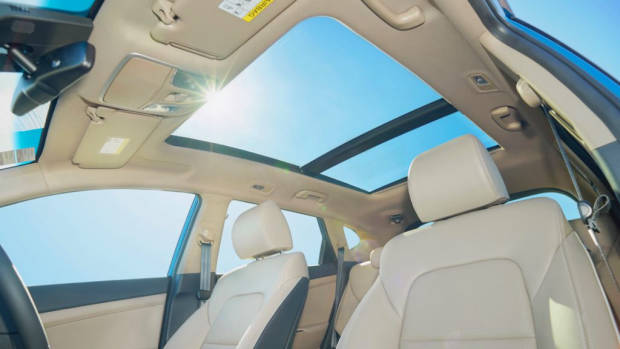 We spent our first day driving possibly the easiest Tucson variant to recommend – the Elite 2.0-litre petrol ($37,850). This is the variant that introduces a full suite of safety tech – AEB, adaptive cruise control, lane keep assist, blind spot monitoring – a $2,200 upgrade on Go and ActiveX. The Elite is a $4,000 jump from ActiveX, but the additional $1,800 pays for itself in the Elite’s hotter 18-inch wheels and chrome garnishing, plus its keyless entry and start, 10-way power driver’s seat, automatic wipers, and tinted rear privacy glass.

Though the 2.0-litre petrol is merely acceptable, it will be enough for most people and the Elite is good buying at under $38,000. That said, if you like driving and want a stronger engine, the Elite turbo petrol ($40,850) or turbo diesel ($43,150) are also worth close consideration. 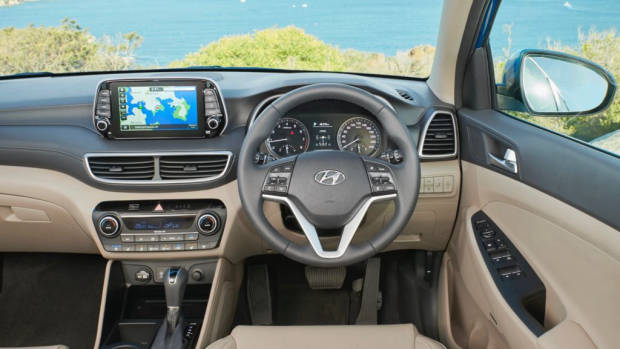 We aren’t pleased that AEB is not standard across the Tucson lineup – it was explained that auto emergency braking cannot be separated from the other, ‘premium’, safety features in Hyundai’s suite. That’s a shame, because the expensively optional nature of that suite is the only thing that blights the otherwise superb-value ActiveX.

The $31,350 ActiveX 2.0-litre manual is tremendously well-equipped at this level, with an 8-inch touchscreen with navigation and digital radio, an Infinity premium stereo, leather trim, a rear USB port, 17-inch alloy wheels, tyre pressure monitoring, and rear parking sensors. An auto is $2,500 more. 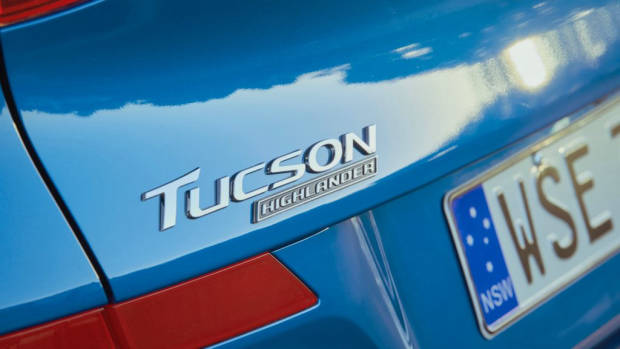 At the other end of the lineup, the blinged-out Highlander ($46,500 turbo petrol, $48,800 turbo diesel) is only a bit more expensive than before, though it does gain a heated steering wheel. The Highlander exclusively picks up niceties like wireless phone charging, a panoramic sunroof, heated and ventilated seats and a power passenger seat, a power tailgate, LED headlights, front parking sensors, 19-inch alloys, and additional visual highlights like trapezoidal exhaust outlets. The Highlander is a pretty complete family ride at sub-fifty grand.

Where the Tucson also stands apart from many of its rivals is in the ongoing costs department, where Hyundais tend to pull ahead thanks to generous warranty arrangements and a lifetime capped price servicing programme. The Tucson’s five year warranty with unlimited kilometres is quickly becoming an industry standard, though it is only beaten in this class by the Kia Sportage, a vehicle that shares the Tucson’s underpinnings but offers seven years of coverage. 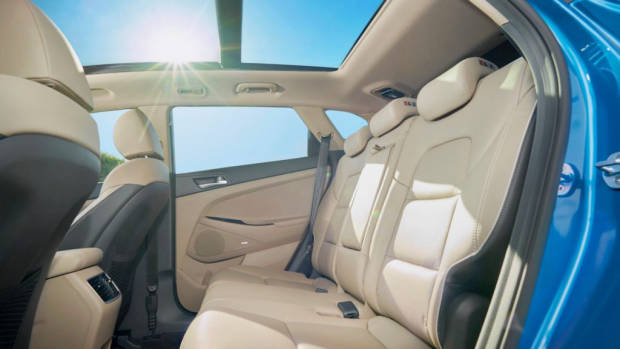 Servicing is impressively affordable, however. The basic 2.0-litre petrol is the cheapest to maintain, unsurprisingly, costing $825 over three years or 45,000 kilometres. The diesel shares the GDi petrol’s annual or 15,000 kilometre service intervals, but the oil-burner costs $1,155 over the same three year period. Meanwhile, the turbo petrol requires servicing every 10,000 kilometres, and costs $1,290 over a slightly inferior 40,000 kilometres. By contrast, a mid-specification Volkswagen Tiguan costs over $1,700 to service over three years.

While the revised Tucson isn’t perfect – we’re disappointed that AEB remains off the standard kit list on lower-end models – Hyundai’s five-seater SUV comes pretty close. Affordable, stylish, comfortable and dynamically capable, this is a well-rounded SUV that is easy to recommend. In Elite or Highlander form with either the turbo petrol or turbo diesel engines, the 2019 Hyundai Tucson makes for happy, refined family motoring without the upfront or ongoing costs of many rivals – and it doesn’t get much better than that.