If you're the kind of person that doesn't need to run with the pack to feel secure – and you're also after a lusty, perfectly-proportioned grand tourer – the Lexus LC 500 Inspiration Series is more than likely the car for you.

A green-over-tan tour de force, the Inspiration Series commemorates thirty years since Lexus splashed onto the luxury car scene. This rather sensual special edition of the two-door LC is joined in Australia by a similar limited run of the LS 500 sedan, reviewed by us here.

Under the skin, the LC and LS share many chassis components, but if you're going to be driving the car yourself, this passionately styled LC coupe is the way to go. The design dates to a 2012 concept but still resembles a concept car the world hasn't yet seen – and the turning heads this Lexus receives while gliding down suburban roads confirms its status as something truly special. A striking convertible version of the LC arrives later this year. While the LC 500 Inspiration Series shares virtues like serene comfort and refinement with its more conservative four-door sibling, the LS, it goes it alone in offering buyers a V8 powertrain. The five-litre naturally aspirated unit is one of an extremely rare breed of non-turbo-fed eight-cylinder engines and it sounds incredible: mechanical, silky smooth and free-revving.

As with the 'regular' LC 500, which continues to be offered, buyers can also order a 3.5-litre V6 teamed with small battery and electric motor. However, there is a distinct feeling that the 351kW/540Nm V8 won't last forever, and we would be signing ourselves up for the eight while we can. Both cost about $215,000 on-road.

Perhaps the LC's best feature is that it isn't a Japanese translation of a Mercedes-Benz S-Class coupe, or a BMW 8 Series. Instead, the origamiesque lines are truly unique – as is the opulent but reasonably minimal interior – and the character of the car is so different to the Teutonic offerings. In this class, sameness counts for little and it's all about standing out, which is a certainty in the Lexus. But it isn't shouty. 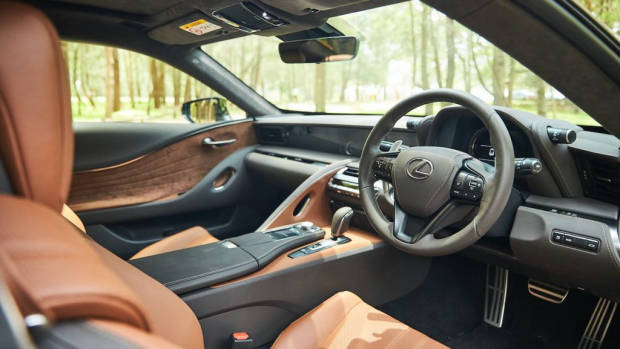 The dark green hue – named Khaki Metal – of the Inspiration Series evokes the spirit of grand tourers of days gone by, while the contrasting tan and ochre colours inside invite you into soft, plush surrounds. The L-Aniline leather seats do not offer the near-neurotic levels of adjustment that the Germans do, but they're exceedingly comfortable. Memory, heating, and cooling are all standard, though the latter two functions are controlled through a finicky technology interface.

Lexus sensibly relegates the cabin tech to a relatively small ten-inch widescreen on the dash that is crisp in resolution but gets out of the way. The fact it includes navigation, DAB radio, wired Apple CarPlay and wired Android Auto is good. By contrast, the control interface – a dated trackpad – takes some getting used to.

That said, playing with the LC 500's screens is to miss the point of the car. The slinkiest Lexus is all about you and someone special getting away for a weekend. Yes, it's technically a four-seater, but clever folk will treat the back 'seats' as extra soft-bag storage, supplementing the compact 197-litre boot that fits two weekender bags without issue. 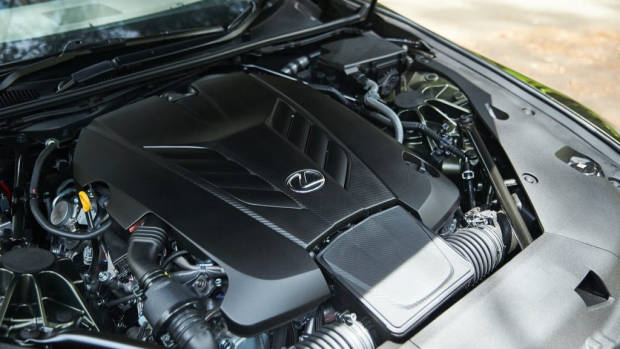 The grand touring attributes of the LC 500 reveal themselves almost immediately. This car is best on Australia's sweeping country roads, where it delivers a quiet, loping ride alongside the soaring sonorousness of the petrol V8 engine under the long bonnet.

It's fast, too. Even without the aid of a turbo, the LC 500 reaches 100km/h from rest just a tenth of a second adrift of the $120k-dearer Mercedes-Benz S560 coupe. Plus, the Lexus benefits from the immediacy of normally aspirated throttle response. Stroke the loud pedal and the engine darts towards the redline with no lag. 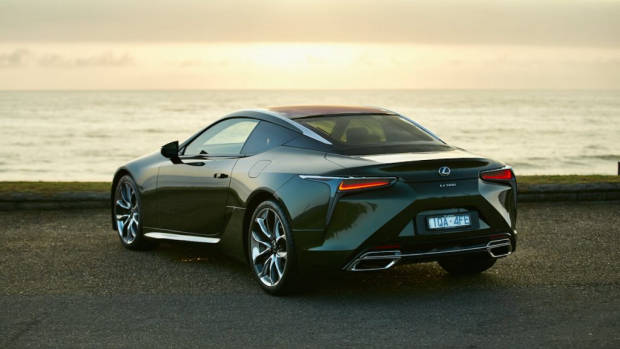 Usually, we'd prebook physiotherapy when looking at a set of 21-inch wheels and low-slung ride height. However, in a mark of how expensively the Lexus LC 500 is damped, this vehicle delivers a truly compliant ride in spite of is aggressive wheel and tyre package. The suspension operates silently, too.

The steering gives up nothing in feel to BMW's 8 Series, though the Lexus doesn't feel as small as the new 8er when pressed hard. It's not that you need to drive the LC 500 in a relaxed manner: let's say it is most comfortable being hustled gracefully. Sitting on the new Lexus TNGA-L platform, it is rigid enough to stand up to punishment, even if it is not particularly light. Many vehicles with high-powered V8 engines are great at high speeds but uncomfortable and unsettled in the suburbs. Not so the LC 500: the engine is happy to potter along under 3,000rpm with nary a whisper. Only parking is troublesome due to the unique styling and the odd lack of a 360-degree parking camera. You only get a (now old-school) reversing lens.

Exclusivity is the name of the game for the Lexus LC 500. While the company in Australia won't specify exact limits on how many are available to local buyers, we're told special orders remain open for both the V8 petrol and V6 hybrid variants. Once the Inspiration Series is no longer built, the regular configuration will continue to be offered, and that is hardly basic. 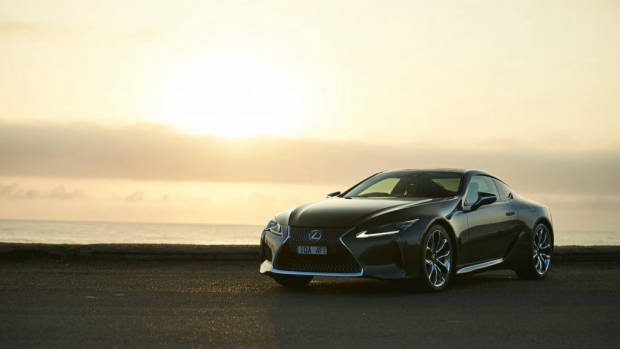