The BMW 8 Series is back - reinvented and reimagined for a new type of luxury buyer. Picking up the baton from the original E31 8 Series of the nineties, the second-generation of this opulent two-door has arrived in Australia in one top-specification trim dubbed the 2019 BMW M850i xDrive.

Positioned as a truly flagship vehicle, priced from $272,900 (before on-road costs), the new 8 Series represents a return to the full-size personal luxury two-door for BMW, with the near three-hundred grand price tag placing the M850i alongside rivals like the Porsche 911 and the fastest Jaguar F-Types. 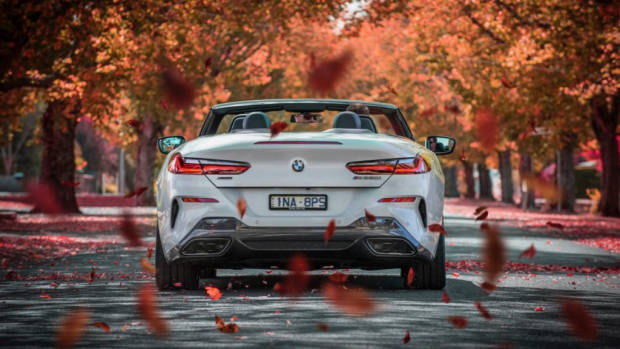 “The number one priority for the 8 Series was to be a sports car,” BMW product manager Brendan Michel told Chasing Cars on the launch of the new 8 Series in rural Victoria. The second priority was comfortable grand touring - not a particularly easy pair of goals to reconcile, though the 8 Series does a good job of providing some go-fast thrills with the ability to revert to a relaxed driving experience when required.

Giving the 8 Series a split personality of proper sporting ability and the kind of opulent grand touring dynamics that would fulfil its brief places the big BMW in a position of its own in the luxury market. Not quite as athletic as a Porsche 911, but more affordable and more engaging than a Bentley Continental GT.

The first variant to arrive in Australia aims more toward the sporty end of the comfort continuum. The M850i is technically a halfway-house to the full M experience, forming part of the M Performance range. In reality, the beastly performance of the M850i’s twin-turbo petrol V8 engine gives it more pace than most will ever need. 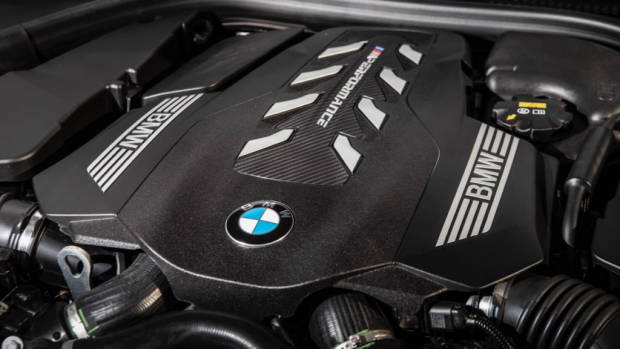 Producing huge numbers - 390kW of power and 750Nm of (almost instant) torque - the M850i coupe puts down staggering 0-100km/h times of 3.7 seconds, with the stunning drop-top convertible only two-tenths behind.

It manages to get into the threes due to the standard and mandatory xDrive all-wheel-drive system. This setup is rear-biased but with the vast twist running from the V8, in reality, this fast 8 Series is nearly always driving all four wheels in some capacity.

BMW purists will bemoan the proliferation of xDrive on the most powerful Bavarian machines - it is now fitted to the M5 super-sedan among others - the reality is that the cars are getting so torquey that rear wheel drive would be unruly in the hands of a trained driver and downright risky piloted by the uninitiated. 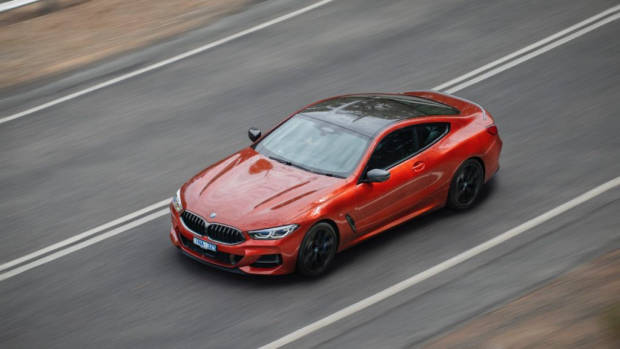 Accompanying the launch of the M850i was much-needed torrential rain in Victoria, which coated long-dry roads in a greasy sheen. No problem in the all-paw 8 Series: throttle stomping from a standstill rendered zero wheelspin. Likewise, you can be far more aggressive on the throttle on corner exit than in a RWD V8, with easy and instant traction. It is perversely addictive.

It is still possible to get the rear end to wiggle around behind you but it is certainly harder with so much mechanical grip on offer. Any complaints tend to disappear once you hear the V8 engine cracking through the gears, combining a seriously loud bellow with great burbles and snaps working through the eight forward speeds.

BMW have listened to feedback about the disappointing noise of the brand’s previous eight- and six-cylinder engines. At full noise, the 8 Series is intoxicating. 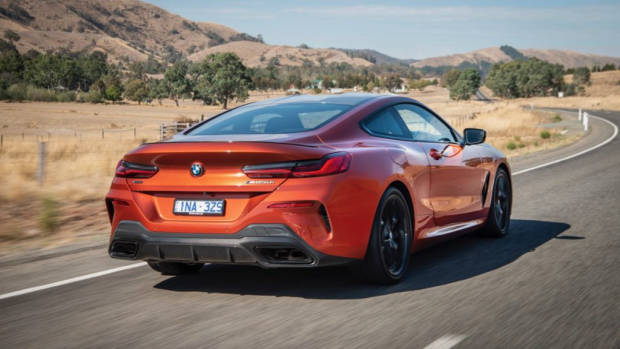 In future, an inline-six version badged 840i will arrive with around 240kW/450Nm. The 840i is likely to be trimmed as an M Sport vehicle, which is slightly less firm than an M Performance variant, so the ride quality may be slightly more plush on the six. The 40i will be cheaper, perhaps dramatically so, but the V8 will prove hard to resist.

It’s not that the M850i rides poorly - the opposite is true. The ride is compliant and never uncomfortable, but it is undeniably firm and the road surface can always be felt, even when the standard adaptive dampers are placed into their comfort setting.

We could happily live with the ride but those seeking a truly plush ride will need to look elsewhere. 20-inch wheels undoubtedly contribute and unfortunately, buyers cannot step the size back to 19”. Expect the smaller diameter to appear on the 840i. 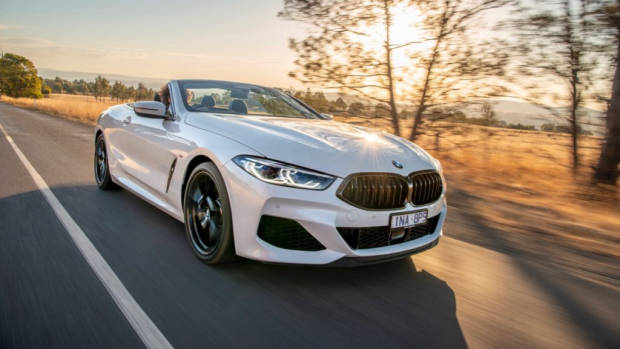 The twenties also throw up their fair share of road noise into the coupe, with more cabin noise than we’d like at over $270,000. The convertible is louder but the lightweight soft-top goes some way to explaining that.

The upside of the communicative ride is good handling around corners. This full-size coupe behaves like a sports car one size smaller, with no discernible body lean and zero squeal from the Michelin tyres that measure 275/30/R20 at the rear and 245/35/R20 at the front.

While the steering is more remote than we would like, the ratio is quick enough for a GT coupe with sporting intentions and the front end eagerly tracks your selected line, without any need for mid-corner adjustment. Mid-corner bumps, too, do not create a problem: the long wheelbase means the resolved chassis is never upset by unexpected bumps. The whole experience feels absolutely secure, with the M850i flattering its driver and rewarding those who push it harder and faster. We felt that we never approached the absolute limit of grip and we were trying pretty hard.

While the coupe is the better car for enthusiastic drivers, with greater rigidity and less weight partially thanks to a carbon fibre roof, the drop-top is extremely well resolved for a big convertible. There was no discernible scuttle shake on the brand-new example we drove hard. In fact, we found that an early morning open-top cruise in the $281,900 M850i convertible was something we could get used to…

Both body styles sport a beautifully-made cabin that basically features everything BMW can currently do with an interior. 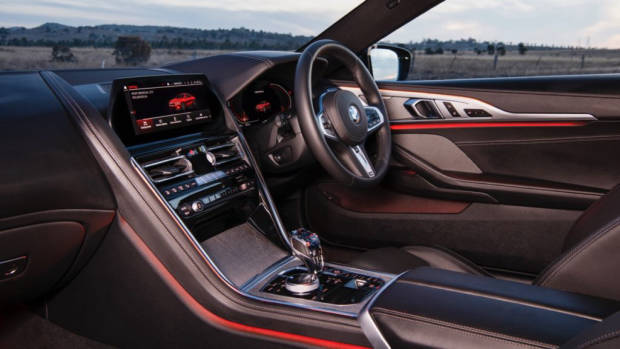 The four seats are trimmed in really supple Merino leather that is available not just in boring black but also in a variety of gorgeous colours at no additional cost. These include a fetching tan/navy two-tone that worked tremendously well. Red, white and a black/blue combination are also on the menu.

Nappa leather coats the dashboard and doors, with the whole space feeling as opulent as you would expect at this price point. With the exception of an audiofile-level stereo, everything is standard here. A 10.25-inch touchscreen runs intuitive software and the included Harmon-Kardon stereo sounds crisp enough for us.

Smartphones charge wirelessly or by USB-C (though there is a concession to old cables, with one last USB-A port), though we really do have to ping BMW for including Apple CarPlay for just one year. How cheap! A $13,000 Kia Picanto has CarPlay standard for life. Explanations offered by BMW for this nickel-diming were pretty feeble. 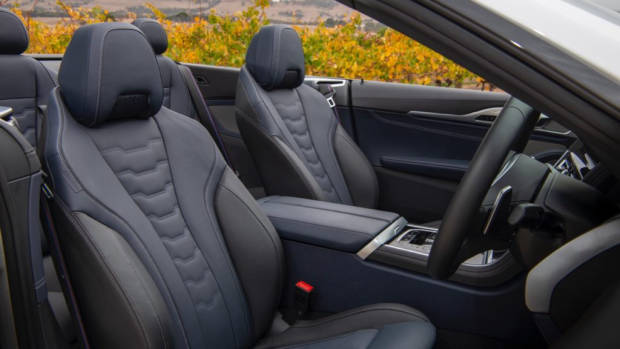 There is a back seat for two but it is tiny, so you’ll be best to keep it to kids or extra overnight bags, though the coupe’s 420L boot is spacious. In the convertible, space drops to 350L if you can commit to keeping the roof shut and a bit less with the soft-top open.

Cold weather is no hindrance to open-top motoring in the convertible, which attracts a $9,000 premium. While the coupe has heated seats as standard, the drop-top also warms the steering wheel and armrests, while there is hot air blown from the headrest at your neck. All very nice.

Those standing outside the car will remark that the proportions seem very right - not something we can say about every current BMW - and they’ll either like or loathe the considerable aural experience of hearing an M850i take off from a standing start. 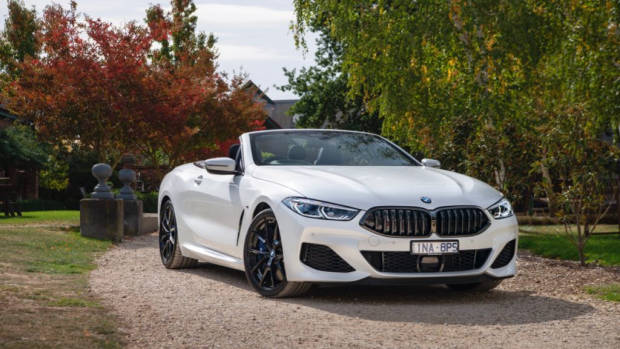 Like other BMWs, the M850i is covered by a three year, unlimited kilometre warranty which is lineball for the premium segment but disappointing compared to the five year standard of the mainstream end of the automotive market. Servicing can be prepaid at a discount, with two packages available that cover different levels of component replacement.

We’re thrilled that the new 8 Series is a great replacement for the original car. Sure, the M850i is a little excessive, both in its capabilities and its fabulously expensive price, but the 8 Series delivers a truly engaging experience. Fast, grippy and seriously luxurious, M850i ownership means you’ve made it. 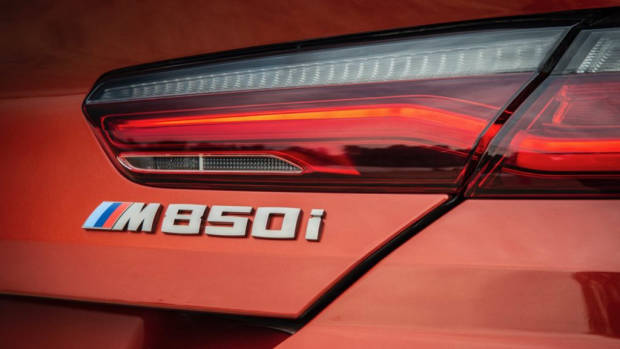