In a year, production of the last Australian-made car will cease.

That’s a terrible shame because Holden's final upgrade to the Commodore SS is an absolute cracker.

The $56,000 Holden Commodore SS-V Redline is the top of the range, and it offers the best value for money available on the market today.

Not only is the last SS great bang for buck – but it is a cohesive, premium-feeling sports sedan that evokes clear memories of the late 1990s BMW M5.

V8 up front, power to the rear wheels alone, a nice interior – and the feeling that you’re buying something very final and very special: the Holden SS is feelgood motoring.

As we said in our Chevrolet SS review – the rebadged American SS Commodore – this is a very approachable fast car, full of character, and easy to drive.

It says a lot that a friend of Chasing Cars experienced our press car from the video above, and immediately bought a Redline for himself.

The car has that effect on people.

As an Australian, it’s easy to fall into nostalgia about the end of Australian cars. So, in our week with the SS-V Redline, we thought a lot about whether this type of car is truly obsolete.

They use an awful lot of fuel and have eschewed turbocharging to the very end. They are huge, five-passenger cars in a time when Australians have just one or two kids. The Commodore is built by expensive labourers and it will be far cheaper to just import a German Insignia and call it a Commodore.

All those things are true – but it doesn’t stop the VF Series II from being the best car Holden built, and its inevitable departure from the car scene will still feel like a great loss. 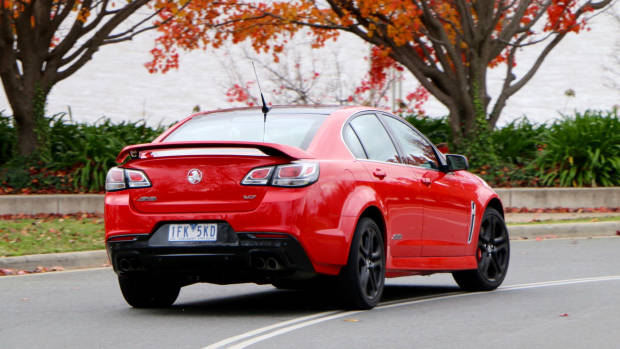 The original VF Commodore SS carried over the six-litre L98 V8 from the previous generation. With 270kW of power it was quick enough – but we were left underwhelmed by its quiet, subdued character.

All that began to change when we went away to California last year with Holden. There, we sampled the Chevrolet SS, an Australian-built Commodore badged as a Chevy, and fitted with GM’s much rowdier 6.2-litre LS3 V8.

Unsurprisingly, we loved the LS3 in the Chevy and while we were in the States, Holden made the call to upgrade the Australian-spec SS and fit it with the 304kW 6.2-litre.

That was a tremendous decision as the LS3 has lifted the SS from good to great.

The new V8 is not as powerful as the Ford XR8 – or even the XR6 Turbo – but it has bucketloads of character.

It can be docile around town if driven with a soft foot, but open it up and you’ll find a huge wave of torque and a glorious noise.

A Sports Exhaust mode is standard, and the SS is fitted with ‘Baillie tips’ – an exhaust component that makes the car even rowdier. From inside, the eight-cylinder symphony gets better the harder you push.

Changes to the suspension bracing at the front end has also eliminated much of the original VF’s blunt front-end heaviness. 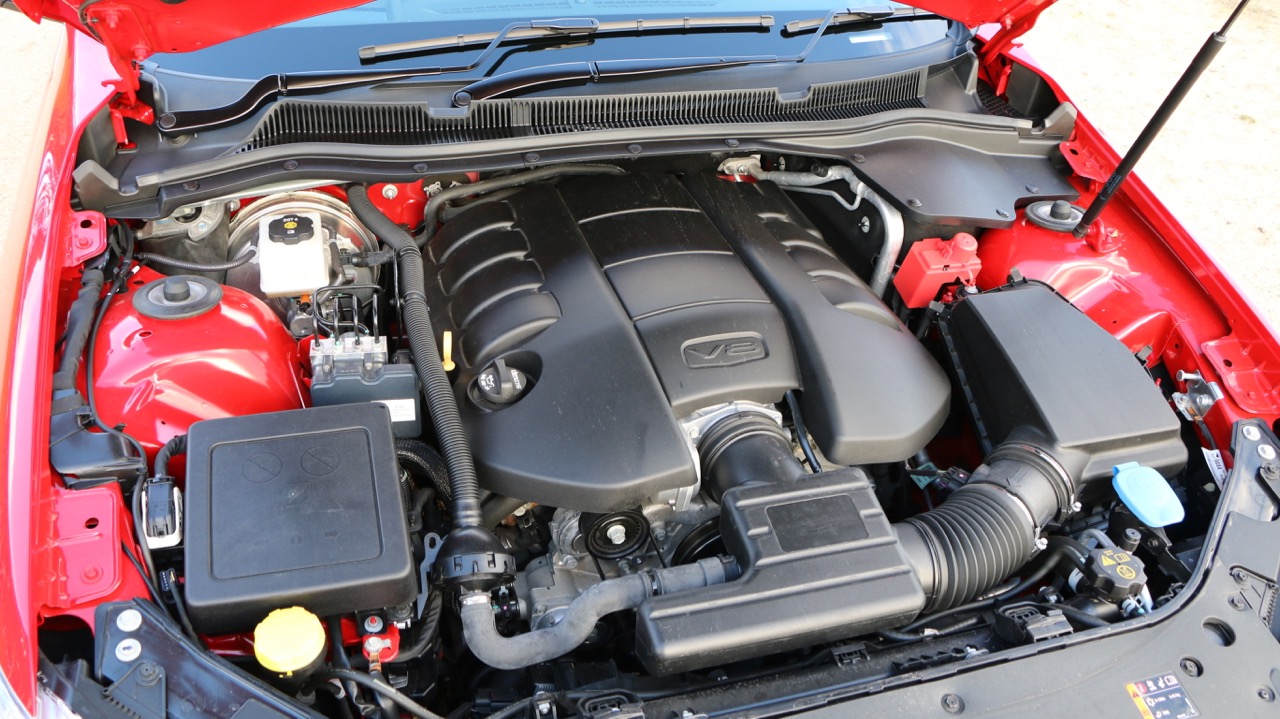 A six-speed manual is standard and suits the car: there is a short but heavy throw and a weighty clutch. You feel the meatiness of the car through the gearshift.

However, the paddle-shifted six-speed auto is excellent and you lose nothing by opting for the self-shifter: in the old car you were penalised 10kW for doing so.

With 304kW and 570Nm heading rearwards traction can be a problem on wetter roads and the SS is happy to spin the wheels in any of the lower three gears.

Redline models also score a Competitive mode on the traction control which allows for some playful rear-end slip before the system intervenes to straighen the car.

The steering rack is quicker than you might expect for a muscle car and, while straight line performance is the name of the game, the SS does a decent impression of a European around a mountain pass.

The car hustles around corners and generally feels smaller than it is when you press on.

Being Australian-made the suspension handles our varied roads impeccably, making the Commodore a comfortable cruiser. However, our Australian specification is still at a deficit to what we build for the Americans: the SS does not get GM’s fabulous Magnetic Ride Control, which takes the suspension compliance to another level.

While the SS is happy doing long distances, the new V8 worsens fuel consumption. Around town, 20L/100km is realistic; on the highway, about 11L/100km. 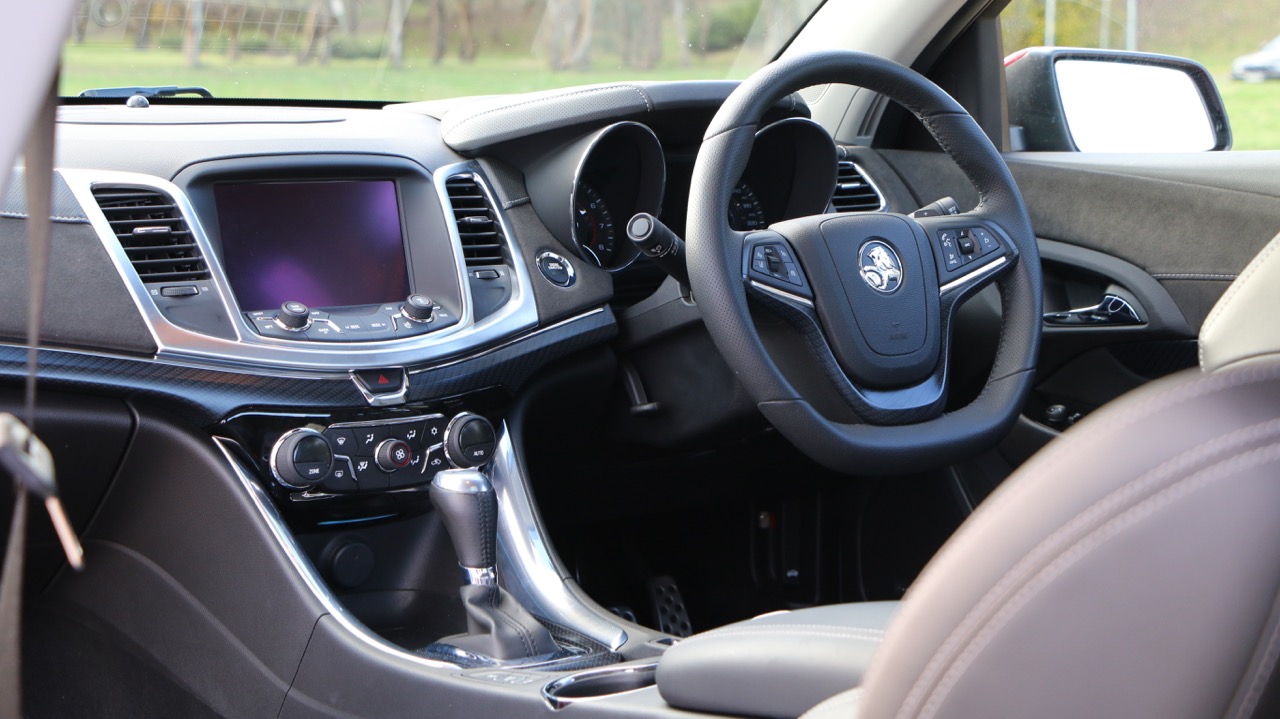 Little changed inside the SS with the engine upgrade, and that’s no bad thing.

The VF Commodore has an attractive and comfortable interior that, for the most part, is made of solid materials.

Like the Ford Falcon XR8, the SS is quite unique in that it offers very sporting performance with plenty of room for five.

Both front and rear seat accommodation is on the roomy side.

The front seats are broad and supportive for long distances, and are leather in the SS-V and SS-V Redline. Like the small, flat-bottomed steering wheel, the seats offer a good range of adjustment and we were all able to find a comfortable driving position.

The dash is trimmed in a complementary strip of suede-look material that lifts the presentation of this European-style interior.

An eight-inch touchscreen was revolutionary when the VF arrived a few years ago, but the graphics are now starting to date a little – and technologies like CarPlay are unlikely to make their way to the Commodore before the end of its run.

That said, the audio and climate button controls are easy to use and the SS-V’s head up display is absolutely fantastic. It’s bright and clear and can present speed, a tachometer, the speed limit, gear selection and song choice, keeping your eyes on the road.

It’s a little perplexing that the Chevrolet export continues to receive better seats, though – not only are the Chevy’s heated and cooled, but they are a slightly more comfortable shape.

In the back, the cushioned rear bench makes life very comfortable for two passengers although it is possible to fit a third adult in the middle seat.

Bose supply the stereo in the Redline model, though the quality is best described as fine. With that V8 purring away, though, there is plenty to listen to from under the bonnet.

When you’re not driving hard, the cabin is well-insulated from road and wind noise. 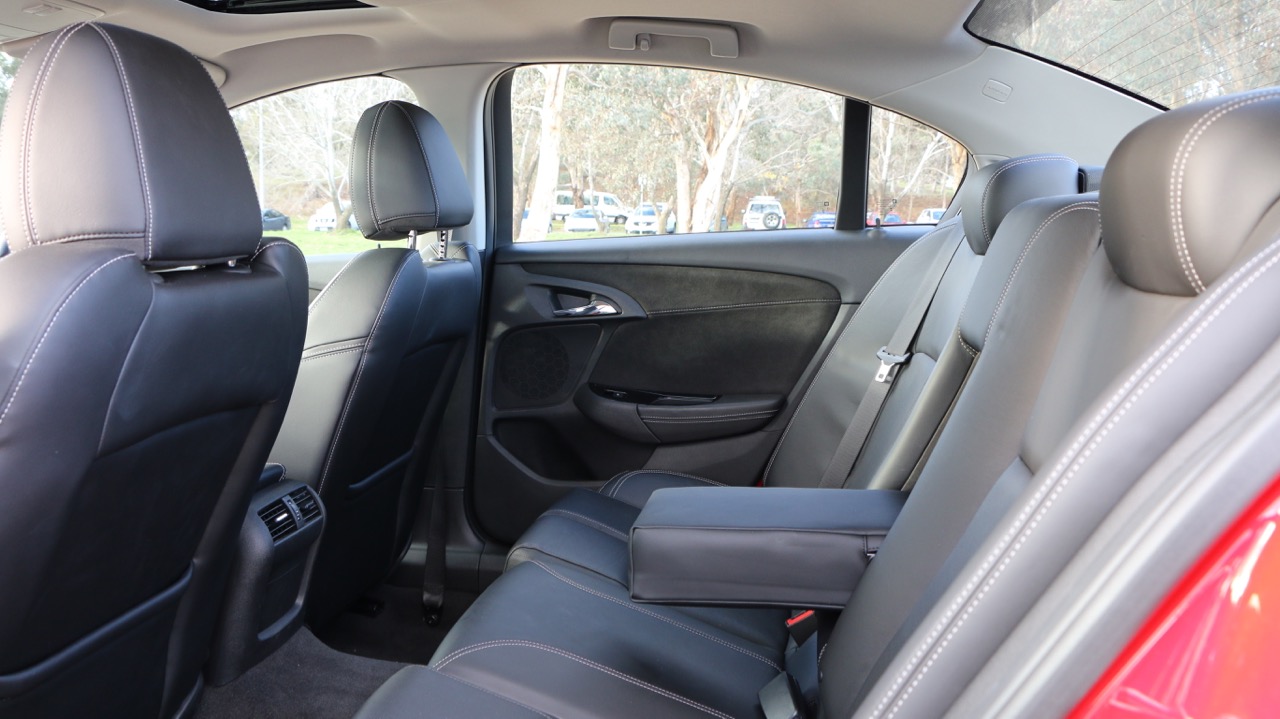 If it’s roominess you’re after, Holden will sell you a station wagon version of all of its models, including the top-end SS-V Redline.

Sadly the wagon is not available with a manual gearbox, but if you need a big 895L boot and folding seats, that will be the way to go.

Similarly, if a long tray sounds convenient, the SS range is still available in two-door ute format – though a 500kg payload limit means it’s not really a workhorse.

Most people will go for the sedan and live with its limits – the most annoying of which is the unavailability of folding rear seats.

That means the 495L of boot space under that lairy rear spoiler is all you get. Thankfully, it’s deep and squarely shaped, so fitting a few large suitcases is easily done.

In the cabin, the Holden offers plenty of storage space to stash everyday kit. There are two large cupholders up front – and in the back – and the door bins are nice and wide.

Plus, there’s a handy, rubberised tray ahead of the gearstick which is perfect for a phone.

Though the SS has a quick steering ratio, the size of the thing and relatively wide turning circle make manoeuvrability somewhat limited.

Compounding the problem are a pair of the world’s smallest wing mirrors – we were thankful for the Redline’s blind spot monitoring system. This really should be standard across the range. 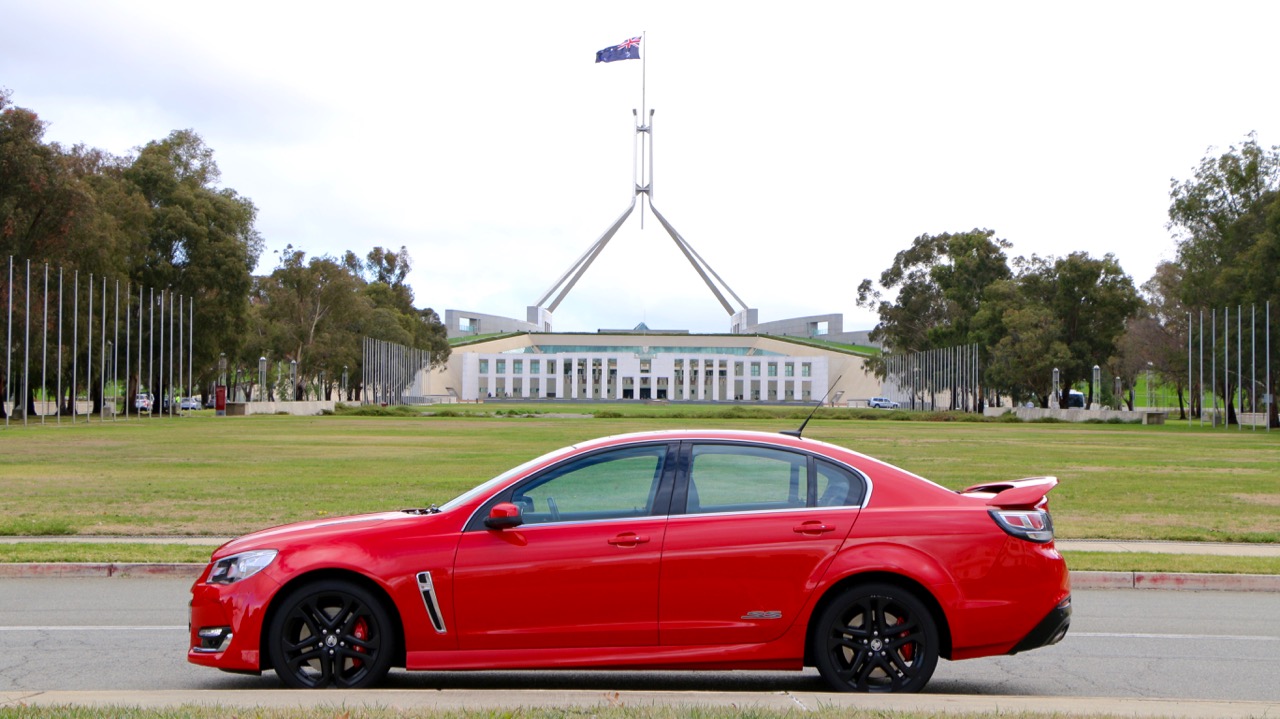 Most manufacturers will cap servicing costs for three or four years but Holden can quote a capped price for everything they have ever built – right back to a 1948 FJ.

For LS3-equipped SS models, the service intervals are every nine months or 15,000 kilometres; the first three years of that regimen will cost $956.

After that, servicing costs increase marginally to $299 every nine months.

These are honest and uncomplicated cars that use fairly bulletproof GM pushrod V8s. These engines will be produced for several more years; the fact they are used in millions of GM cars worldwide gives us confidence.

Reliability has been mixed for VF Commodore owners, with some reporting electrical gremlins with the interior electronics, though serious mechanical problems are few and far between.

Holden’s very wide dealership setup and quality servicing for Australian-built cars will not change after the brand switches to an import-only business.

While predicted Commodore SS depreciation is quite poor – Glass’s Guide indicates that the SS-V Redline will retain just 47% of its value after 3 years – we can’t help but feel there are two other factors at play.

First, many buyers will be collectors or intending to keep the car for many years; secondly, there will be buyers looking for pristine examples of Australian-built SS models in the years to come. For what it’s worth, Falcon depreciation is no different.

Finally, a note on the running cost of fuel: while the 6.2L SS is a heavy drinker – let’s say it averages 15L/100km – the low cost of buying the car is important to remember. The SS outperforms many expensive European cars. Buying the SS instead will leave enough money to fill it with petrol for decades before catching up to a Euro pricetag. 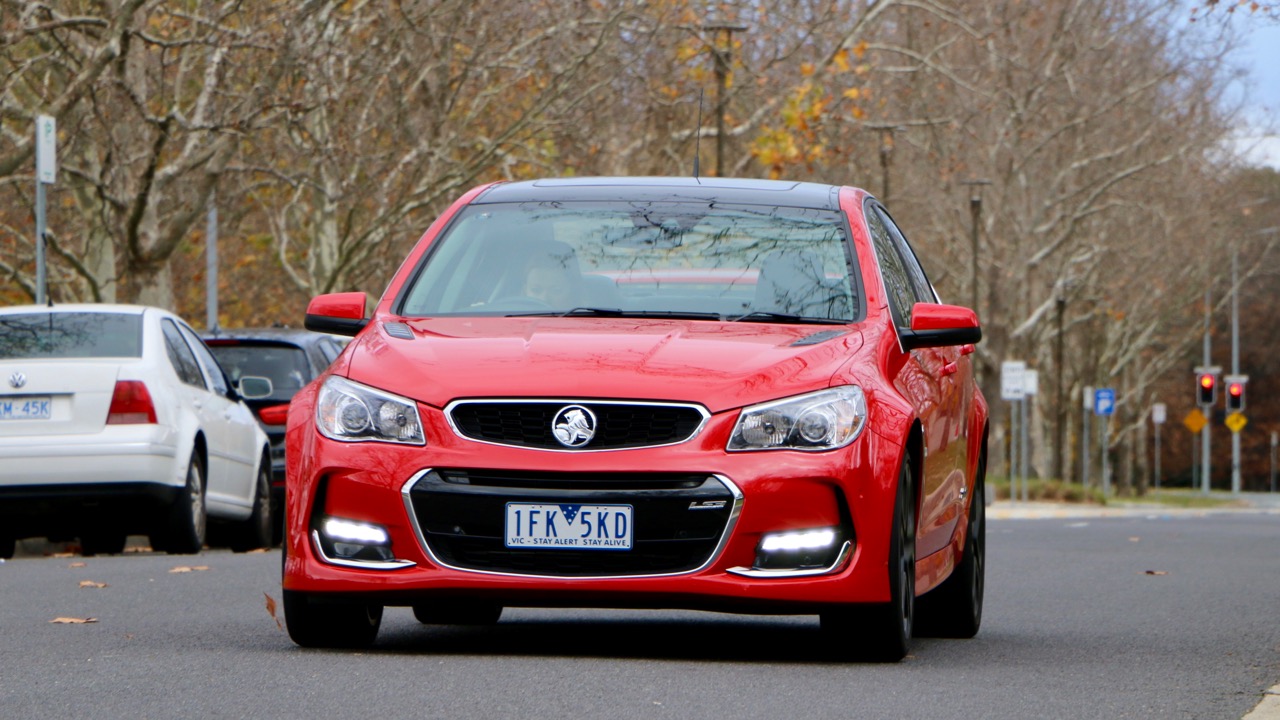 The basic SS is truly excellent value. The manual is just $44,990 – every kilowatt of power costs just $149, compared to, say $268 per kilowatt for the Volkswagen Golf R.

However, the SS is basic, with 18-inch wheels, fabric seats and no navigation. Occasionally, though, the base car is offered as a special edition which adds extra equipment.

Next up is the SS-V at $48,490. This middle spec adds leather seats and a head up display, automated parking,

The SS-V Redline is the car to buy if you want the best of the last Commodores. It’s $54,490, but adds advanced safety technology, a sunroof, Bose audio, bigger, black wheels – plus performance Brembo brakes and the Ultra Sports suspension setup.

Our recommendation? Just buy the SS-V Redline manual sedan. Add $550 for a metallic paint – Nitrate Silver is our preference. Other options available are a black roof, a full rear wing and forged alloy 20-inch wheels.

All told, you’re out the door for less than $60,000 and we hear even sharper deals are possible.

The SS-V Redline is about a thousand dollars dearer than a Ford Falcon XR8. The Ford might have a supercharged eight, but the Commodore feels and drives like the better car.

The only other muscle car at this price point is the Chrysler 300 SRT Core at $65,000 though the 300’s gangster aesthetic may rule it out.

As mentioned above, the direct competitors to the SS-V Redline are limited to large sedans offered by Ford and Chrysler.

Ford’s Falcon range finishes local production even sooner than the Holden, and the Chrysler 300’s future is in doubt.

That said, muscle cars will continue on in Australia. Ford have already brought the Mustang with a five-litre V8 and Holden are deep in talks to bring either the Corvette or the Camaro here, too.

For now, at this price point some will consider smaller options – the Volkswagen Golf R, Audi S3, BMW M135i crowd – though the fundamentally different character of a hot hatch means it’s hard to draw the comparison.

That said, we have included them all in this list of options to consider closely. 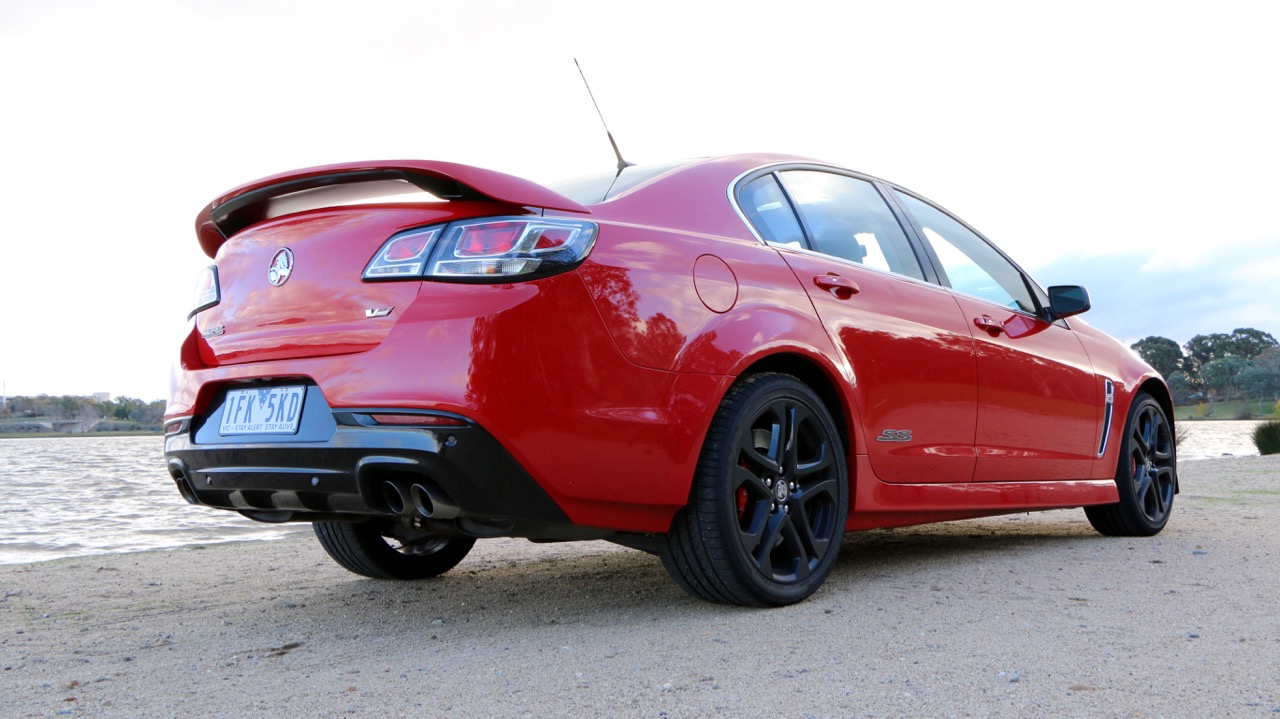