The Lexus NX300h is late to the small, premium SUV segment — but this is a crossover that looks great, is generously appointed, and well-priced to compete strongly with the Germans.

They've had plenty of time to study the competition, like the Audi Q5, BMW X3, and Volvo XC60 (watch our Volvo XC60 review). So, it's no surprise that Lexus's debut into the segment is thoroughly convincing. The NX is the size of an Audi Q5 or a BMW X3, but it competes on price with the smaller siblings to those cars: the Q3, and X1.

The NX employs the traditional Lexus formula: undercut the Germans on price while bundling most German options as standard features. Couple the favourable pricing to youthful, fresh looks, and to a reasonable driving experience, and from the outset, the NX looks like an attractive proposition.

ChasingCars.com.au borrowed this vehicle for our Lexus NX300h review:

From the outset, it's clear that Lexus has designed a beautiful chassis for the NX. This is a taut and stable SUV. The limited ride height generates a low centre of gravity—while there are no pretensions of actual off-roading to be found, the admission that small SUVs are road-dwellers is a sensible one. Toyota and Lexus's company-wide commitment to enhancing the fun factor of their ranges is totally evident in the way the NX corners. It's surprisingly direct and satisfying to throw through bends, although feedback and feel are still a little numb, particularly compared to the BMW.

Lexus have built a convincingly sporty SUV in the NX. You know it from the way it corners, from the low-slung driving position, and from the firmer-than-average suspension. But you don't know it from the engine—at least not yet.

The NX's biggest problem right now, is that until 2015 it is available exclusively with Lexus's four-cylinder petrol-electric hybrid motor. The power figure—147kW—looks fine, but 210Nm of torque is anaemic, and insufficient to shift the 1.8-tonne weight with vigour. The diesels of the German competition, while gruff, are at least satisfyingly torquey. The NX300h is slow to accelerate, and paired to a conventionally-variable automatic that drones, it doesn't reward the driver that pushes hard. It promises, and delivers, exceptional fuel economy; not exceptional fun in a straight line.

Thankfully, the fix is imminent. The second engine to debut—at a price premium—will be the first turbocharged unit ever deployed by Lexus. We're confident that the two-litre turbo petrol will deliver the punch and power that the NX's athletic lines suggest. We'd hold out until that motor debuts. 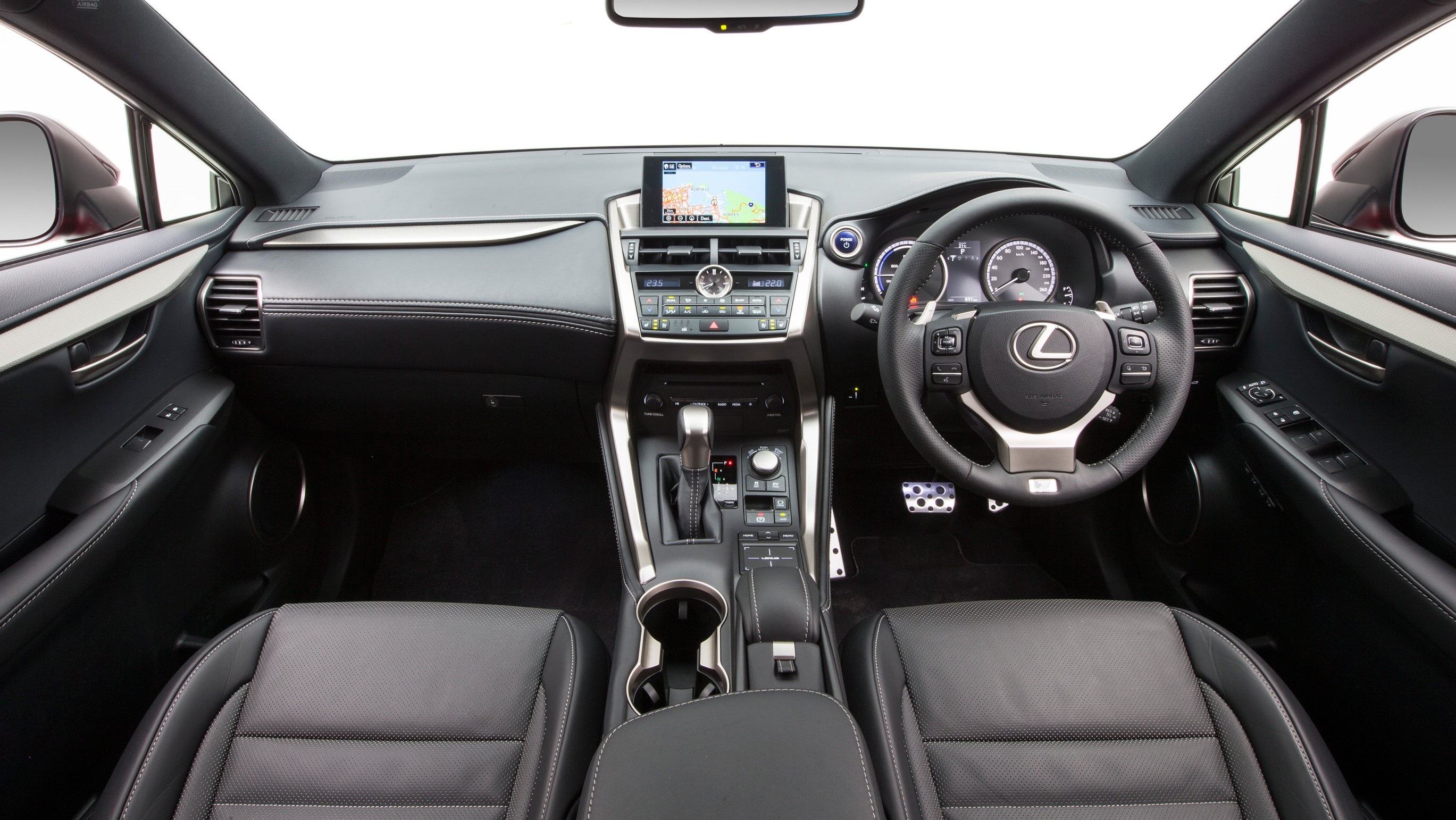 Great seats shouldn't be underestimated, and the NX's front buckets are pulled straight out of the IS F Sport sedan. That car is notorious in our office for its focussed driving position—so, a good start. The NX does feel focussed behind the wheel, with adequate bolstering and soft leather in the pews, and a small, perforated steering wheel with paddles.

The NX is a size larger than the cars it is priced against, and you benefit from that extra capacity. Five people are accommodated quite easily; four will be very comfortable in the NX on long trips. The outboard seats in the back are sculpted and they recline, plus there's length-defying legroom and decent headroom for your passengers, too.

Lexus's recent dashboard design started as minimal (in the LS and GS sedans). As the company has developed the style for newer models, it's run into the industry wind by adding to the button count. The NX's dash is busy, and to the non-enthusiast, initially intimidating. A crisp seven-inch screen sits atop audio, climate and drive mode controls, plus the new touchpad controller for the navigation. Still, within a week, most functions become clearer. But things in here aren't as easy to learn as on the BMW X1.

At least it's easy to pair your phone. Bluetooth streaming is clear and defined over the standard stereo (an impeccable Levinson unit is standard on the expensive Sports Luxury). You get your song names, and navigation previews, between the tachometer and speedo. Voice control, in theory a brilliant idea, still struggles to be usable to any degree beyond making phone calls, in the Lexus.

One cool feature inside that deserves a special note is the NX's standard wireless charging function for phones. Some Android phones can do it out-of-the-box; iPhones need a special case. But if you're willing to buy that, then you can place your device on the centre console pad—no wires involved—and watch it charge as you drive. Great.

The NX isn't intimidatingly large. The spacious cabin, then, is a pleasant surprise. It's large and comfortable inside, and airy too, if you opt for the sunroof. If not, then the all-black tones inside the F Sport can be just a little oppressive. The NX conforms to Lexus's traditional space efficiency: there's not a lot of dead space. There's plenty of room in the back for your passengers, but up front, space is dominated by driving controls, or cubby spaces for your everyday clutter.

Futuristic designs outside usually limit practicality inside. Lexus has managed to, mostly, defy this rule. The boot is capacious (475L), and all cars feature an electric tailgate as standard. The back seats are easy and light to fold, tripling the normal boot space if your demands exceed it. There's also very reasonable storage space throughout the cabins. The central bin, underneath the wireless charger, is deep. The door bins are wide.

As with all Lexus models, you are essentially banking on proven Toyota reliability, and it's true that little goes wrong with them. The servicing experience is also premium. They'll pick up the car for its services, and leave you a loaner Lexus in your driveway. Not bad—but it should be, as there's no capped-price servicing to limit your maintenance costs from the outset.

You can make reasonable assumptions about the other side of running costs—fuel economy. We are critical of the hybrid's dull response, but we give it credit for delivering efficiency very close to the official figure. We observed figures in the low 7L/100km range in average driving conditions. The NX is happy to drink regular fuel, too; most German petrols exclusively take premium.

While the safety agencies haven't yet purposefully crashed the NX, its eight airbags and variety of active systems give us confidence. It's a shame, though, that more advanced safety technology – like full automatic emergency braking, active cruise control, and lane keeping assist – isn't standard across the range. After all, the NX is a premium model, and Lexus had an opportunity here to lead the pack on safety. Those features are standard only on the $83,000 flagship, or a very expensive option on the lower models. However, both the F Sport and the Sports Luxury benefit from a standard, very safe around-view camera, that projects a top-down view of the car while parking, allowing you an incredible view of the obstacles around the car.

Three trims determine the Lexus NX300h price in Australia. The entry-level car, called the Luxury, is great value in $60,000 all-wheel-drive form (although a price-leading $55,000 front-wheel-drive version is available). The F Sport, technically mid-range, looks the most convincing of the bunch, and some will choose it for that factor alone. The Sports Luxury is conservatively dressed, and pricey at $83,000, but you'll struggle to identify a missing standard feature.

You can't even option up the flagship car; everything's included. But those wishing to have all the features with the F Sport body can tick the $8,000 'Enhancement Pack 2' on that car, which bundles a sunroof, great stereo and lots of safety features. Opting for the $4,000 'Enhancement Pack 1' on either of the lesser trims nets the sunroof and stereo only.

Mercedes-Benz GLA250 4MATIC ($58,600 list | on road not disclosed): Close to the NX in price, but relatively dwarfed by it in presence and interior space. The GLA250 is a turbo petrol, and the drivetrain is pretty sweet; the cabin, inspired by the A-Class, is also more refined to look at. The options list, though, is long.

Audi Q5 TDI quattro ($62,600 list | $69,990 on road): Clearly more expensive, and actually quite old, now. The Q5 has been on our roads for six years. The cabin is still clean, simple and comfortable, but everything seems a generation behind. They're everywhere, though, and that says something about how convincing the Audi is.

BMW X3 xDrive20d ($64,400 list | $71,718 on road): The X3 is pretty much designed for the American market, but it has been fairly successful in finding Australian homes, too. Like the Audi, it's a class more expensive, but polished diesel and petrol motors, a good cabin, and the sporting cache of the badge increase this option's attraction. 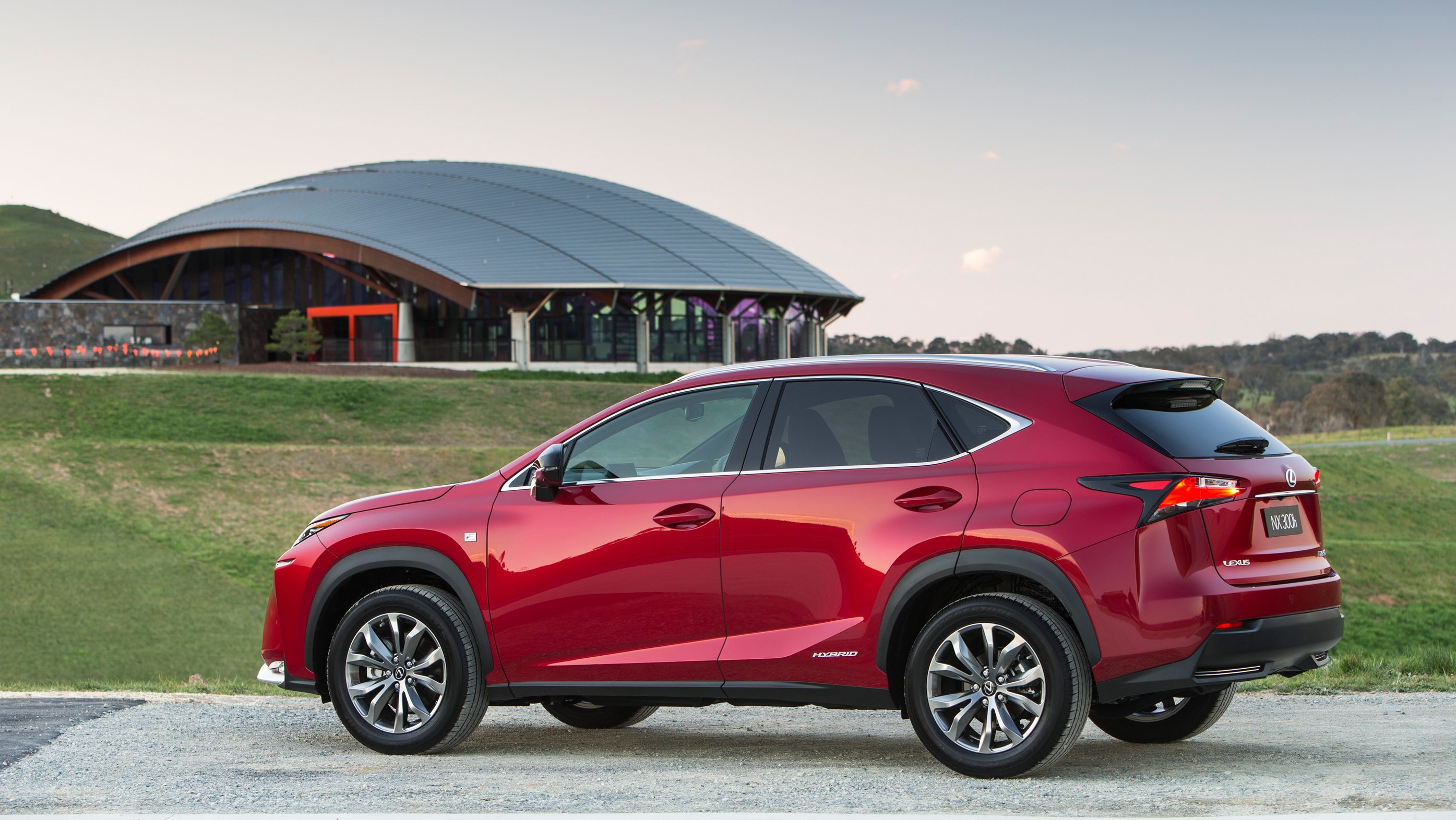