Cadillac has launched a hot V-series Blackwing version of their CT5 large sedan that has key German super-saloon rivals in its sights.

The 2021 Cadillac CT5-V Blackwing large sedan has been unveiled this week alongside its sibling in the form of the midsize CT4-V Blackwing – but despite Australia’s healthy appetite for high-performance four-doors, neither Caddy will be coming to Australia in the near future.

As with most American sports cars, the Blackwing’s focus lies squarely on the engine. In the case of the CT5-V Blackwing, motivation comes from a supercharged 6.2-litre V8 engine producing 498kW of power and 893Nm of torque.

That’s more shove than the recently released BMW M5 CS, which makes use of a four-litre twin-turbo V8 to produce 467kW/750Nm.

What’s more, the Cadillac seems determined to capture the heart of the car enthusiast by offering a six-speed manual transmission as standard fit, while a ten-speed torque converter automatic is an option.

The manual transmission is also offered with an auto-blip function that automatically raises the revs so you can shift gears without touching the throttle, similar to the BMW M2 or Hyundai i30 N, to make the stick-shift easier for inexperienced drivers.

Drivers who plan on taking their CT5-V to the track will welcome the no-lift-shift function which allows the brave to keep the throttle pinned on the straights.

The CT5-V Blackwing sends all that power straight to the rear wheels, where an electronically controlled limited-slip differential attempts to keep things under control.

Cadillac says this super-sedan is their most powerful model ever and when it hooks up to the bitumen it will accelerate from 0 to 60mp/h (97km/h) in 3.7 seconds (with the automatic) and has a top speed in excess of 321km/h.

The CT5-V Blackwing is even more powerful than the final and most powerful HSV version of the Holden Commodore. The 2017 HSV GTS-R W1 also utilised a supercharged 6.2-litre petrol V8, but produced 474kW/815Nm – five per cent less power and ten per cent less torque than the Cadillac.

To keep things under control in the corners, Cadillac has fitted Macpherson strut suspension at the front and five-link independent suspension at the rear, with a shock tower brace and thicker rear cross members to keep the chassis stiff and predictable.

Similar to its full-size SUV cousin the Cadillac Escalade, the CT5-V Blackwing uses Magnaride dampers which can automatically adjust to enhance cornering performance or to provide a smoother ride.

Bringing the large sedan to a stop are a set of six-piston front and four-piston rear Brembo brakes that clamp down on rotors measuring 398mm at the front 373.5mm at the rear.

Buyers can upgrade to high-performance carbon ceramic disks which will not only provide better braking performance but cut down weight with a 24kg reduction in unsprung mass.

A set of 19-inch forged wheels as standard on the CT5-V Blackwing with a staggered setup for the Michelin Pilot Sport 4S tyres which measure 275mm at the front and 305 at the rear.

Cadillac has extensively track tested both the CT4-V Blackwing and CT5-V Blackwing and say the sedans are built with components designed to take the abuse, with both the engine and brakes engineered to suffer less heat issues when under stress.

Ed Finn, the General Motors communications coordinator, said that General Motors in Australia was currently only focusing on the Chevrolet Silverado and inbound C8 Corvette and would not speculate on additional models. 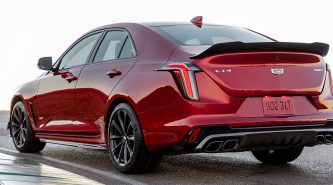 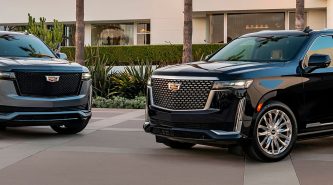