It’s a sunny November afternoon in 2003 and I’m sitting at home watching Petter Solberg slither through muddy welsh forests in his bewinged blue and dayglo-yellow Subaru Impreza WRC to snatch Subaru’s last ever World Rally victory by just a single point. That year of WRC cemented my love of cars, and Subaru was the brand I cheered for (and have gone on to spend way too much money on die-cast of!). ‘All 4 The Driver’ was the brand’s slogan back then, and it was true. Everything from the base Impreza and Liberty to the barnstorming turbocharged models were great to steer. But the last decade has seen Subaru’s focus on driving enjoyment ebb away almost entirely, replaced by a concentration on comfort and safety.

Initially launched in 2017, the fifth-generation Subaru Impreza embodies the brand’s new direction: it’s a soft, safe, practical small car, and not one aimed at driving enthusiasts. When the new shape launched, we found it comfortable and easy to live with – though we had our concerns about the suspension’s competence on pockmarked Australian roads. This year, it’s facelift time – and along with tweaked styling, there are more significant changes under the skin to address a number of chassis elements with the goal of making this Impreza a more secure handler at higher speeds.

Powertrain-wise, though, there’s still no favours thrown to Subaru fans of old – there’s just one modest 2.0-litre naturally aspirated Boxer petrol engine producing 115kW/196kW. Unlike the updated 2020 Forester and XV – itself a lifted Impreza – there is no hybrid option, nor is there a turbo version like in many other small cars – the Volkswagen Golf and Ford Focus included. So, with more value added, has the Subaru Impreza been lifted in our esteem? With minor changes to the wheel designs and front bar, the Impreza is an inoffensive but reasonably handsome vehicle – it just blends in. This isn’t a car for extroverts. We had both the sedan and the hatch on test, and even the range-topping $31,160 ($35,090 driveaway) 2.0i-S four-door finished in ‘Pure Red’ didn’t really stand out. Blink and you’ll miss the styling updates for 2020, too, limited to a slicker looking front bumper with a single lower vent (where three separate vents were before) and refreshed tail-lights. While the ‘S’ variant’s 18-inch wheels do add aggression over the 17-inch items fitted to the $28,590 ($32,440 driveaway) 2.0i Premium hatch also tested, the bigger wheels naturally have some tradeoffs which we’ll get to later.

Inside, the interior is a pretty dark space if you opt for a black-coloured interior – though lighter and brighter ivory coloured upholstery, in cloth or leather depending on grade, can be optioned at no cost. Both our test vehicles were fitted with a sunroof, though the lower two grades – the base 2.0i ($23,740, $26,380 driveaway) and 2.0i-L ($25,860, $29,610 driveaway) go without this luxurious touch. Thankfully, the light headliner brightens the ambience.

Sitting proud in the Impreza’s cabin is an eight-inch touchscreen on the higher grades (lower models do with an inset seven-inch version). The bigger screen has great resolution and looks crisp, though the integrated maps – plus Apple CarPlay and Android Auto – can be a little laggy and the surface catches the sun too often. Then there are two other screens – a high set trip computer, and a colour display between the gauges that duplicates a number of trip screens. With controls for these screens scattered across the otherwise attractive, well-sized leather steering wheel, there’s a learning curve to mastering the tech. 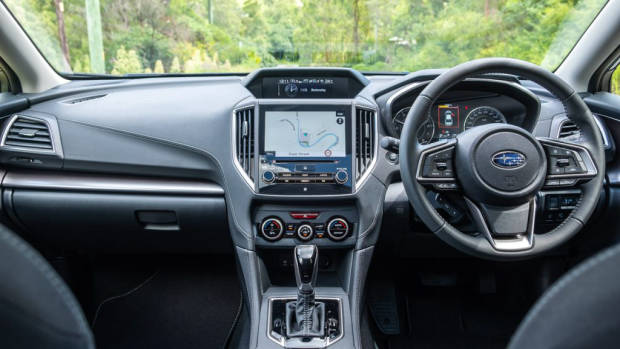 The hatch we had on test was the second-from-top 2.0i-Premium, which offers up manually adjustable cloth seats, while the flagship 2.0i-S variant steps up to leather upholstery in black or – our preference – ivory. The front pews in the S are heated, while the driver enjoys electric adjustment and two-position seat memory. If you share the car with a partner it’s worth the extra cash for those handy memory chairs. Otherwise, the seats themselves are soft and comfortable, whether it’s leather or cloth.

There’s plenty of room on offer in the rear quarters, too. At six foot two I fit comfortably behind my own driving position in the sedan. The hatch is a little more compact, though I was still comfortable for a good amount of time. Boot space is class competitive; 460L in the sedan, 345L in the hatch – though we note the Impreza makes do without handy touches like tabs to lower the back seats from the boot, as seen in the 2020 Honda Civic. Overall, it’s a more luxurious interior than many competitors, with lashings of soft padding found under the elbows and on the sides of the transmission tunnel.

That same more-luxurious-than-you-expect trick continues around town where Subaru has quelled NVH almost entirely: the Impreza is a little isolation tank. Rarely were there any unpleasant frequencies transmitted into the cabin, even on badly potholed roads. With the smaller 17-inch wheels on the 2.0i Premium, the Impreza rides speed humps and expansion joints with aplomb. Sadly, stepping up to the 18-inch wheels of the 2.0i-S introduces a harsher edge to the ride, and the Yokohama Advan Sport tyres have a knack for flinging stones around in the wheel arches. 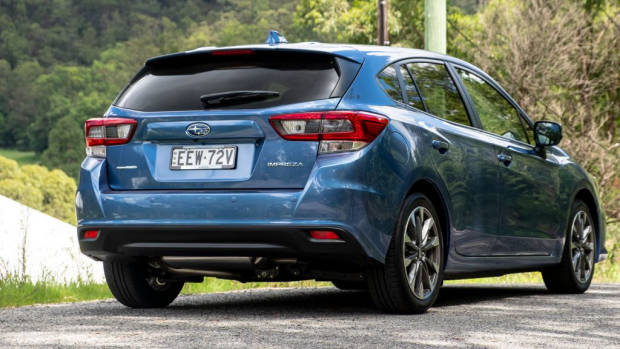 Unfortunately, the Impreza is let down by its old-school powertrain. The naturally aspirated two-litre boxer four-cylinder musters 115kW/196Nm, though the headline power and torque figures don’t arrive until the engine is working hard at 6,000RPM and 4,000RM respectively. Fuel consumption wasn’t hugely impressive, registering around 9.0L/100km with a mix of highway and city driving. Combined with a shuddering, generally unpleasant CVT automatic – Toyota’s are much better – and a reasonably hefy 1,398kg kerb weight, thanks to the standard all-wheel-drive, the Impreza’s powertrain comes off as fairly modest indeed.

That’s a shame, because Subaru has really improved the Impreza’s chassis for 2020 – this car deserves more shove! Traversing larger compressions on country roads at speed, there’s a hint of float, especially at the rear, but the dampers work fairly well to cinch the movement in when driving normally. The Impreza never feels darty or lithe, but it displays a very neutral balance when pushed hard. Combined with Subaru’s proper all-wheel-drive system it makes for a very dependable companion in adverse conditions.

The lower-grip Turanza T001 tyres fitted to the lower grades (including the 2.0i Premium) are well suited to the chassis – the grippier Yokohamas on the 2.0i-S didn’t let the Impreza dance around nearly as much. When it was moving around, the ESP intervened almost imperceptibly, gently arresting body movement. Naturally, dirt-roads were sought out to test the all-wheel-drive system and Subaru’s system shines a lot brighter than the Haldex-type systems found in some of the Impreza’s rivals. 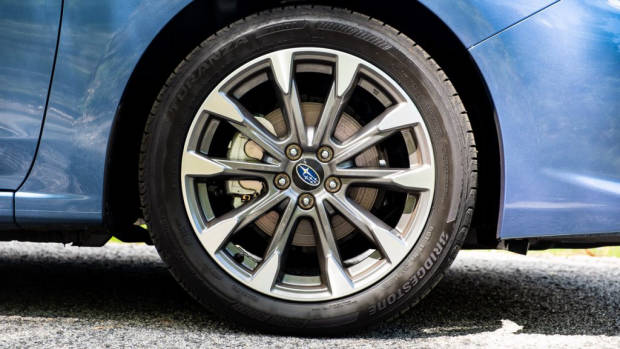 Subaru’s rangewide inclusion of their Eyesight active safety suite is the biggest on-paper news. This suite includes high-speed AEB, adaptive cruise control, a left-side parking camera, and lane keep assist – though the latter is poorly tuned, often failing to pick up lane markings. There’s driver assistance in the form of object detection, too, with hilarious video game-esque graphics when a car in front is detected. The name ‘Eyesight’ hints at the fact the system relies on twin cameras, which, in the heavy rain experienced on test, can cloud the lens, disabling the tech – making us wonder whether rivals’ increasingly common LIDAR-based systems have an upper hand. Oddly, only the range-stopping S variant gets auto high beams and wipers, too – it’s ‘DIY Vision’ on the rest of the range.

While the Subaru Impreza isn’t the hottest small car on the block, the updated chassis tuning and extra standard safety equipment make the Impreza a tastier offering for 2020 – though the package is still let down by that anaemic engine/gearbox combo. The real highlight is the well insulated, comfortable appointed interior. Subaru definitely thought about where soft-touch materials were needed to maximise comfort, and have done excellent work isolating the driver from unpleasantries. As for value, no other hatchback offers such a good AWD system, and few match this car’s level of refinement. We’d buy the more spacious sedan in Premium trim, the smaller wheels offering better ride comfort and the cloth seats never burning you on a hot Aussie day. 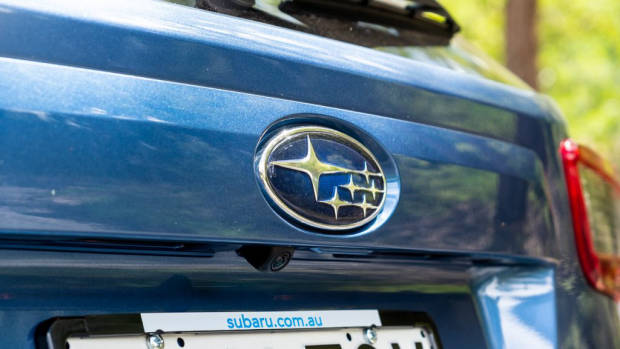