It’s been a long time coming, but the Mazda CX-5 – Australia’s favourite SUV for the past six years – now has a premium turbo petrol engine option, inherited from the CX-9.

Two weeks before Christmas, Mazda have delivered a present to Australians: the nation’s best-selling SUV has finally pulled into pit lane to receive a more potent petrol engine. Though the Mazda CX-5 has always offered a strong turbo diesel engine, in the gasoline department, this popular crossover has soldiered on with a merely average pair of naturally aspirated petrol four-cylinders – even as the competition left the CX-5 in the dust engine-wise, bolting powerful turbos to their volume-selling engines. Not that this situation seemed to bother buyers – few people seemed turned off by the CX-5’s long-standing aspirated engines. But the times, they are ‘a’ changing, and as of this week, the CX-5 has gained the option of the turbocharged four-cylinder petrol that has seen service in the seven-seat CX-9 for the past couple of years. It’s a 170kW/420Nm single turbo unit displacing 2.5 litres – the same capacity as the existing 140kW/250Nm aspirated petrol that continues on as the standard engine in the all-wheel-drive CX-5. Low-end front-drivers continue to use a two-litre atmo unit making 115kW/201Nm, while the superb twin-turbo diesel option, a 2.2-litre making 140kW/450Nm, remains the range’s premium engine.

Australian interest was a key contributing factor to the addition of the turbo petrol as an option for the CX-5. The turbo arrives as a not-inexpensive $2,500 option on the CX-5’s top two grades – the GT turbo is $46,970 (driveaway pricing to be confirmed), while the Akera turbo lists for $49,170. The diesel costs $500 more on top of that. 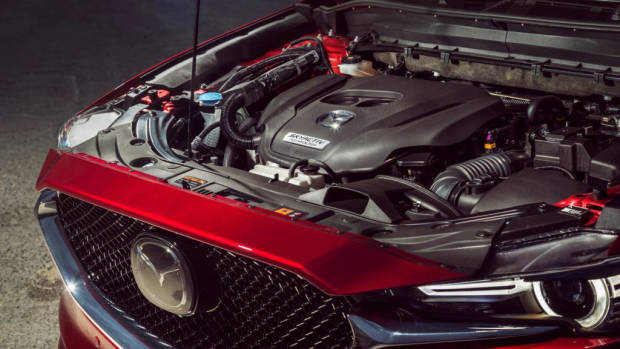 On paper, the 170kW CX-5 turbo petrol looks like it’d spell trouble for the competition. Most of this Mazda’s rivals offer a turbo petrol, either as standard – as per the Volkswagen Tiguan, Skoda Karoq, Ford Escape, and Holden Equinox – or as an option, in the Hyundai Tucson. And while the 188kW/353Nm Equinox and 178kW/345Nm Escape have more power, with 420Nm, the CX-5 blows everything out of the water for torque. In fact, the petrol Mazda has more torque than most diesel units in this segment.

And then there’s the performance benchmark among midsize SUVs: the Volkswagen Tiguan 162TSI, which makes ‘just’ 162kW/350Nm but manages to put down a 0-100km/h run in just 6.5 seconds. So expectations on Mazda’s turbo entrant to provide the CX-5 with a performance edge have been running high, since Chasing Cars exclusively broke the story in August this year that the CX-5 turbo petrol was locked in for the Australian market.

Four months later, we’ve got the car in our garage for testing. So, does it live up to the hype?

In many ways, it does. Certainly, the turbocharged petrol CX-5 represents a great leap in capability over the naturally aspirated 2.5-litre: the turbo unit is faster, quieter, smoother and more refined than the slow and relatively coarse old atmo, whose 250Nm was simply insufficient for an SUV weighing more than 1.6 tonnes with all-wheel-drive. With 420Nm, by constrast, the turbo petrol feels strong and willing, with a huge difference in low-speed traffic, where the CX-5 turbo surges forward with authority and ease. 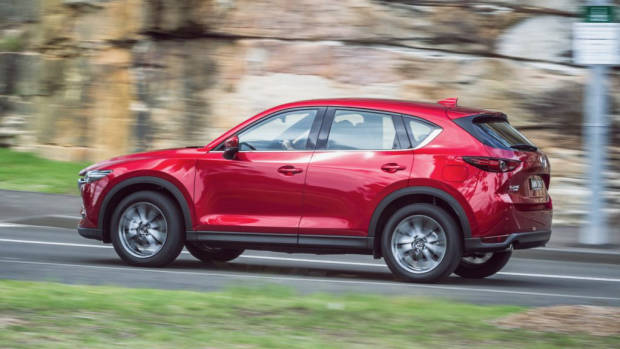 But anybody hoping for a true performance engine here will be disappointed. This engine is quick, but it’s a cruiser, first and foremost. Despite having 8kW/70Nm more than its chief rival, the Tiguan 162TSI, the CX-5 accelerates conservatively, with none of the ferocity of the VW at full bore. The numbers give the story away: the CX-5 2.5T can manage only a 7.7 second 0-100km/h sprint, a substantial 1.2 seconds behind the Vee-Dub. That’s partially down to the fact the Mazda’s torque is delivered at a flat 2,000rpm, while the Tiguan’s two-litre turbo holds peak torque all the way from 1,500rpm to 4,400rpm.

Pin the throttle and there’s no being pinned to the back of the seat. Instead, as we found with the lighter-again Mazda 6 sedan and wagon, Mazda’s 2.5-litre turbo is a linear and laid-back unit. No real matter: this is a good, enjoyable, smooth engine. And there is pace to be found, especially in the low rev range – it’s just not rabid. We’d love to see a CX-5 MPS in future, with the wick turned up. It’s been a long time between drinks for turbo Mazda performance cars. 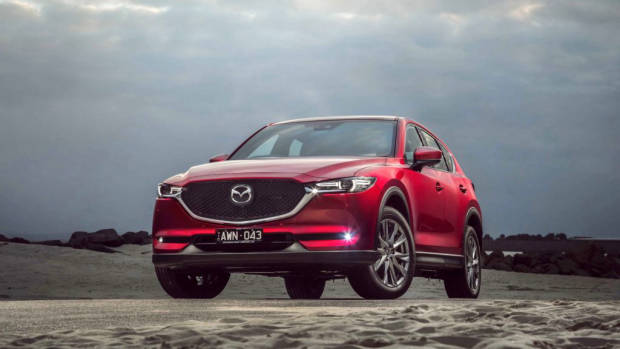 Fuel economy is just about acceptable. In slow traffic, we found that 9L/100km was about as good as it got – the same in spirited back road driving. On the highway, we got the CX-5 turbo to settle down to 7.5L/100km.

So the engine earns a ‘pretty good’ rating – but the CX-5’s handling can only be described as ‘great’.

While it’s no featherweight on paper, Mazda’s midsize SUV feels light as a feather to drive, with a chatty and lively front-end a dainty rear-end that is easily engaged while negotiating a twisting back road. 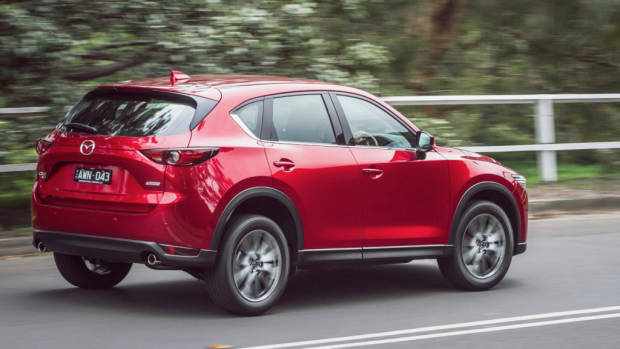 The crisp and quick steering of the atmo 2.5-litre are barely diluted in the turbo, which adds little additional weight over the front axle: certainly, the CX-5 turbo petrol is more willing to turn in than the heavier diesel. There’s body roll, certainly, but it is manageable. You can tell Mazda engineers all spend time in the MX-5: this is no sports car but the CX-5 behaves like one all the same. Trail brake into a tightening-radius corner and the rear axle lightly oversteers, with ESC only intervening if you’re jerky with your inputs.

All-wheel-drive comes standard with all of the CX-5 engines, bar the base two-litre, and AWD really helps the turbo engine along. In the Mazda 6 turbo, which is front-drive, we found the torque would regularly overwhelm the front wheels. Not so in the CX-5, where the system gets ahead of wheelspin. Plant the throttle in a tight bend and you can feel the torque heading southwards, hewing the SUV to the line you’ve picked. 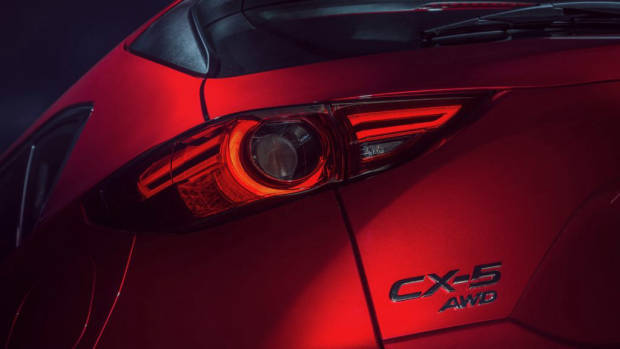 The six-speed auto remains one of the better gearboxes in this segment, well-tuned with proactive downshifting. Sport mode is perhaps a little too keen with the turbo, though, holding gears longer than necessary – almost as if it doesn’t believe it has been endowed with 68% more torque than before.

Keen drivers will find much to discover about the CX-5’s superb dynamics. Despite being a relatively small carmaker, Mazda have a deft touch and the CX-5’s chassis is one of, if not the best, in this class. 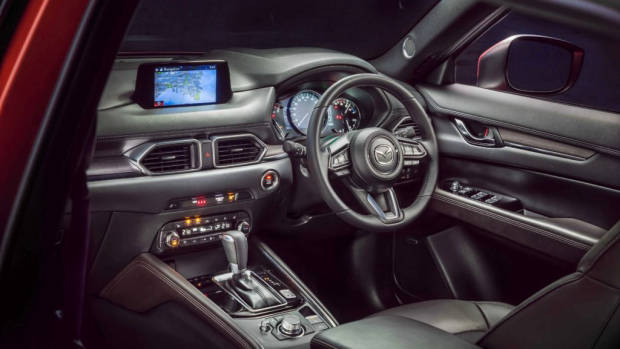 The turbo engine can only be had with the two premium CX-5 grades, which means 19-inch wheels are compulsory. The big hoops – finished in black/silver two-tone on the GT, or platinum grey on the Akera – do spoil the beautiful ride of the lower-end models slightly; they ride on 17s. That said, the 19s still deliver a decently comfortable ride, though it becomes a little busy on poor surfaces. At least there’s very little noise intrusion at any time.

Mazda also took the opportunity to alter some elements of the CX-5’s cabin for this 2019 model year upgrade. All grades now get Apple CarPlay and Android Auto through a (relatively small) seven-inch touchscreen, and all get a different climate control array, but the premiere changes are focussed on the range-topping Akera, which has now been clearly differentiated from the GT inside and out, starting with the platinum wheels mentioned above. 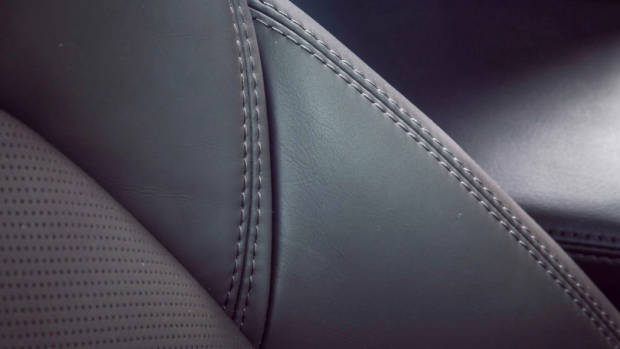 Inside, though, the Akera is raised well above the GT in positioning, earning the luxurious appointments recently seen applied to the range-toppers in the CX-9 (Azami LE) and 6 (Atenza) lineups. That means ‘dark russet’ brown nappa leather for the seats, with ventilation added to the existing heating; real Japanese Sen timber trimming; a larger digital display for the driver, and soft LED ambient lighting abound.

All those changes make the $2,200 leap from the GT to the Akera seem like money particularly well-spent, though if you can’t stretch there, the GT remains a nice place to spend time. There’s a choice of black or pure white leather trim in the GT, plus a sunroof, and many of the soft-touch surfaces are shared with the Akera. 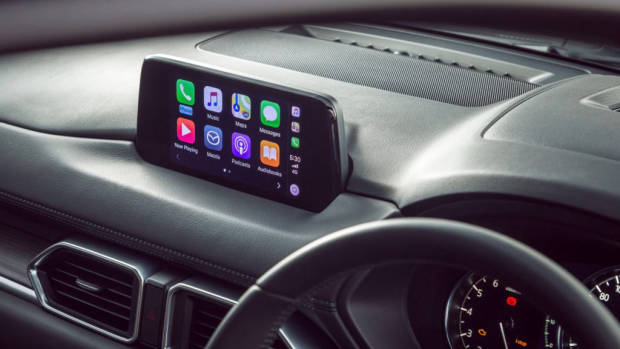 Comfort up front is decent, though the front pews aren’t as shapely or supportive as those in a Tiguan: a three hour drive threw up one or two brief aches. What is great is that wherever you rest your limbs, you’ll find soft materials – the door tops and knee rest are both really plush. The rotary controller for the MZD Connect touchscreen remains well positioned, and it’s a great, safe way to interact with the onboard tech. We did find that the head-up display is not visible through polarised sunglasses.

Room in the back is pretty good, too; legroom isn’t as generous as some in this class, like the long Holden Equinox, but for most, it’ll be fine. Two full size adults will fit back here, enjoying the air vents and two powered USB ports: the car has four in total. 442L of boot space is found behind an electric tailgate. 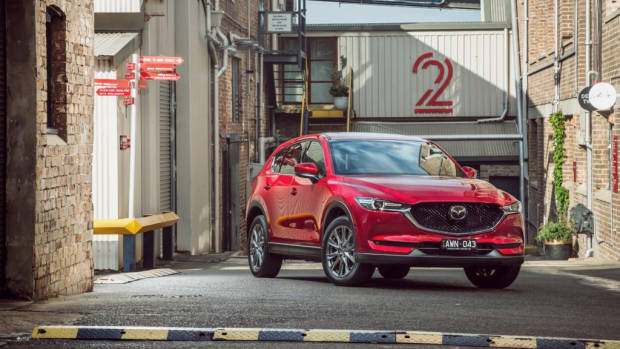 Every CX-5 now gets a full safety suite as standard, much of which was reserved for the Akera until recently. The whole range now sports AEB in forward and reverse, adaptive cruise control, lane keep assist, blind spot monitoring and rear cross-traffic alert, and driver fatigue detection. The Akera keeps a tight hold on just two premium safety features – adaptive LED headlights (the lower models have standard LEDs), and a 360-degree parking camera.

Ownership will be benefitted by the fact that Mazda recently adopted a five year, unlimited kilometre warranty, though the service intervals are still too regular: every 10,000km, which for most people, will be every nine months, not annually, as Mazda suggests. Many rivals have 15,000km gaps. Though it’s not the high-performance SUV some will have been expecting, the CX-5 turbo petrol is a great addition to the Mazda range. Finally, this uber-popular SUV has a competitive, premium petrol option – something we think is likely to add incremental volume next year once word about the new choice breaks out.

If it were our money, we’d still closely look at the CX-5 twin-turbo diesel, which we think remains the best engine in the range. The diesel is substantially more economical but it also feels faster and more urgent. It does cost another $500, though. We recommend test driving both turbo options – petrol and diesel.

But if you’ve been waiting for a turbo petrol CX-5, this really is your car. Refined, quiet and far stronger than the existing petrol options in the Mazda CX-5 lineup, the 2.5T is a good engine, and one that we believe is worth a $2,500 upcharge from the naturally aspirated unit. It only sweetens the deal further that the Akera now feels like a genuine competitor to entry-level luxury SUVs that cost at least $10,000 more. 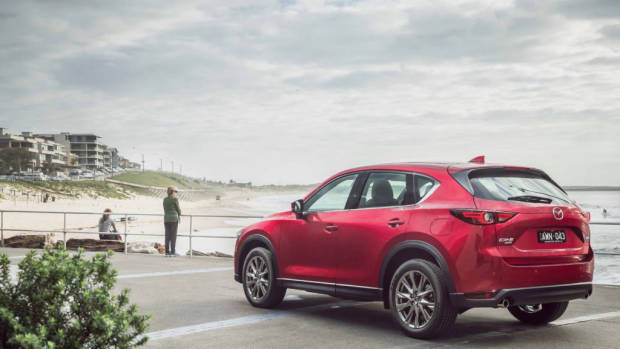