When the new Volkswagen Tiguan launched late last year, the range was largely complete – apart from the top end. It was missing a version that Volkswagen generally does well: a halo performance model – think Golf GTI. Well, as deliveries of new Tiguans with mainstream petrol and diesel engines were underway, Volkswagen were preparing a faster model for Australian buyers – and this is it. The 2017 Volkswagen Tiguan 162TSI pairs the impressive dynamics and great packaging of the existing car to the Golf GTI's willing 162kW two-litre turbo engine.

So what does combining a Tiguan body with a Golf GTI engine create? Well, it's not quite a Tiguan GTI – though it comes close. The Tiguan 162TSI is pretty swift: it'll match the Golf GTI's 6.5 second 0–100km/h time – though it's more refined, quieter, and more comfortable than the Golf. The Tiguan's practical SUV nature is still the overriding characteristic of the car – but the presence of a muscular turbo engine and genuinely impressive handling dynamics mean the 162TSI is actually quite a fun car to drive.

And that's the whole point of this car: to blend a bit of the spirit of the Golf GTI with the stuff we already liked about the new Tiguan – like the class-leading roominess and the high-quality interior. What you end up with is a do-it-all family car. The Tiguan 162TSI will take five people in comfort, it gives you a huge boot, all while being ready to tear up a country road at a moment's notice. In 2017, that's about as relevant as a car gets.

So while we already thought the Tiguan was the medium SUV to have, we think that the 162TSI is the Tiguan you should buy. Motivation for the 162TSI comes from the engine that sits under the bonnet of the Golf GTI hot hatch: Volkswagen's EA888 2.0-litre turbo four-cylinder. Impressively, despite the Tiguan weighing about 300kg more than the Golf, the 162TSI can match the GTI's 0–100km/h sprint of 6.5 seconds. That's because of the trickery of the Tiguan's all-wheel-drive system which helps you achieve clean, skid-free launches.

Like the Golf GTI, the Tiguan accelerates smoothly and smartly. It's quick rather than neck-breaking – but the engine strikes about the right kind of feeling in the SUV. The Tiguan 162TSI will build speed quite rapidly but it won't frighten you (or the family). It's particularly refined because this engine is definitely quieter in the Tiguan than the Golf: except when you're revving it hard, the 162TSI sounds pretty subdued. 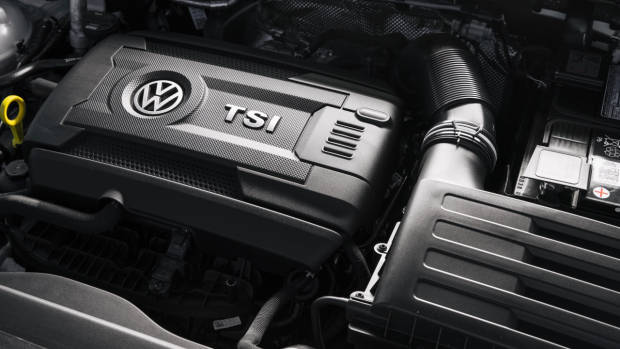 Straight-line performance is impressive, then – but as we knew from the everyday variants, the Tig doesn't lose its composure when you're punting it into a corner. If anything, the all-paw 162TSI gets even better.

There is a small amount of controllable body roll but the Tiguan's natural and relatively quick steering make the car easy to place in the corners – and like Volkswagens tend to do, it just holds and holds when you push it pretty hard through a series of bends. It's a sporty drive, this.

Volkswagen expects 70% of 162TSI buyers to opt for the R-Line package, which swaps in 20-inch Pirelli Scorpion tyres which increase grip levels over the standard Highline's 18-inchers. If you plan on fanging the car, the upgrade is certainly worthwhile.

The R-Line also adds adaptive dampers which can be switched between Comfort, Normal and Sport, and most will leave them in Comfort mode which is only just supple enough. Comfort on the R-Line's large wheels is only equivalent to the fixed dampers on the 18-inch-shoed Highline.

Decent brakes mean the 162TSI hauls up cleanly but you are dealing with a near 1.7-tonne vehicle, so some realism when driving hard is important. 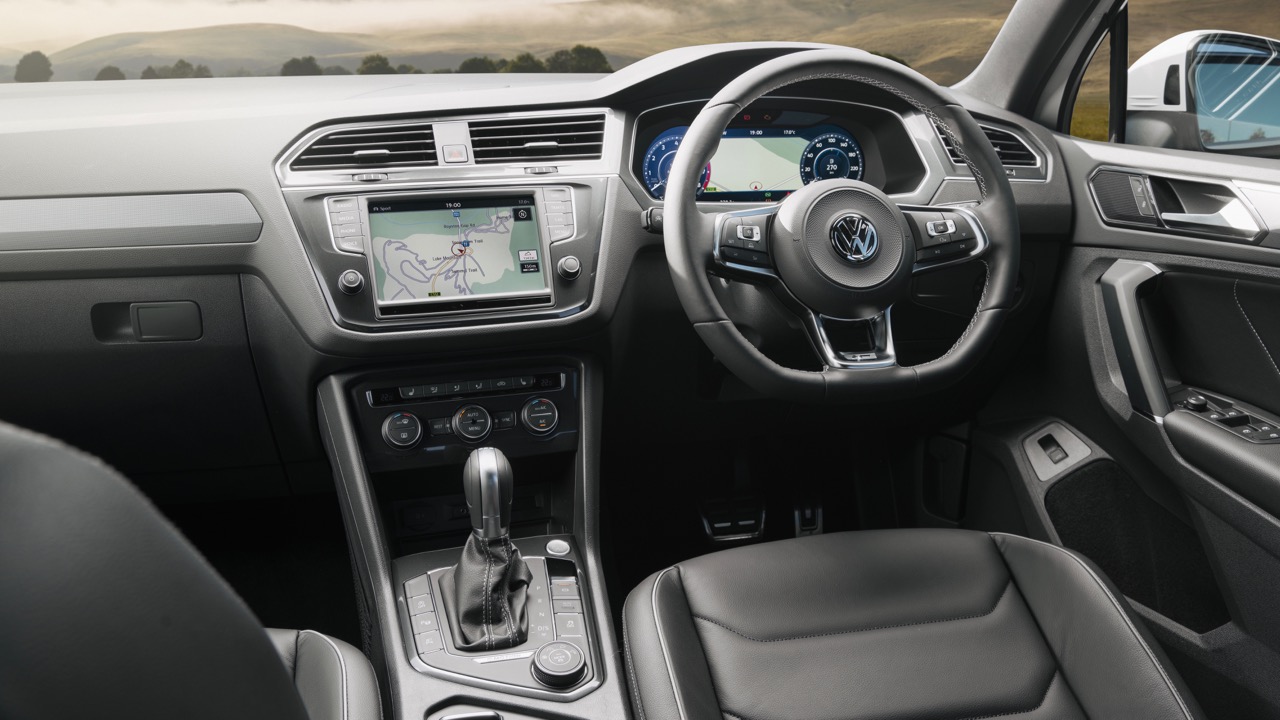 One of the Tiguan's biggest trump cards among the hyper-competitive medium SUV field is its interior: Volkswagen have a real habit of designing comfortable, high-quality cabins and the Tiguan is no exception.

There are no changes inside to the diesel 140TDI Highline model that we drove long distances in last year and put up against the Hyundai Tucson Highlander – but this early into the Tiguan's lifespan, no changes were needed.

Life inside the Tiguan 162TSI is comfortable thanks to well-shaped and supportive heated leather seats. While they do have decent side bolstering, even more aggressive seats would be appreciated during spirited cornering. The Tiguan is capable of that sort of driving, so optional sports seats would be a worthwhile consideration for Volkswagen.

Though a sharp eight-inch touchscreen with CarPlay and Android Auto is standard across the Tiguan range, the real highlight of the cabin tech-wise is the 12-inch digital gauges, called the Active Info Display. The Display puts navigation and a host of other graphics directly in front of the driver. Ideally, this tech would be standard at the top of the range, but at the 162TSI level is remains part of a $2,000 safety pack. That's a box we would tick.

Material quality is, on the whole, excellent. There are soft-touch surfaces aplenty in here, from the cushy armrest to the premium window sills and dash top. However, some harder plastics have crept in on the new Tiguan around where the driver's leg rests. That should be rectified.

It's roomy here, whether you're in the front or the back. Space for back passengers is especially good. The sliding back row means you can maximise legroom for the kids, or boot space – and the second row also reclines quite a bit. Plus, there are air vents and a separate temperature control back there, plus airline style tray tables for those in the back. 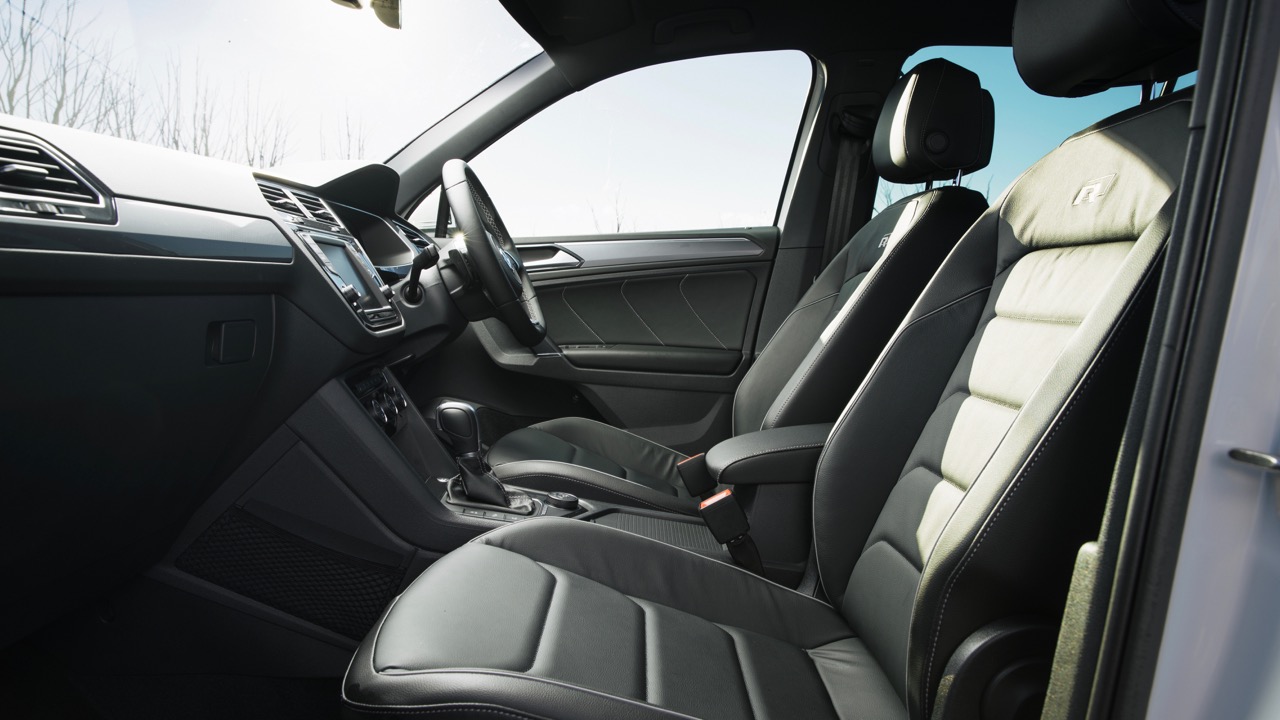 Despite measuring in within a centimetre in every dimension of a Hyundai Tucson, the new Tiguan is a good demonstration of the engineering talent at Volkswagen when it comes to packaging.

Not an inch inside this vehicle has been wasted – space has been maximised for both occupants and cargo, which makes the Tiguan one of the most versatile choices among its SUV competition.

The fact the rear seats can slide backwards and forwards creates the potential for a huge boot when you need it. With the back seats slid forward – and smaller kids will still have enough legroom in this case, though it's tight for adults – the Tiguan's boot expands to 615 litres. That's 25% more than most of competition.

Slide the seats backwards and naturally that room decreases, but not by that much. Plus, the back seats do fold flat to create a long, tall space for lugging a couple of bikes or larger furniture.

The Golf GTI is a practical hatchback but the Tiguan 162TSI takes this to another level, which family buyers will appreciate. We won't be surprised if potential GTI buyers walk across the VW dealership to have a look at the bigger, but still swift, Tiguan – the practicality factor is that appealing.

There are a ton of storage options in the cabin, too – and almost all of them are felt-lined, which VW's competitors just consistently forget about. Door bins, a dash-top box and the central cubby box are all softly lined to stop your clutter from sliding around and vibrating. It's a great feature.

There is a surprisingly large amount of storage in the vehicle's ceiling – though this disappears if you option up a sunroof.

Image from our test of the 2017 Volkswagen Tiguan Highline.

Though the Tiguan 162TSI lists at $48,490, that's a slightly misleading figure. If you want to really love the Tiguan you buy, you do have to tick some key options, and these tend to drive the price well into the fifties. Volkswagen recognise this, telling Chasing Cars that just ten per cent of 162TSI orders have been for a basic, 48 grand vehicle.

Seventy per cent of orders include the R-Line package ($4,000) which make the Tiguan look absolutely awesome. The regular Highline trim is handsome, but not sporty. Upgrading to R-Line brings stunning 20-inch wheels, an aggressive body kit, a nicer steering wheel and various R-badging around and inside the car. 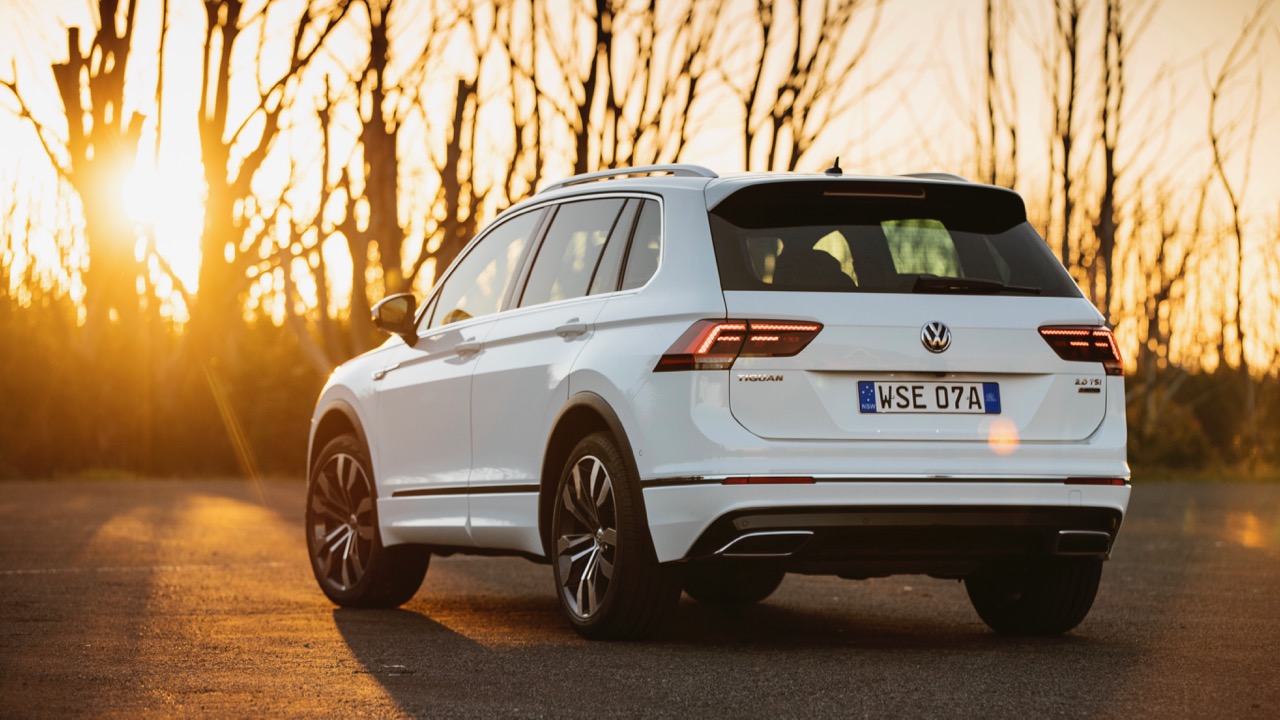 That's quite a lot more than a $44,990 Ford Escape Titanium with 178kW – though the Ford accelerates substantially slower. It's also a more than the $45,450 Hyundai Tucson Highlander – which, again, isn't really performance-oriented.

We'd also argue the Tiguan is half-a-class above those vehicles in terms of refinement and luxury. It's built in Germany, it looks and feels more premium than its competitors and it goes like a hot hatch.

Volkswagen would have us believe the Tiguan 162TSI is, instead, a value-laden equivalent to the German luxury brands – a cheaper but gruntier and more modern alternative to, say, a BMW X3 20i ($62,200).

Certainly, fully kitted out, the Tiguan can take the fight to that level, and it'll be interesting to see how many sales VW can bleed off entry-level luxury buyers with a Tiguan R-Line. 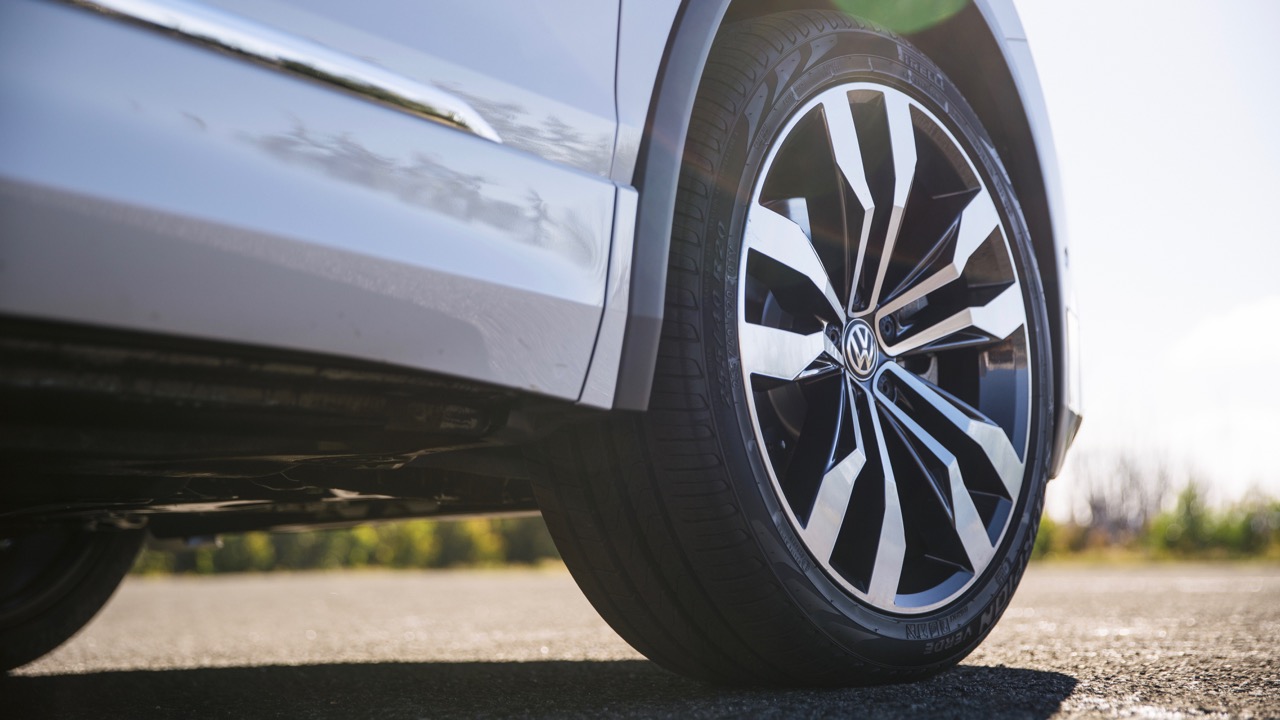 We think Volkswagens sit about half-way between mainstream brands and luxury brands. That makes most Volkswagens a good, premium midpoint between value-driven competitors and more expensive luxury cars.

That's especially true of the Tiguan and the Golf, which end up 10-20% more expensive than an equivalent Toyota, Hyundai, or Ford, but 10-20% less expensive than a model from a German luxury marque.

The fact that a well-specified Tiguan 162TSI sits in the mid-$50k range is no accident: it places this car between a high-end Hyundai Tucson, and a low-end BMW X3 or Mercedes-Benz GLC. That feels entirely right to us but it makes for an interesting shopping experience.

Worthwhile competitors on the less expensive end of the scale include the Hyundai Tucson Highlander 1.6T, the Ford Escape Titanium EcoBoost, and the forthcoming second-generation Mazda CX-5 2.5.

However, if you're shopping for a luxury badge – say, a Audi Q5, BMW X3, Land Rover Discovery Sport or Mercedes-Benz GLC-Class you will find much to like about the Tiguan. For the price of a top-of-the-range VW you'll only be getting into a very base model luxury SUV.

Shop carefully because there is plenty of competition in this segment – which is great for buyers.