I grew up at a time when Honda made cool cars. There was the exotic NSX, but even mum and dad’s Civics were special – a cut above other Japanese imports. Honda in the nineties was premium, stylish, and aspirational. Mazda studied Honda’s game closely and eventually stole it – leaving Honda’s range of increasingly sensible models behind. But a decade and a half on, the winds of change are blowing, and we’re taking notice. First came this year’s revived NSX, taking to the streets with an electric supercar powertrain. So imagine our delight when the other end of the range – the 2017 Honda HR-V – arrived at our offices looking great, and driving so well you’d swear the Honda of the nineties had never left.

With tight, angular proportions, the HR-V is one of the more attractive small SUVs. It has a comfortable and spacious interior, with particularly good seats, but outdated infotainment lags behind rivals. The Honda is practical; the roomy back seat folds flat or upwards. The boot is 66% larger than the Mazda’s. The stereo is good. A reversing camera is standard.

All models get a 1.8-litre engine which is smooth and frugal in town, but feels stressed when pushed hard. That’s a shame, because the handling is quite sporty. All-wheel-drive is not available; the HR-V is front-wheel-drive only. Services are cheap, and Hondas are reliable. Compared to rivals, the Honda represents good value and depreciation is acceptable.

Most people will be fine with the midrange $27,990 VTi-S. The $33,340 VTi-L adds leather, a sunroof, climate control, and parking sensors. Autonomous safety features are an extra $1,000, paired only with the VTi-L.

Watch our Honda HR-V video review by clicking the image above.

There’s just one engine available in the HR-V – a naturally aspirated 1.8-litre petrol making 105kW of power and 172Nm of torque.

Those outputs are best described as sufficient rather than generous – but the Honda feels relaxed and smooth around town. The HR-V is closely pegged to equivalent rivals – the Mazda CX-3 uses a 109kW two-litre and the Mitsubishi ASX makes 110kW.

The Honda can’t match the Mazda’s pace or punch, though, because the HR-V is nearly 200kg heavier. In reality, that weight isn’t much of a problem – the HR-V feels planted, settled and solid.

But the extra pork does make itself known when you push the Honda – for example, when merging onto a fast-moving road or when overtaking the 1.8-litre becomes thrashy. Both the Mazda and Mitsubishi offer an optional torquey diesels – which makes them better open-road cruisers.

But really, these cars are not designed for regular highway travel. They will spend the majority of their lives driving to work, school, or running errands in the ‘burbs. That is the HR-V’s bread and butter, and it excels here.

At city speeds the Honda’s CVT automatic is also fine – these gearboxes cop plenty of flak but we found it to be responsive and slick when kept away from the highway.

It would be a treat if Honda made the new Civic’s 1.5-litre turbo an option – because the Honda is a keen and sporty handler on a backroad.

The steering has a slightly heavy weighting that feels very natural, and like great Hondas of old, the HR-V keeps its composure when cornering enthusiastically.

Everything loosens up in town, including the steering, making the Honda a doddle to manoeuvre. The substantial glasshouse helps, too – visibility is not a problem in the HR-V.

The suspension and damping has been done well – another hallmark of nineties Hondas. Most bumps and imperfections disappeared under the HR-V without fuss, though it can be confounded by repeated sharp edges.

Even on the larger 17-inch wheels the ride quality is better than most – and the Honda is nice and quiet inside. Braking performance was unremarkable, with a normal amount of effort required through the pedal.

All cars come with six airbags and from the mid-spec VTi-S up they are fitted with Honda’s LaneWatch blind spot camera. This works manually, or whenever the left blinker is activated, streaming a feed of the left blind spot to the touchscreen. I think it works well – but Honda have said they will shift to conventional blind spot sensing in future.

Only the VTi-L is fitted with autonomous emergency braking and other autonomous safety features are only available optionally on this top-spec model.

Getting into the HR-V, each member of the Chasing Cars team had the same reaction – Honda is back.

It’s spacious and light inside the HR-V, and the premium feel punches towards Volkswagen levels of refinement.

Visually, it’s not as exciting as the Mazda, but the build quality and the feel of the materials is superior in the Honda.

The seats are great – the cloth seats in the VTi and VTi-S are comfortable, but the leather pews in the VTi-L are worth the upgrade. The quality of the leather is surprisingly high and they have even better adjustment.

The HR-V’s driving position is good – a great compromise between visibility and a sense of ride height.

Space in the back is class-leading – there is more than enough headroom and legroom for two adults, and three smaller kids will find it liveable – but it would be better if rear air vents were included.

Materials used throughout are impressive – the leather steering wheel and gear shifter feels nice underhand. Secondary elements like the dashboard trim and door inserts are plush – most rivals get hard plastic.

Drive a bit further though and you see that Honda needs to update its technology. The inclusion of a touchscreen across the range is good – but the software on the screen is dated and even the top model misses satellite navigation.

That wouldn’t be an issue if the HR-V had Apple CarPlay and Android Auto, but it doesn’t. This is likely to be added to the range in future.

Connecting a phone for music with Bluetooth was easy, but our test car wouldn’t show track names. That said, the HR-V’s six-speaker stereo sounds great.

Many small SUVs look more spacious than they actually are – but the Honda is the opposite. The sleek and angular lines disguise the fact that the HR-V is the most practical – and, thus, sensible – option in its class.

Drop those rear seats and 437 litres becomes 1,462 litres – heaps of space for long items. Two bicycles will fit with a wheel removed.

Space is one thing but the HR-V’s practicality party trick is the Magic Seats – the rear bench doesn’t just fold, but also flips up on itself, creating a tall space behind the front seats. Think bookshelves or tall plants. 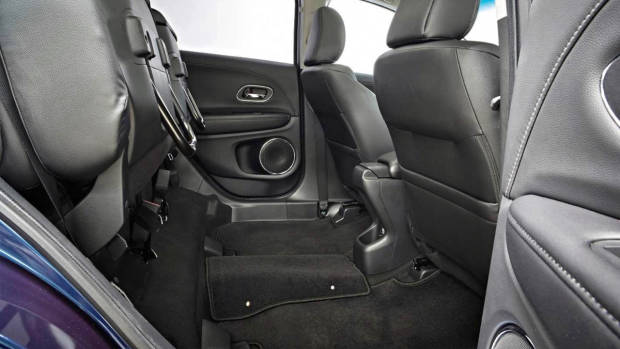 Storage space within the cabin is fine but not plentiful. There’s a customisable space ahead of the central armrest, with a movable floor and flip-out bottle holders. The door bins can fit a litre bottle but they’re not huge – nor are they felt-lined, so stuff scratches around.

In the back, the door bins are small, and there’s just one normal cupholder – the tiny flip-down armrest doesn’t have have any dinky storage within it.

All HR-V models have a large, sharp standard reversing camera, making for safer backing up. 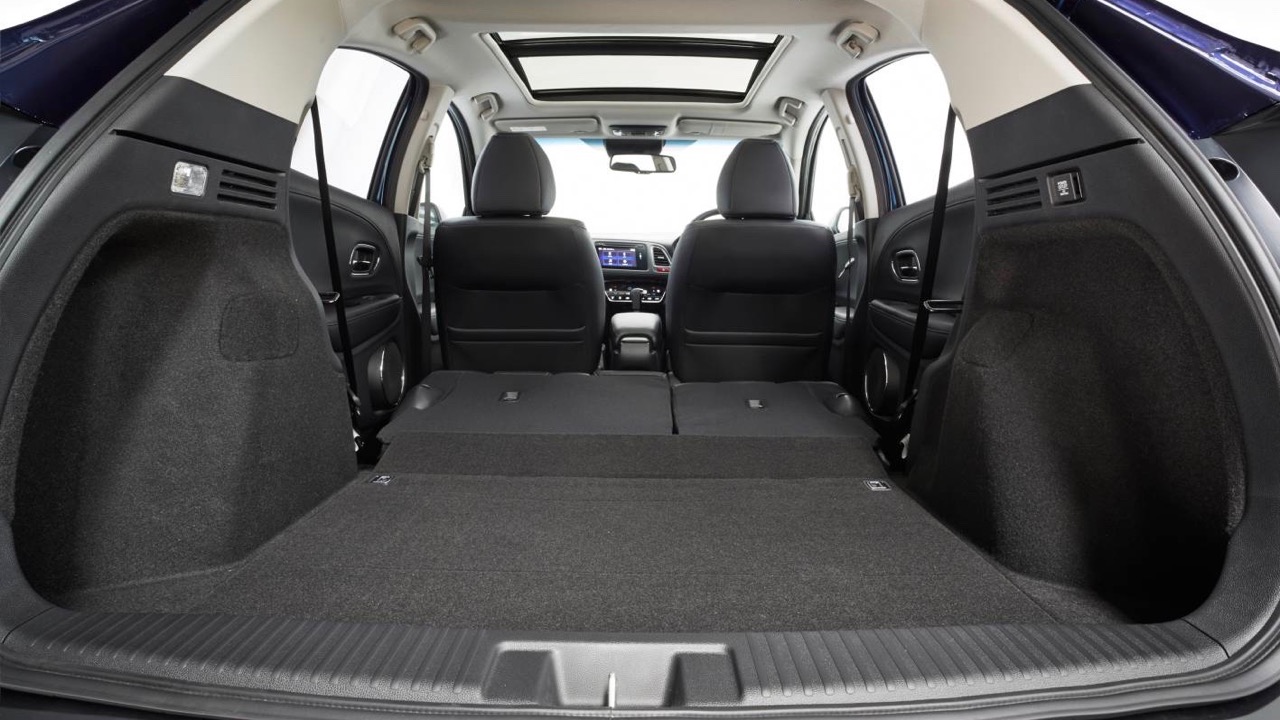 Honda comes up around the middle of the JD Power quality survey, which assesses quality in Honda’s biggest market – the United States.

There are few reliability concerns about Honda here in Australia, and in our experience, Hondas tend to keep going and going.

Honda builds the HR-V in a variety of places but Australian stock is sourced from the company’s Thailand plant – and Honda claims Thai quality is equal to or better than that from the British plant in Swindon.

The HR-V is attractive as an ownership proposition. The capped price servicing programme is sensitive to inflation but the predicted prices are low. The first three years of servicing comes to $880 – 20% less than the Mazda, but dearer than the Mitsubishi.

But the annual service interval is distorted by a too-low limit of 10,000km between services. The average Australian car owner drives 14,000km per year. Mazda’s intervals are the same; Mitsubishi’s 12 months or 15,000km programme is smart.

The Honda is middle-of-the-road on the everyday running cost – fuel. At least the reality is close to the claim – Honda says 6.9L/100km in mixed driving – we got 8L/100km.

Predicted HR-V depreciation is better than most rivals. After three years and 42,000km—the average—Glass’s Guide indicates that the HR-V VTi-L will retain 55.8% of its value. That’s much better than the Mitsubishi ASX XLS at 49.6%, but the Mazda comes out best at 58.0%

Splash out on the $33,340 VTi-L and you’ll get our car’s comfortable leather seats, a panoramic sunroof, dual-zone climate control, and parking sensors front and rear.

Each of the models offers a comforting sense of value for money.

Aside from $575 for metallic paint there’s just one option – and that’s an autonomous safety pack for the VTi-L called ADAS. It’s $1,000 and bundles forward collision warning, lane departure warning, and automatic high beam.

Those safety features should be standard on the VTi-L and optional on the other models.

Our Honda HR-V recommendation: which HR-V should I buy?

Having experienced the VTi-L’s comfortable seats and particularly upscale cabin, it would be hard for us to avoid dropping the extra cash on this model.

But $33,000 is too much for only average technology – so without Apple CarPlay included, our recommendation goes to the mid-spec $27,990 VTi-S, which balances an attractive price point with many of the HR-V’s virtues.

We’ve touched on two of the HR-V’s competitors here for perspective, but actually there are about twelve other options. That’s a lot of choice.

Already mentioned are the Mazda CX-3 and Mitsubishi ASX, which outrank the HR-V in sales.

Also particularly worthy of consideration are the French options, which have plenty of character – the Citroen C4 Cactus, Peugeot 2008 and Renault Captur – plus the funky new Suzuki Vitara.