The last few generations haven’t been memorable, but with the 2016 Honda Civic, the Japanese brand have struck a winner.

That’s the case visually, at least – the Civic is the most striking car among the crop of small cars.

Most people shopping for a small car end up buying a Mazda 3, Toyota Corolla, or Hyundai i30. Should they buying a Civic instead?

That question depends on how much you’ve got to spend, because there is a marked difference in the technology between the low and high ends of the range.

For our first, early look at the Civic we borrowed the $22,390 VTi base model, which keeps the 1.8-litre petrol from the old generation.

While the value is unquestionably very sharp – and there are many good things to mention, including the excellent interior and low ownership costs – that engine is getting on.

But if you can step up to the $27,790 VTi-L model – or anything higher than that – you’ll get Honda’s new 1.5-litre turbo petrol engine, which is significantly better.

That’s only really relevant if you like driving, though, and as a runabout, there’s little to fault about the package offered by the base model.

It’s comfortable inside, offers technology like Apple CarPlay, and is quiet and easy to drive – exactly what most people want.

And there’s the fact that, at long last, it looks great. The Honda Civic is interesting and different, which is what the small car segment really needed. 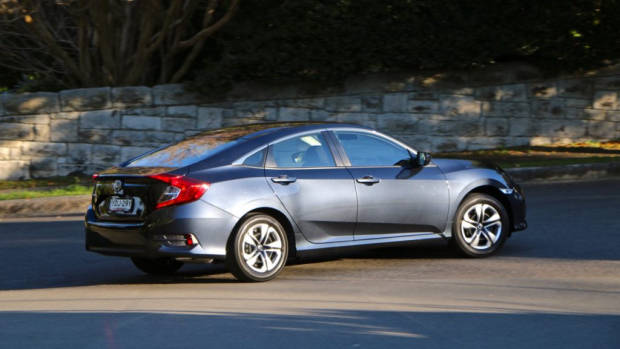 Thanks to our friends at Collins Honda in Sydney's Rockdale for lending us the Civic.

The two engines offered in the Civic range have quite a few differences.

The basic 1.8-litre four-cylinder is fitted to the two lower-end models. With 106kW of power and 174Nm of torque on tap, it’s adequate rather than generous – though the CVT automatic manages the power well and it feels nippy in town.

On the highway or on longer hills, though, you want for a bit more oomph.

That’s where the 1.5-litre turbo comes into play – if you like your small car peppy, the turbo brings power up to 127kW and torque to a much stronger 220Nm.

That’s where our money would go, but we like driving hard, and the $5,000 turbo upgrade will only make sense to some people.

Both have about the same fuel economy, around 7L/100km in the real world.

In either case, the only transmission is a CVT. It’s one of the better CVTs out there, without the elastic whine you hear in a Toyota Corolla, but it’s no match for the Mazda’s conventional auto. 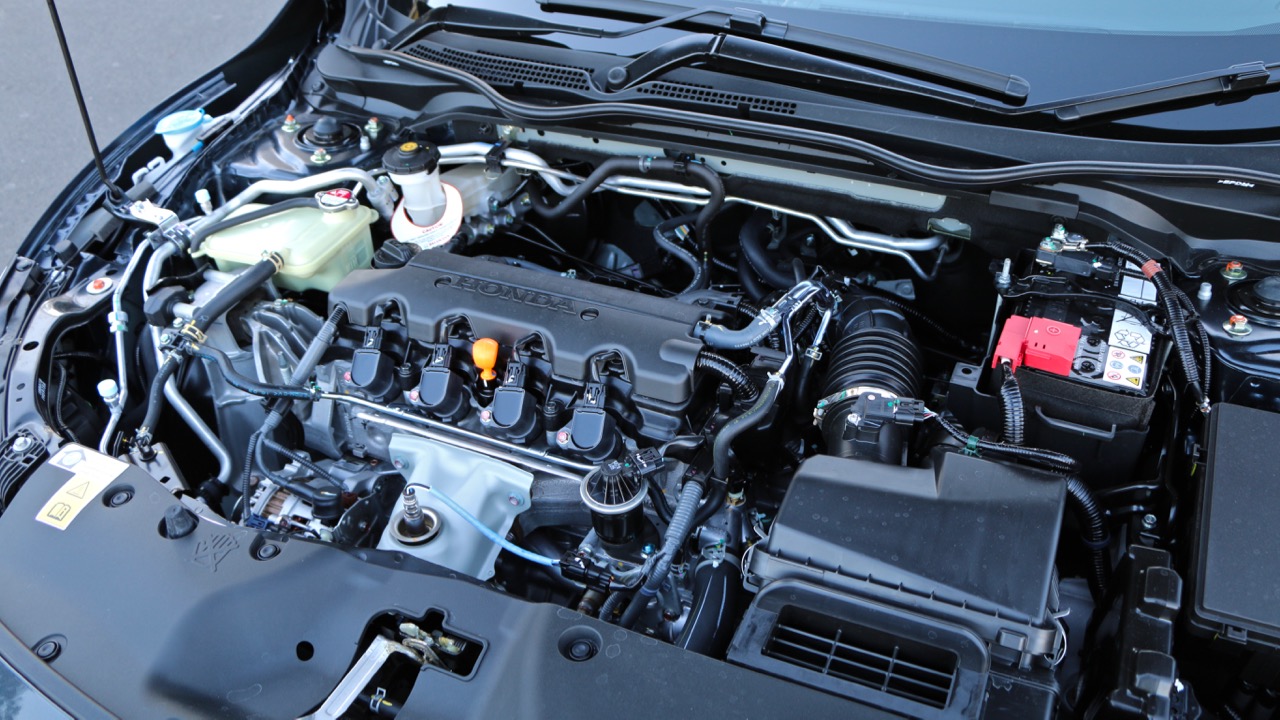 It’s a shame that the manual is gone because with either the high-revving 1.8 or the torquey 1.5, the Civic would be more fun with a stick.

I say more fun, because the Civic is genuinely fun from a handling point of view.

First, you sit lower in the Honda than in rivals, so it feels like a sports car from behind the small steering wheel.

The steering is direct and crisp and the Civic feels like it wants to be driven. Maybe some of the recent NSX engineering effort rubbed off on the Civic team, because I… like the way it drives.

I wasn’t expecting that and so the Civic was a pleasant little surprise for my weekend.

The ride quality errs on the side of comfort rather than stiffness, so there’s a bit of manageable body roll.

However, it is very quiet – at least when the engine isn’t working hard – so the Civic was a relaxing car to punt around. This time around, the Civic’s interior designers knew when to put their pens down.

The old model had a fussy, double-decker dashboard that looked too futuristic but didn’t really appeal to Australian tastes, which tend to prefer classy, pared-back cabins.

Honda realised that and the new Civic’s tasteful and functional interior takes a step up in both appearance and quality. There are plenty of soft surfaces.

Every model gets a high-resolution touchscreen in the centre stack. Honda’s own infotainment software is pretty bad but Apple CarPlay and Android Auto are both standard – so plugging in a smartphone solves that problem.

I used CarPlay all weekend with the car and it works really well.

As I mentioned when talking about how well the Civic drives, the seating position is low. That works well, providing good visibility and making the Civic feel sportier, although the pedals should be pushed toward the front for an even better driving position.

The fabric seats of the VTi were plush and comfortable – but more side bolstering would make them even better. Higher models bring leather.

A small steering wheel looks and feels good and the urethane material on the VTi manages not to look cheap, though the leather fittings of more expensive models is preferable.

Behind the wheel is another high-res digital display providing a numerical speedo and the ability to display music or trip computer information. Once you’ve mastered the functions, it makes sense and looks good.

The Civic has grown longer for this generation – it’s almost Accord Euro length – and as such, there is a lot of legroom for back seat passengers.

Headroom back there is a bit restricted by the coupe-esque roofline, but anybody below six foot will have little to complain about. 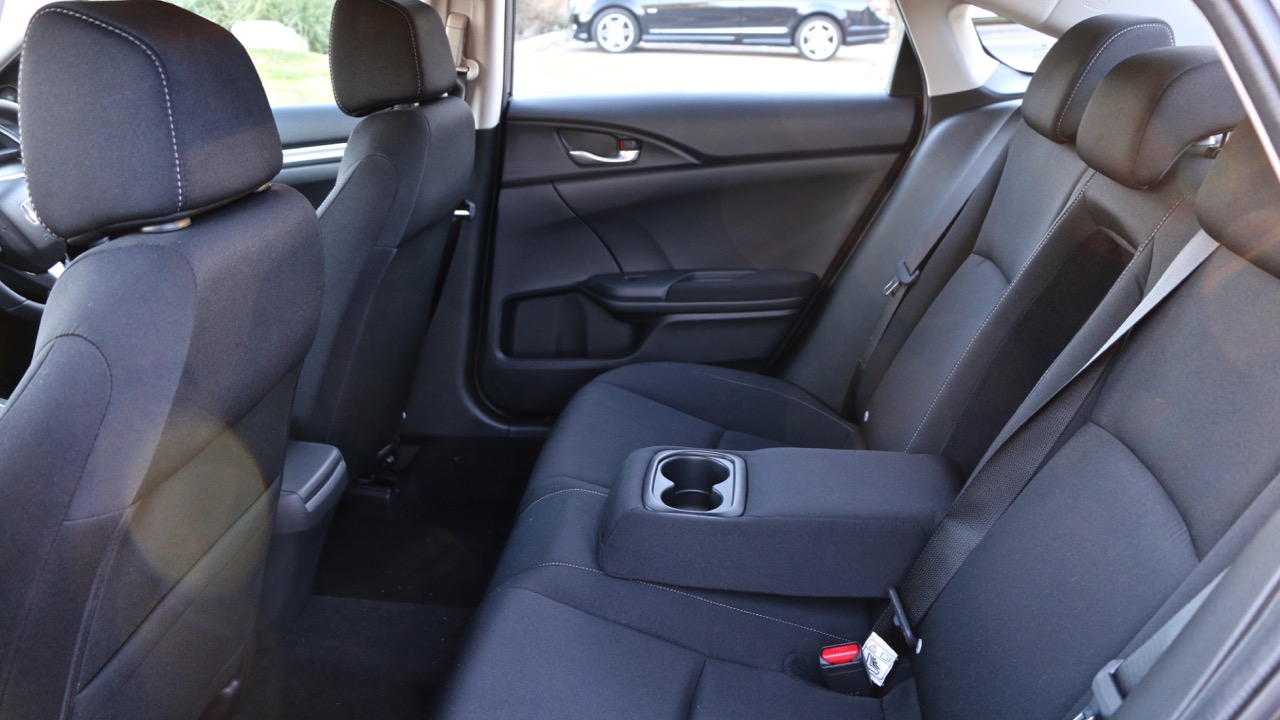 Making the Civic a bigger car has resulted in real practicality gains here. The Civic’s boot is the biggest in class.

Despite the fastback body, the Civic is actually a classed as a sedan and the boot opens in the conventional sedan manner – so the opening isn’t as large as a hatch.

A proper Civic hatch is coming next year.

Making the Civic larger than most of its rivals has been a boon for boot space. The Civic’s 519 litres compares very favourably with the Mazda 3 sedan’s 408 litres, or the Hyundai Elantra’s 458 litres.

There are also handy pull tabs in the boot for dropping the rear seats quickly for extra space.

Enlarging the car has also made back seat room very impressive, with acres of legroom even for six footers, and tolerable headroom.

Unfortunately for your passengers in the back, the Civic doesn’t come with rear-seat air vents or a USB port.

There are plenty of charge points up front, though. One is dedicated to the smartphone link for CarPlay or Android Auto, while another two are available in the central bin.

Storage space up front is good, with a hidden area behind the centre stack, and door bins that can hold big water bottles.

Storage space in the cabin is adequate with door bins up front that can accommodate big water bottles. There’s also a decent-size central bin.

Not that you would, but the Civic can tow 800kg of braked trailer, or 500kg unbraked.

All Civic models have a large, sharp standard reversing camera, making for safer backing up. 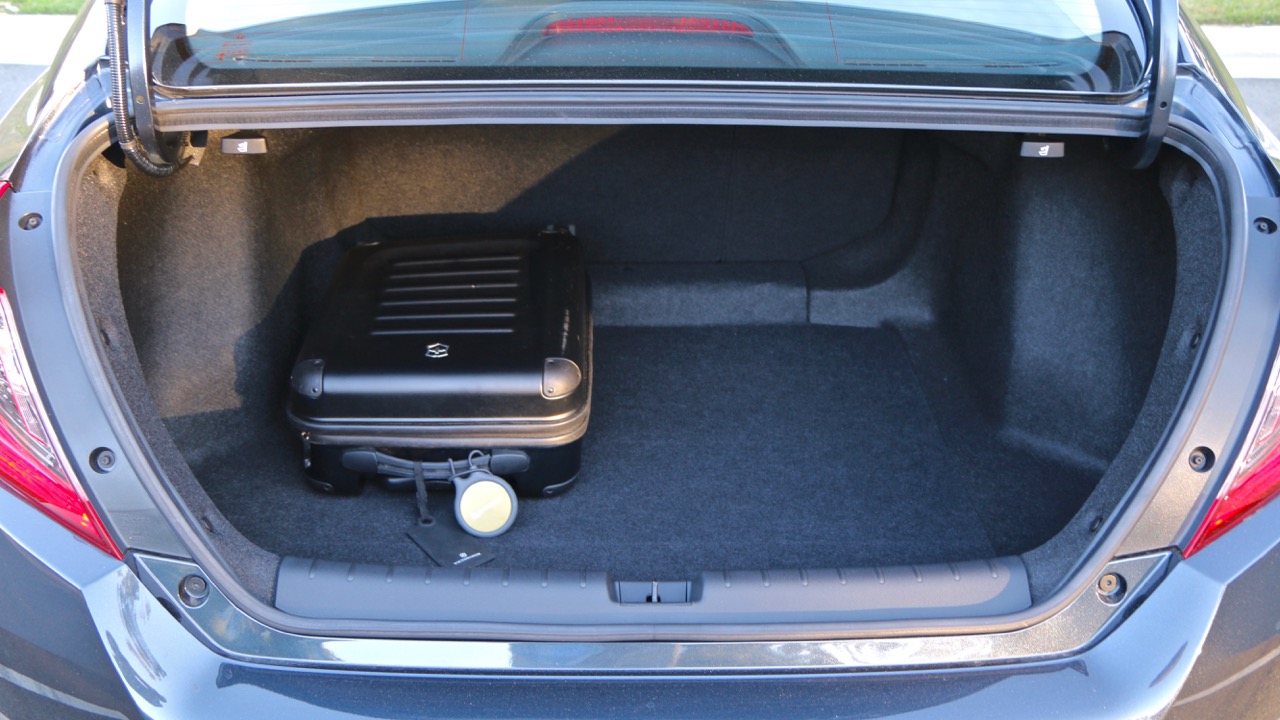 Honda has a particularly solid reputation for quality, and it would be unusual if the tenth-generation Civic wavered from that.

The car is too new to make firm judgments of reliability, but Honda’s range-wide ‘better than most’ JD Power rating is reassuring.

The American ratings company have assessed initial quality of the Civic, rating it 4.5 out of a possible 5.

All Civics that come to Australia are built by Honda’s operation in Thailand, though quality at the Thai plant appears to be high and our Civic felt well built, with no discernible rattles, squeaks. Our car’s gaps were tight and the doors were solid.

Impressively, the servicing costs don’t differ much between the straightforward old 1.8-litre and the more complex new 1.5-litre turbo.

Servicing intervals are yearly or every 10,000 kilometres, with the first three years setting you back $843 for the turbo or $852 for the 1.8-litre.

The other major running cost is fuel. Both engines offer similar economy – 6.4L/100km for the aspirated four and 6L/100km for the turbo. On average, the 1.8-litre should cost about $1,168 to fill up each year, at 2015 average petrol prices.

Honda’s warranty programme is only average for the class. The Civic is covered under a 3 year, 100,000 kilometre programme – easily bested by the Hyundai Elantra’s five year, unlimited kilometre plan.

Predicted Civic depreciation is much better than most rivals. After three years and 42,000km—the average—Glass’s Guide indicates that the Civic VTi will retain about 60% of its value. That’s notably better than the Toyota Corolla Ascent’s 52% and Hyundai Elantra Active’s 53%. There are five models in the Civic range, and the value for money really depends on which trim level you go for.

The VTi base model ($22,390) offers really clear value for money, packing all those solid driving dynamics with Apple CarPlay and Android Auto inside. The steel wheels are a bit daggy, though.

That’s why we recommend stepping up to the $27,790 VTi-L turbo, which adds 17-inch alloys, DAB digital radio, and dual-zone climate control, plus push-button start.

Our friends at Sydney’s Collins Honda are doing the best trade in the sporty-looking RS model ($31,790), which adds no power but looks slick and switches cloth for leather.

A $33,590 VTi-L model completes the range with luxurious features like a sunroof and advanced safety technology.

The sole option is premium metallic or pearl paint ($575), and the new Civic looks best in Brilliant Sporty Blue – our car’s Modern Steel grey tended to play down the sharp angles.

It is unfortunate that the VTi-L’s advanced safety tech isn’t available optionally on lower models. Even the $22,990 Skoda Octavia Ambition includes this stuff as standard, and it’s no longer acceptable that only the flagship car can be had with these life-saving features.

While the Honda Civic is technically a sedan, it looks like a coupe-hatchback blend and that means it has a few more rivals than it otherwise might.

There are many small-to-medium sized competitors, but there are nine others worth considering if you like the Civic.

Test driving at least a few from the list below will help you to work out which car will be the best fit for your lifestyle.

In particular, the Mazda 3 and Volkswagen Golf are must-drive options, as these two remain the benchmark in this class. However, the new Civic really isn’t that far off. 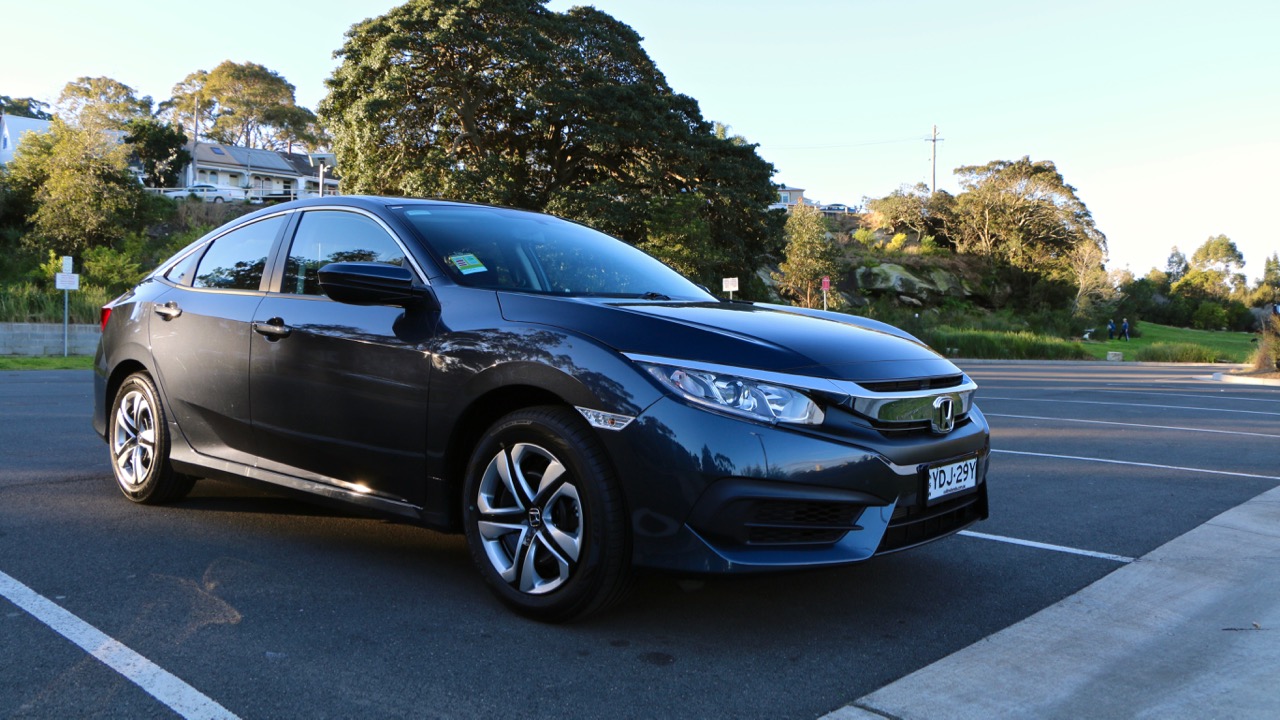