Combining wagon proportions with a modest suspension lift, the V60 Cross Country is beautifully-finished and handsome – but it would be even better with an electric powertrain

Following in the footsteps of Subaru’s Outback, this lifted wagon proved to be a solid sales hit for Volvo and has remained part of the family ever since.

Fast forward to 2022 and the Australian market is now dominated by SUVs, yet there’s still room in people’s hearts (certainly ours) for something a little different.

Certainly that’s the case for Volvo Australia, which now sells the updated 2022 V60 wagon in Cross Country form only, after the regular V60 and wagon and larger V90 Cross Country were discontinued last year. The engine range has been rationalised too, with Volvo now only offering the ‘B5’ powertrain, which is an update of the ‘T5’ 2.0-litre turbo petrol four-cylinder with a 48-volt mild-hybrid system.

To this tester’s eyes though, the V60 is the best-looking raised wagon of the bunch. Its design is all about restraint, with no single headline-grabbing detail. With handsome proportions, subtly flared rear haunches and just enough cladding, it’s hard to think of how Volvo could possibly improve the V60 Cross Country’s elegant yet tough appearance, though you can tailor it to your taste with 10 paint colours including Denim blue and Pine grey available at no extra cost.

How does the V60 Cross Country drive?

Amplifying the look of the V60 in Cross Country guise is a significant 75mm suspension lift over the regular car, increasing ground clearance to 203mm – for reference, that’s 2mm more than a Volkswagen Tiguan and 22mm more than a Kia Sportage, though 10mm less than a Subaru Outback.

That extra height is achieved via longer springs and unique dampers fitted to the V60 Cross Country, though to minimise body roll on country roads, the set-up is quite firm. In practice, that means the V60 Cross Country can feel a little stiff-legged over the concrete expansion joints and speed humps that litter Sydney’s Inner West roads.

This firmer-than-expected spring and damper package combined with the V60’s double-wishbone front, multi-link rear suspension and 235/40R19 Continental Premium Contact tyres gives the Cross Country a sure-footed stance on the road. We didn’t test it extensively on gravel, but the traction afforded by the AWD system was appreciated on a short dirt stint. That said, while the Cross Country inspires confidence on testing country roads, it ultimately doesn’t match the Audi A4 Allroad for outright athleticism.

One of the more premium aspects of the V60 Cross Country is its refinement. This is a quiet wagon, with no detectable suspension thump and fantastic NVH insulation, it’s the sort of car that allows you to really relax on an extended drive.

The V60’s refinement is so good that when you do hear the 183kW/350Nm 2.0-litre turbo-petrol four-cylinder engine with its 48-volt mild-hybrid system under hard acceleration, some of that serenity is lost. While EV technology isn’t here quite yet for Volvo’s mid-sizer, when the next-generation V60 scores electric propulsion it’ll feel just right.

That’s not to say the modular 1969cc four-cylinder is a bad engine – far from it. Volvo claims it will hit 0-100km/h 6.5 seconds (though in practice we couldn’t beat 8.0 seconds) which feels brisk enough for an 1803kg wagon. And when rolling up to a set of traffic lights, the combustion engine turns off seamlessly, leaving the 48-volt electrics to power ancillaries allowing you to listen to the incredible stereo in peace and quiet.

The Aisin-sourced eight-speed automatic transmission feels slicker in the V60 Cross Country than in other vehicles, though its slightly odd left-right manual shift pattern, and the need to double-tap the lever to shift from park to drive requires slight mental recalibration.

Safety is an area where Volvo has typically excelled and the V60 range scored five stars in 2019 ANCAP testing. Features like lane-keep assist, blind-spot monitoring, rear-cross traffic alert and adaptive cruise control bolster safety. The front AEB can detect pedestrians, cyclists and ‘large animals’, though the V60 doesn’t have reverse or junction AEB.

How is the V60 Cross Country’s interior?

Our test car features some options that are must-haves if you want to amplify the best characteristics of the V60 Cross Country. They do bring the as-tested price up from $64,900 to $71,683 before on-road costs, though we reckon that’s money well-spent.

The Lifestyle pack ($4385) bundles rear privacy glass and a panoramic sunroof with one of two optional stereos (yes, that’s right, the V60 offers more sound system options than engine choice!). Our test car was fitted with the more expensive of the pair, the Bowers & Wilkins system.

Considering the Volvo’s attainable price, its 650-watt 14-speaker Bowers & Wilkins stereo is incredible, with enough bass to rattle your ribcage without sacrificing clarity or its soothing warm tone. There are gimmicky settings such as Jazz Club and Gotheberg concert hall, but listening to Daft Punk’s Veridis Quo in Private Concert mode bordered on a spiritual experience.

The other big-ticket option showcased by our test car was perforated Nappa-leather-appointed 16-way electrically adjustable front seats with adjustable under-thigh support. Featuring both heating and cooling, they have a more relaxed fit than the tighter seats found in a BMW 3 Series Touring. All up, they’re easily worth the $2308 extra, and if you want even more opulence there’s also a massage function for $808.

With that plush upholstery and audio-system bling, the V60 Cross Country is very well presented indeed. You have the option of black leather as-tested, or blonde leather as a no-cost option if your lifestyle isn’t so outdoor-focused. The ‘Drift Wood’ inlays on the dash and sliding cubby covers add a touch of interest to the minimal interior aesthetic.

It’s clear Volvo hasn’t spared expense on making sure quality materials are used. The V60 Cross Country’s entire door cards are made of soft-mould plastic, as is under the dashboard, and the carpet on the transmission tunnel is lovely and soft – making this car feel classy.

While the 9.0-inch touchscreen is novel in its portrait orientation, it only has provisions for wired Apple CarPlay and Android Auto, despite featuring a wireless charging pad. There is an on-board Spotify app, though to access it you swipe across to a screen that looks positively Windows XP in its interface, and stands out against the slick main menu.

The HVAC controls are found in the touchscreen too, though being ever-present on-screen it doesn’t take long to figure out how to set the temp just right. Volvo’s automatic climate-control is one of the best at regulating temperatures, too.

One aspect of the V60 Cross Country’s technology package that could be pushed further is the digital driver’s display. It’s on-par with BMW’s (though the high-contrast navigation is easier to see), but Audi, Jaguar and Mercedes-Benz all boast more interactivity and customisability for the digital dials.

The V60 Cross Country’s back seat is hugely comfortable thanks to a relaxed backrest and decent under-thigh support. There’s also enough knee and headroom for someone up to 188cm even with the sunroof fitted. Less great is the large transmission tunnel, which means the V60 can’t seat five in comfort.

Volvo is known for its useful boots, and the V60 Cross Country’s 529-litre space is big enough to fit 44 Chasing Cars soccer balls, though it only has a space-saver spare beneath the floor. There’s also a handy pop-up boot divider that holds shopping bags in place, a 12-volt socket and plenty of space for a road bike with both wheels on.

What are the V60 Cross Country’s running costs?

Though the mild-hybrid system equipped on this Volvo ‘B5’ engine promises to lower fuel economy, it isn’t transformative. In our real-world testing the V60 Cross Country returned 9.0L/100km.

The V60 Cross Country is covered by a five year/unlimited-kilometre warranty, and servicing needs to be carried out at 12 month/15,000km intervals.

Volvo’s capped-price service cost is about par for the segment and five years or 75,000km of maintenance will cost a total of $2500.

Volvo’s take on the raised wagon is a successful one, if not a substitute for a sportier BMW 3 Series Touring. With 75mm of additional ride height, this is a wagon that can actually go bush if you need it to, and that’s what this V60 Cross Country is all about.

The only detractors from the V60 Cross Country experience are its slightly stiff-legged ride in urban environments and that the cabin technology package isn’t as powerful or refined as some competitors.

However, the interior is superbly constructed using quality materials and the icing on the cake is the Bowers & Wilkins stereo that is a total knockout. I can confidently say no other car in this segment makes music sound this good.

If you don’t want an SUV, but also don’t want to compromise too much on go-anywhere ability, then the V60 Cross Country’s serene driving experience makes it an intriguing and individual alternative.

The Subaru Outback has arrived in Australia in new sixth-generation form. There’s a simpler lineup, but the Outback preserves its practical wagon shape, but it does without the turbo engine many buyers want

The raised and cladded Allroad version is the best and most balanced version of the Audi A4, particularly in turbo petrol 45 TFSI guise.

The Alltrack version of the Volkswagen Passat wagon promises a lifted ride height for gravel-road travel, and greater comfort everywhere – let’s see if this raised wagon lives up to its promises. 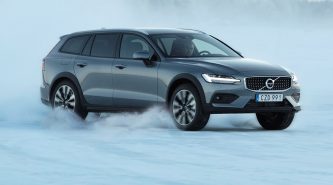 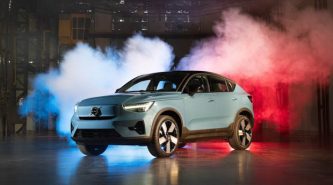 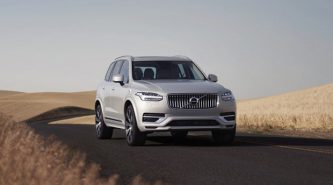 Volvo will launch new large SUV to slot beneath XC90, built in America and China 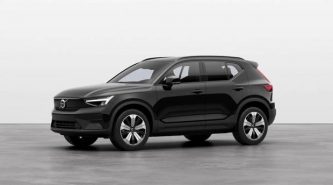 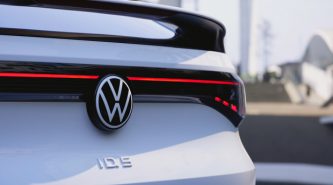 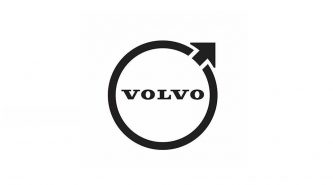 Volvo makes subtle changes to its logo for 2023 and beyond 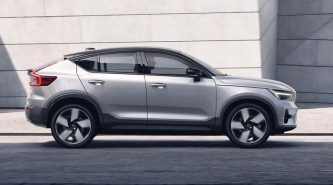 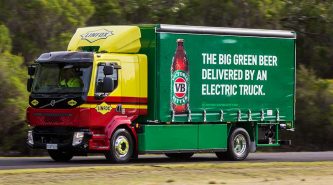 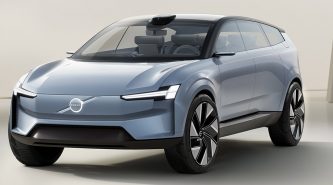 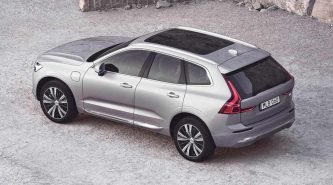 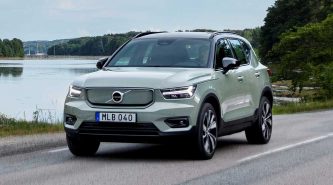