The first Range Rover Evoque was the brand’s fastest-selling vehicle ever. Now, it’s time for an all-new Evoque – and although it looks the same, there are significant changes under the skin that improve the way this vehicle drives.

Land Rover were early to the party in identifying demand for city-sized luxury SUVs. The first-generation Evoque, which debuted in 2011, sold nearly eight hundred thousand copies in eight years, and, testament to that, the baby Range Rover is a commonplace spot in the well-heeled avenues and cul de sacs of Australian cities.

A combination of stocky but handsome looks, a high driving position, decent practicality and the undeniable prestige of the Range Rover badge has afforded the Evoque a certain ‘je ne sais quoi’ that elevates it above the likes of the Mercedes-Benz GLA-Class and BMW X1. 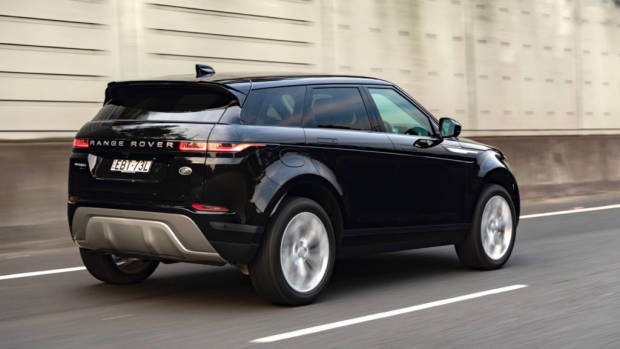 There were certainly some improvements to be made on the outgoing car, especially in the chassis department – the first Evoque used an old Ford platform – and in interior equipment.

It comes as no surprise, then, that the second-generation of the smallest Range Rover avoids throwing the baby out with the bathwater. The looks, both outside and in, are similar, with a few contemporary touches thrown in: there are flush, retractable door handles and it’s a digital feast inside.

Under the skin, the new ‘L551’ Evoque’s underpinnings are mostly all-new. It rides on Land Rover’s Premium Transverse Architecture, or PTA. PTA is a heavily reworked iteration of the outgoing Ford-era D8 chassis that sat under the old Evoque. The mostly-new platform was required to support the architecture of the mild-hybrid tech. 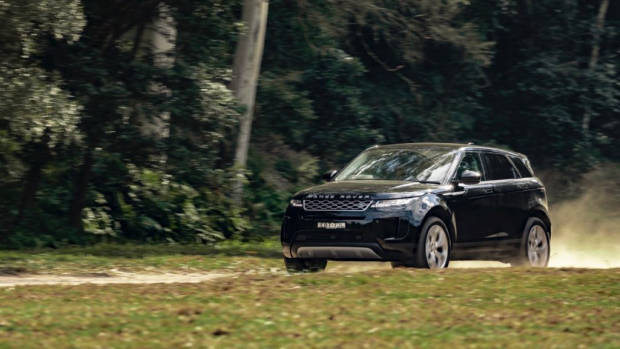 The new platform doesn’t cut a great deal of weight: the Evoque is still pretty hefty, weighing in at close to two tonnes once a couple of passengers are aboard. But it drives like a car weighing 300kg less, with clear effort being put into the fluency of the ride and handling.

In fact, the Evoque is something of a hoot to drive athletically. Feeling like a pumped-up hatchback in the corners, the new Evoque breathes with the road, absorbing bumps with the kind of aplomb you would expect from a Range Rover, even on the large 20-inch wheels of the test vehicle we drove.

The ride is certainly on the firmer side but it is utterly compliant. You feel the surface but it never intrudes or disrupts the serenity of the cabin. The plush front seats help to cushion out imperfections, too. 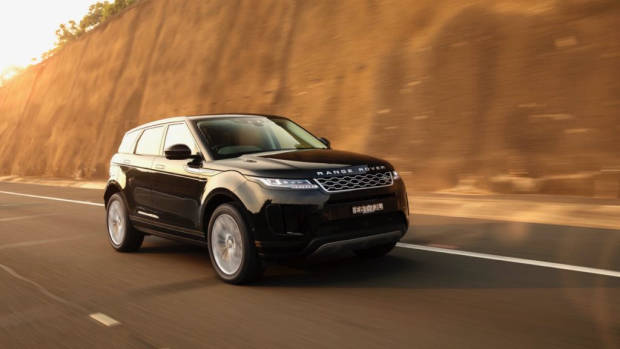 Meanwhile, characteristically light and direct Range Rover steering has been retained which does take a bit of getting used to: but once you get into the groove of how this vehicle turns in – quickly and with good bite from the Pirelli Scorpion Zero tyres – the steering reveals itself to be highly accurate.

The handling is neutral if you drive sensibly but it transforms into an unexpectedly joyful experience if you push the Evoque’s limits, with plenty of lift-off oversteer meaning that spirited driving is rewarded. This is a talented chassis.

Most of the engines are good, too. Four of the six four-cylinders on offer have partial electrification and carry mild hybrid electric vehicle (MHEV) status. Essentially, a beefed-up electrical system uses regenerative braking – which you feel when you lift the accelerator – to juice a larger battery. This battery then fills the torque hole after the engine auto-starts in traffic and reduces lag, noticeably. You’ll need to be careful of the engine you pick. All three of the two-litre diesels have the MHEV tech and they feel all the better for it: the middle oiler, badged the D180, feels about right for most people. With 132kW/430Nm, it is quick enough with plenty of torque while returning decent economy of about 8L/100km in our testing.

On the petrol side of the ledger, it’s mostly a disappointment. Land Rover’s Australian product planners rightly point out that this segment is quickly skewing towards petrol engines, but the brand’s two-litre gasoline four-cylinders lag behind those produced by their German rivals. The base P200 (147kW/320Nm) and mid-range P250 (183kW/365Nm) are average. 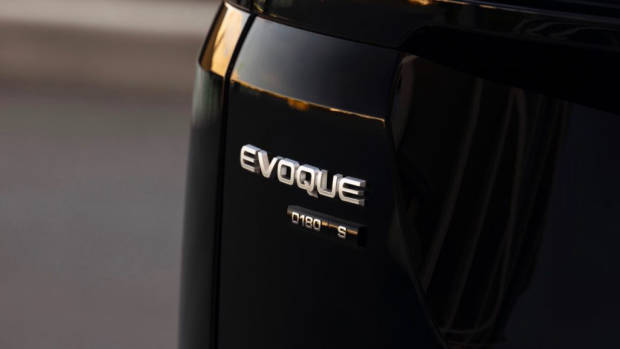 Only the top-end, costly P300, with 221kW/400Nm, gets the benefit of the hybrid tech – the other two petrols do not. Adding insult to injury, the mid-level P250 petrol we tested, which produces 184kW/365Nm, exhibited poor refinement with a loud and gruff engine note. The lag factor from both the turbo and the nine-speed auto gearbox was significant in the P250. In the diesels, the transmission feels fluid.

Go the D180 and you’ll keep costs in check while buying a resolved powertrain with good refinement.

A common bugbear of ours with Land Rover has been their scant standard equipment lists. The larger Range Rover Velar, for example, requires optioning up plenty of costly options before it feels properly luxurious. 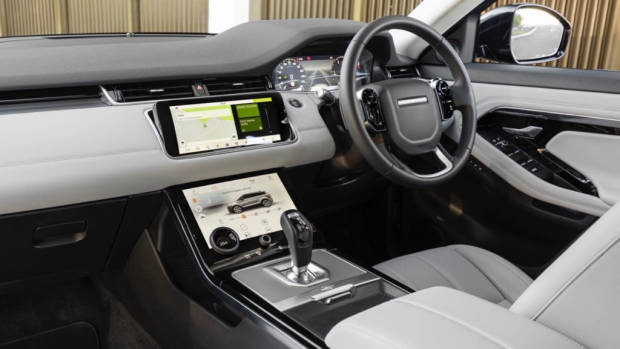 Land Rover Australia have fought for a better deal from the factory this time around, and the result is an improvement in the level of standard equipment, though some rival vehicles are still more generous.

Choosing a new Evoque is slightly more simple than in the previous generation, but there are still 14 different varieties available – 26 if you consider that most grades are available in a more sedate standard form or in R-Dynamic specification, with more sporty looks, for $2,970. And then there are the option packs, which can bring specification down to cheaper grades.

Almost any engine can be paired to any specification, with limited exceptions. The petrol engines are marginally cheaper than their diesel counterparts but, for the reasons outlined above, you’re better off picking the D150, D180 or D240 diesels. 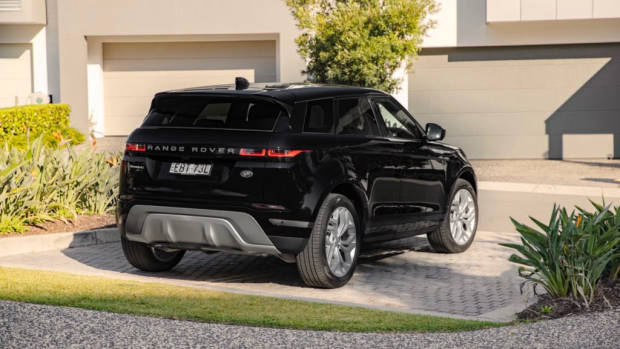 See the bottom of this review for a list of the price of every grade.

The range opens with the Evoque S (from $62,670 in petrol, from $64,640 in diesel). The S grade includes some important premium features like leather upholstery (10-way adjustable in the front), though you can substitute in sustainable eucalyptus textile at no cost. There’s a single 10-inch touchscreen with navigation, Apple CarPlay and Android Auto – the smartphone tech is new. A 180-watt stereo with six speakers sounds decent. 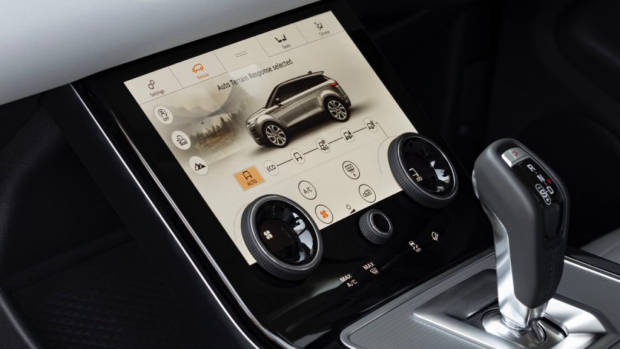 From there, it’s a $5,940 step into the Evoque SE (from $68,610 in petrol, from $70,580 in diesel). Six grand is steep but the SE upgrades the car to a good standard of tech. You get the second, lower touchscreen, which completes the cabin in our view. You get a digital driver’s display, too. The wheels step up to 20-inches, filling the arches, and you get ‘signature’ driving lights.

The seats are more supportive with 14 ways of electric adjustment up front, and memory. The SE adds a few safety features, too – a 360-degree parking camera, an exit warning that makes opening a door into the path of a cyclist harder, rear cross traffic alert, and automated parking. 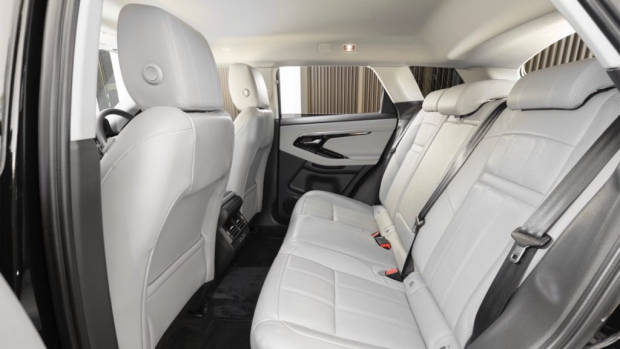 Notably, the HSE upgrades the interior treatment considerably. Two distinct tastes are catered for – the old-school (by default, the HSE gets plush quilted Windsor leather upholstery on the seats and dash) and the new-school (Danish ‘Kvadrat’ textiles and a suedecloth steering wheel replace the animal skin at no cost).

A number of option packs boost specification further across the range, and these differ in price based on the variant you’re adding it to. In particular, the drive pack ($1,340) adds high-speed AEB, adaptive cruise and blind spot monitoring to the S and SE. 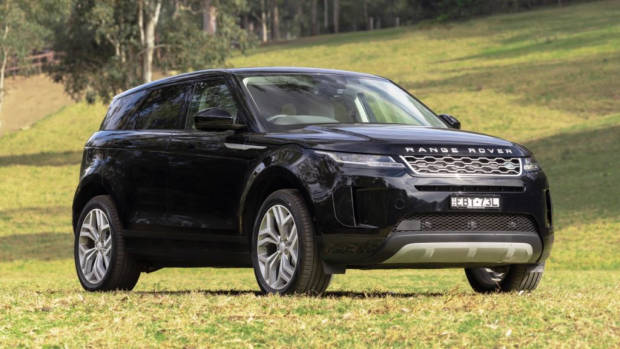 Naturally, we still have a voice at the back of our minds warning of Jaguar Land Rover’s reputation for poor electrical reliability, but if maintained and looked after, you stand a good chance. 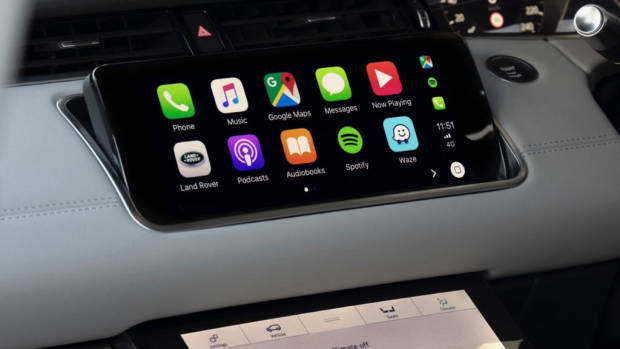 The warranty of three years or 100,000km is now looking very short in an industry that is increasingly adopted five year warranty terms with unlimited mileage – but in Land Rover’s defence, other premium marques are also dragging the chain here.

Ultimately, the new Range Rover Evoque is an easy SUV to like. It makes no apology for erring on the side of practicality and comfort, though if hustled, it is surprisingly fun to drive. As long as you’re careful with the specification you choose – to keep costs in check and to ensure you’re buying one of the better engines – there’s much to enjoy in this luxury crossover. 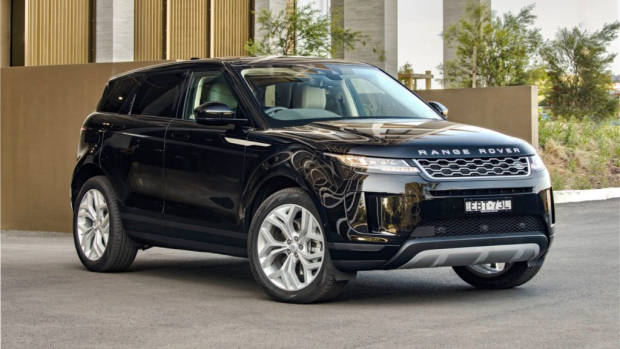