Another day, another small SUV – this segment is really on fire, up almost 27% this year with nearly 73,000 of these little crossovers finding driveways in Australia this year alone. The most popular cars in this segment are familiar – the Mazda CX-3, Mitsubishi ASX, Nissan Qashqai – but the globally-popular Honda HR-V has faltered a little this year, despite being one of our long-time picks in this competitive segment. That means it’s time for a mid-life update to keep the Honda high in the esteem of buyers: enter the 2019 Honda HR-V range, which has expanded from three to four grades. We drove the updated HR-V this week on the car’s national launch around Melbourne.

Proceedings get off to a good start with positive news for buyers, as standard equipment becomes more generous across the range. Low-speed autonomous emergency braking, that works between 5–32km/h, is now standard, while the VTi gains fancier projector-beam headlights with LED daytime running lights. The mid-spec VTi-S sees the return of Honda’s LaneWatch passenger-side blind spot camera that activates with the indicator, while the VTi-LX adds previously-optional safety technology in the form of lane departure and forward collision warnings, plus auto on/off high-beam. That said, lane and collision alerts are still not available on anything but the top-spec car. 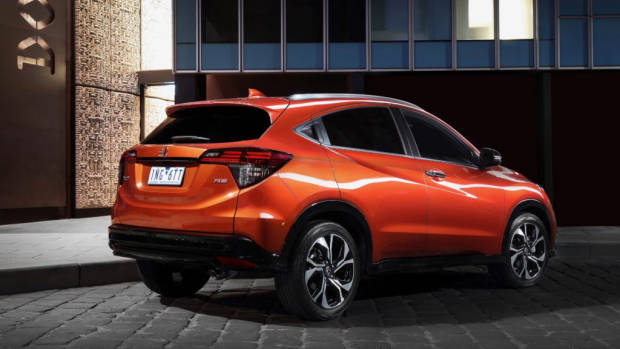 In addition to AEB, the $24,990 VTi also packs in climate control, 16-inch alloy wheels, an electric handbrake with brake hold, a 7.0-inch touchscreen with integrated satellite navigation, as well as Honda’s Magic Seats – more on those later. The $3,000 step up to the VTi-S ($27,990) is reasonable value, adding roof rails, automatic LED headlights with LED front foglamps, keyless entry and start, rear parking sensors, 17-inch alloys and a leather-wrapped steering wheel and gear shifter.

The next jump in the range is to the new addition – the HR-V RS, priced at $31,990. Popular in the Civic hatch and sedan range but not seen before on this SUV, the RS packs a sportier aesthetic, 18-inch wheels, auto wipers, paddle shifters, and privacy glass. However, it uniquely picks up some mechanical changes in the form of quicker steering and fettled suspension. Plus, the RS picks up the extra noise insulation and comfy, heated leather seats previously reserved for the top-shelf VTi-LX. For this reason, we think the RS is likely the HR-V to go for. 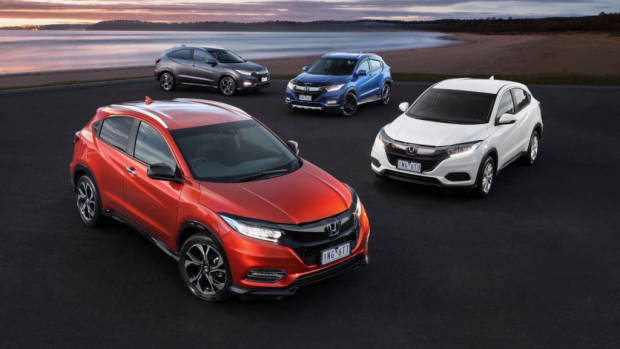 The VTi-LX is still around but it’s more expensive now at $34,590. That price rise is mainly down to the standard fitment of the previously-optional ADAS safety package as mentioned before. The ‘LX’ also exclusively gains premium features like eight-way electric adjustment for the driver’s seat, a panoramic sunroof, dual-zone climate control. Other LX features, like auto up/down windows and front parking sensors, should be included rangewide. We would suggest that if you’re going to spend $35k on an HR-V, you should ensure you also consider Honda’s bigger CR-V – a midrange model in that vehicle costs about the same.

While we’re happy to see a broadening in the HR-V’s safety offer – AEB across the range is a good start in matching the safest cars in this segment, like the Toyota C-HR – Australia still doesn’t receive the same, full Honda Sensing safety suite as American and European market HR-Vs. Overseas, the HR-V is available with adaptive cruise control and lane keep assist, but not here. It’s worth noting that every Toyota C-HR has those features standard. 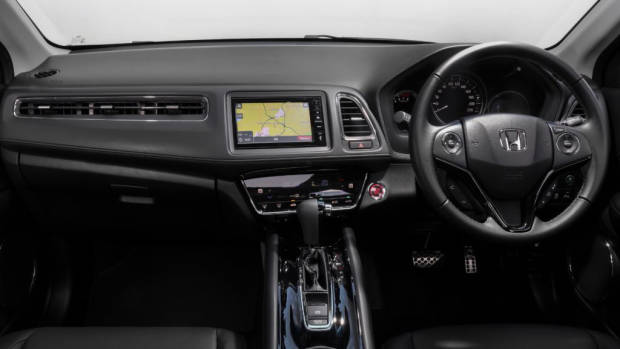 The specification anomalies also extend to the seven-inch touchscreen. In the US, the HR-V gets a modern touchscreen with Apple CarPlay, Android Auto, DAB digital radio, and quick-charging USB ports placed sensibly in the centre console. Not here, though: Australian HR-Vs are relegated to an aftermarket-looking and feeling system without any smartphone mirroring, with no digital radio, and with a single poorly-located USB port near the screen itself, meaning you have a cable dangling in the middle of the cabin. Not very pleasant. The Toyota C-HR makes the same aesthetic error and we have made the same comments about that car.

It leaves us with the impression that Australia does not sit high in the global Honda pecking order, at least when it comes to car technology. 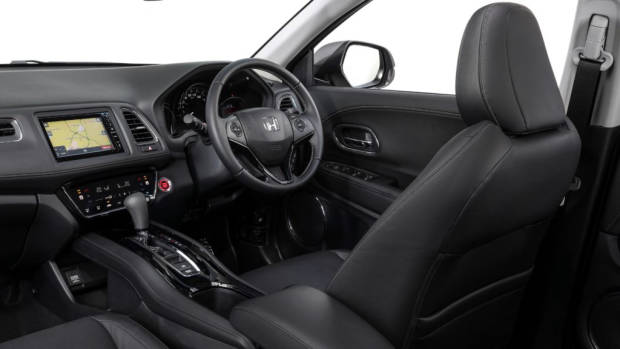 Leaving tech to one side, though, the HR-V’s interior is a class act. The materials used are soft to the touch, rear doors included – this is exceedingly rare in the small SUV segment. The soft surfaces even continue along the classy centre console where your legs naturally rest – that’s very nice indeed. The HR-V’s cabin set a high mark for Honda design and quality upon its release in 2015, and many newer Honda models haven’t reached this high watermark.

The sheer practicality of this vehicle continues to be one of its strongest advantages. It beggars belief what you can fit into the HR-V. Even before you play with the “Magic Seats”, the big 437L boot is generous for the segment – as is the 1462L on offer with the back seats folded. That’s more than a midsize Mazda CX-5, let alone the HR-V-rivalling CX-3. Thanks to the Magic Seats feature, the rear seats fold completely flat, opening up a low and wide available space. Alternatively, the seat bases can also be folded upright to lie parallel with the backrest, which is enough to carry tall plants, and so on. It’s this level of versatility that no other small SUV offers, let alone medium SUVs. 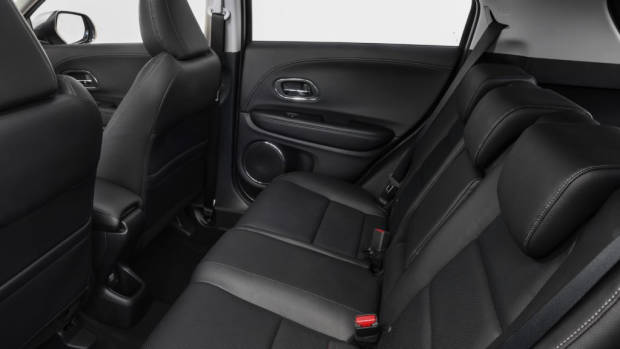 Back seat room is also quite spacious – in fact, the HR-V comes close to the larger CR-V for accommodation in the second row. The doors also open nice and wide, and the ISOFIX points are obvious to the eye. Two map pockets feature in the rear – take note Mazda – as well as a single cupholder, a 12V socket and a bottle holder in each door. No rear air vents is a little cheap, though. The front seat is similarly roomy and practical, with a large glovebox, two configurable cupholders in the centre console, reasonable door pockets, and a handy tray under the dash to store phones and wallets.

Under the bonnet of every Australian HR-V is the very familiar 1.8-litre four-cylinder petrol engine that’s been used in Hondas for years, lightly updated for 2019 to make 105kW/172Nm. Peak power and torque are both reached high up in the rev range at 6,500rpm and 4,300rpm respectively, which gives a clue to this engine’s drivability – it needs a hard rev to get the most out of it. Around town, the HR-V is good driving partner - it’s quiet and tractable, but when more power is demanded, the lack of torque and refinement is notable. Our launch fuel economy of 7.7L/100km was reasonable. 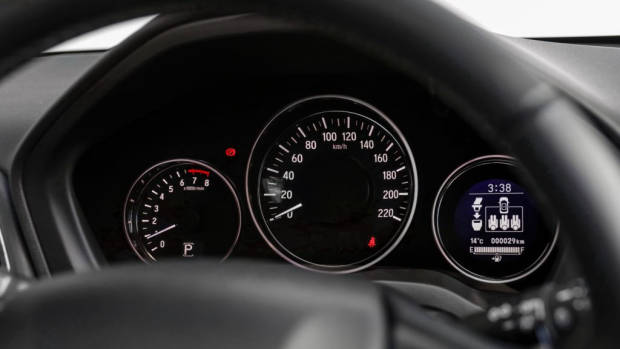 Ideally, we’d love to see the 1.5-litre turbocharged four-cylinder that is already used in the Civic applied to the HR-V. This engine is already destined for European-market HR-Vs. The hybrid engine available in Japan would also provide more torque.

The sole gearbox is a CVT automatic, which has been massaged for 2019 with newly-stepped ratios making it act more like a conventional automatic. RS and VTi-LX models have paddle shifters, allowing you to override the logic with with seven artificial gear steps, which improves drivability somewhat, though performance remains average. As with the updated CX-3, the Toyota C-HR’s turbocharged refinement is far superior to the HR-V. Its 1.2-litre turbo petrol engine may be 20kW less powerful, but it offers 13Nm more torque at much lower revs and is a far superior driving partner. The Toyota’s unstressed nature also means it’s more frugal. 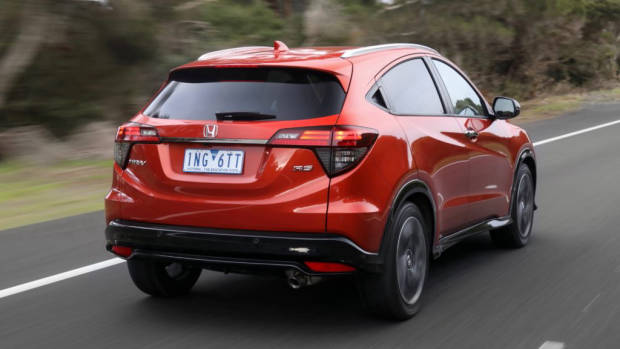 The HR-V’s handling has been improved for 2019, but only in the new RS model, with its unique suspension tune. It’s a shame the tune isn’t rangewide as we really like it. The extra suspension tautness made the RS more comfortable over the typically rutted Australian roads we experienced on the HR-V launch drive, with better body control and a much quicker reaction after larger bumps. Out of the four models, the RS stands alone in quite noticeably improving the HR-V’s dynamics.

All in all, the 2019 updates to the Honda HR-V range aren’t bad, but they don’t go far enough. The small SUV segment is red hot and highly competitive, and the HR-V needs to do more than just be the practicality star to earn a podium spot in the sales charts. The thing is, everything we believe the HR-V needs to be a top-spot performer is already offered with this car in the European market: the 1.5-litre turbocharged engine, the full Honda Sensing safety suite, and proper technology in the cabin. Yes, our HR-V is produced in Thailand, and Europe’s is not. But at the end of the day, factory location and production choices are not the customer’s concern.

We love the new HR-V RS’s fettled dynamics, the practicality remains absolutely stellar, and this Honda’s class-leading cabin material and quality continues to make the Honda a key small SUV to consider, alongside the Mazda CX-3 and Toyota C-HR. But with the above improvements for 2020, the HR-V would have a shot at besting all of them. 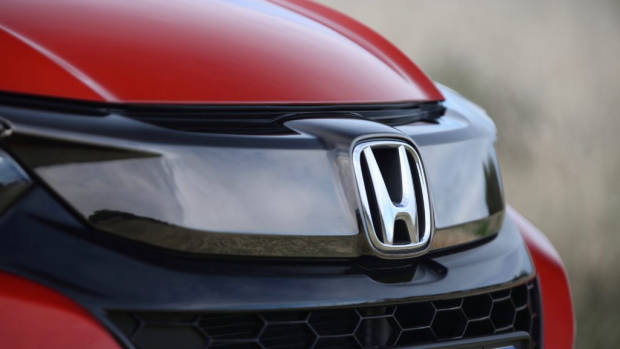