IN the face of a rapidly shrinking midsize passenger-car segment, life should – in theory – be pretty bleak for the six-year-old, third-generation Mazda 6. Up against a downright existential threat from family buyers flocking to high riding SUVs, including Mazda's own wildly-popular CX-5 with which the 2018 Mazda 6 shares dealership floor space, one might wonder whether the Japanese brand was tempted to throw in the towel on midsizers entirely.

Actually, Mazda's opinion is quite the opposite. "If the proposition is right, the potential for strong sales is there," Vinesh Bhindi, Mazda Australia's managing director, told Australian media at the local debut of the 2018 Mazda 6 – a comprehensive second facelift of the current 6. This round of changes amount to a fair bit more than the first facelift, a basic nip and tuck that arrived in 2015. While there are further visual refinements at the front and rear, the 2018 6 packs a substantially upgraded interior, an uprated diesel option, and on premium variants, a high-power turbo petrol borrowed from the full-size CX-9 SUV. 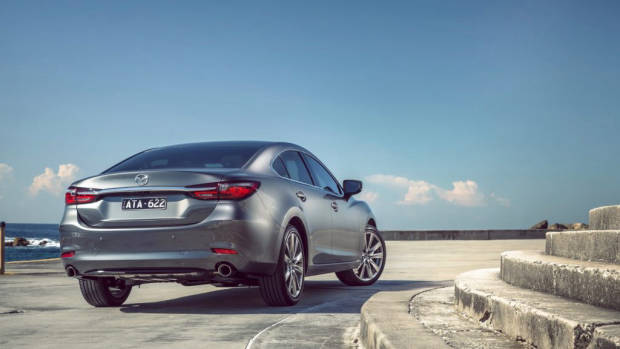 Those upgrades make a meaningful difference in the flesh, and behind the wheel, as experienced at the model's launch in Victoria's High Country this week. Having experienced the uprated diesel – a 2.2-litre twin-turbo unit now making 140kW/450Nm (+11kW/+30Nm on last year) in the CX-5 a fortnight earlier, we concentrated our drive time exclusively with the new 6 as equipped with its new turbocharged petrol engine. 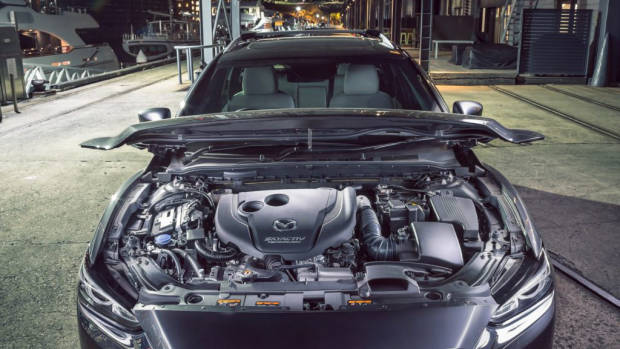 The 2.5-litre naturally-aspirated petrol gains cylinder deactivation, assisting real world fuel economy slightly. While we didn’t drive it this time around, we know it’s a capable if unexciting engine – the real action is found in either of the turbo mills: the very muscular twin-turbo diesel, which now delivers a very convincing 450Nm whallop of torque (up 30Nm), and in particular, the new turbocharged petrol, which equals the outgoing diesel’s torque (a stout 420Nm), while officially making 170kW of power, but more like 185kW if you treat the car to 98-octane petrol.

Across a full day of touring, we concentrated on the new engine. The turbo petrol was more than adequate in the CX-9 that debuted it, so it’s no surprise that it feels pretty quick in the midsize 6, which is a relative bantamweight: here, the engine has 300kg less mass to move. While the new 6 turbo isn’t lightning quick off the line, it has heaps of midrange strength and stamina. Overtaking is dispatched without issue. The turbo petrol is a lot more refined than the diesel, but it offers similarly torquey responses with more frenetic top-end power. Fuel economy was only okay, though; we averaged about 9L/100km in touring conditions. 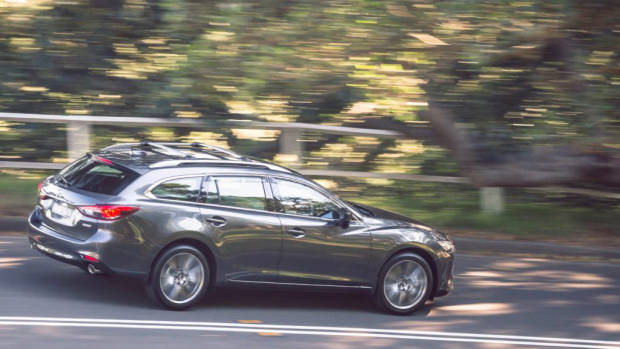 What hasn’t changed in this facelift are the Mazda 6’s other dynamic characteristics. Chief among these is the sporty handling bent, with beautifully mid-weighted, natural steering feel, good body control, genuinely fun responses when being punted down a good country road. Need to trade in the MX-5 on a family car? You could certainly do worse. That said, the 19-inch wheels in Bridgestone Potenza tyres deliver good grip, but an unsettled low-speed ride quality that only calms down at highway speed. Plus, while extra work has been done to quieten the 6’s road noise, there isn’t a major change and Mazda’s sedan and wagon are still considerably louder than the equivalent Volkswagen Passat.

Across a full day of touring, we split our time equally between the GT turbo sedan ($43,990) and Atenza turbo sedan ($47,690). Both grades – but particularly the Atenza, which now serves as Mazda's named flagship vehicle in Australia – were a clear illustration of the 6's pride-of-place position in the brand's lineup, and of the effort that has gone into the changes. It may be late in its life, but the Mazda 6 is now a bona fide competitor to sporty premium midsizers like the Volkswagen Passat 206TSI. Before chatting performance, let's talk about the design changes. While the profile, bonnet and roofline of the 6 is unchanged over last year, subtle changes to the front and rear end add up to a meaningfully different appearance, especially in dark colours like Deep Crystal Blue and Mazda's signature monochrome colour, called Machine Grey – both of which appear liquid-like in appearance. The front end is lower and broader, while at the rear the deletion of matte black plastic panels, and pushing enlarged twin exhaust pipes right to extremes works a bit of magic.

Mazda says the designers worked to a theme of "mature elegance" – a phrase perhaps lost a little in translation, but the meaning becomes clear inside. The Atenza's cabin dramatically advances into premium territory, with a delightfully tasteful mix of premium materials that feel well above Volkswagen-quality. Soft, plush nappa leather seats in walnut brown, or white, look and feel expensively comfortable; genuine Japanese Sen wood and Ultrasuede sit agreeably together on the dashboard. Soft touch materials abound with far more generosity than a Passat. The Atenza's interior is beautifully resolved, feeling more $80,000 than $50,000. Interior finishing is now a significant differentiator of the Atenza, and Mazda have more clearly delineated the top-shelf 6 from the third-rung GT, helping to justify its $3,700 premium. In the GT, you lose the Nappa leather in favour of harder black or white cowhide. The Atenza’s Sen wood is substituted for aluminium – which still looks swish – while the Ultrasuede pieces are swapped out for faux-leather. For cabin ambience, then, the GT is good; the Atenza is great.

Beyond appearances, though, the 6's cabin remains a pretty functional and usable place. The driving position is comfortable, if a touch high; visibility is excellent. A soft leather steering wheel is standard and appears inspired by the MX-5. The outgoing car's 7-inch touchscreen is upgraded to 8-inches, remaining within arm's reach; the infotainment can also be controlled by an intuitive rotary dial between the seats. 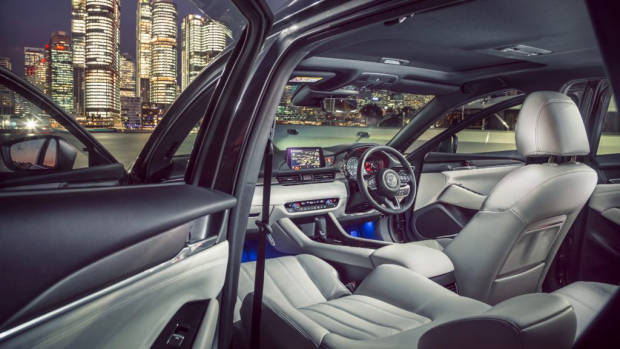 The screen packs navigation and a plethora of media options, including digital radio, on all grades. Mazda's in-built software leaves quite a lot to be desired, though. The graphics are outdated and cartoonish, and Spotify doesn't work well through USB. Apple CarPlay integration would solve most of this, and it is coming later this year. Ideally, CarPlay would have arrived in time for the 2018 Mazda 6's launch, but it hasn't – and Mazda Australia are noncommittal about whether initial buyers of the 2018 car will be able to have their vehicle retrofitted later.

The second row is pretty accommodating – especially in the shapely wagon, which affords better headroom than the sedan’s coupé-like roofline. However, both Mazda 6 body styles will accommodate two six-foot adults, while the middle perch is a kid-only zone. More impressive still are the standard amenities in back: air vents feature on every car, as do two back-seat USB power ports. The GT and Atenza up the ante further with heated rear seats – something the kids will love on winter school runs. 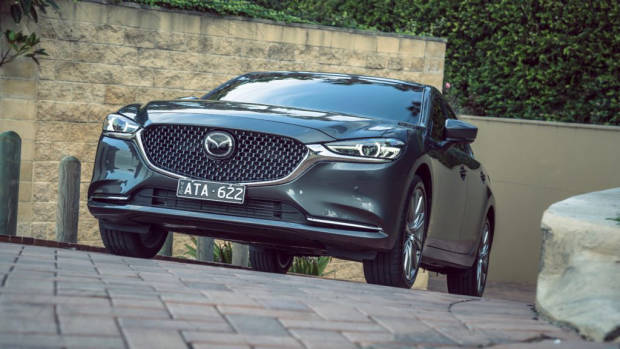 Further back, cargo room is a good 474 litres in the sedan, and 506 litres in the wagon, which uses a slightly shorter wheelbase. That said, the wagon’s enormous liftgate unlocks an altogether more practical space, with a trick cargo cover that moves out of the way when the gate is opened. Unlike in the CX-5 SUV, though, the Mazda 6 wagon’s tailgate is not electric. 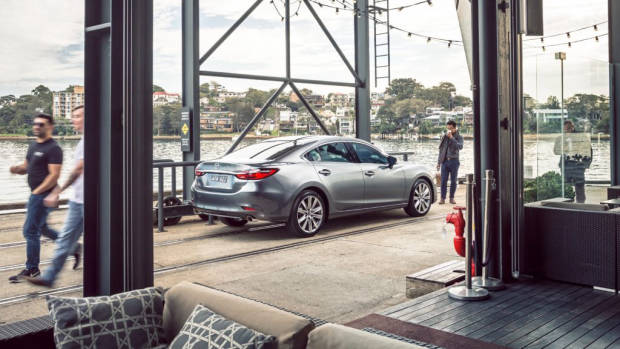 We have two particular recommendations. The first is the Touring diesel ($39,690 sedan, $40,990 wagon), which lets you avoid the so-so naturally-aspirated petrol of the lower grades in favour of the 450Nm turbo diesel. The Touring also gains black leather seats, with 10-way electric adjustment and memory for the driver, a quality, 11-speaker Bose stereo, keyless entry and start, and auto-folding mittors.

If you’re after a near-luxury car at mainstream prices, though, we recommend skipping the GT and heading for the Atenza turbo petrol ($47,690 sedan, $48,990 wagon), or the diesel for $1,100 more. The Atenza shares the GT’s 19-inch wheels and front and rear seat heating, but uniquely gains plenty of desirable features: very soft Nappa leather seats that are also cooled in the front row, Ultrasuede and Sen wood trim, additional LED ambience lights inside, a sunroof, and adaptive headlights.

While subtle in isolation, the revisions to the Mazda 6 for 2018 – the new turbo petrol engine, the upgraded diesel alternative, and the subtly updated design in and out – add to make a considerable difference. Certainly, the 6 remains a frontrunner in the family car class – and a great alternative to midsize SUVs, including Mazda’s own CX-5. The 6 is better to hustle down a country road, packed with more technology (including critical safety tech), and cheaper than its SUV brethren. If you’re looking for a car to put your kids into, don’t discount the humble sedan and wagon. There’s much to love in the Mazda 6. 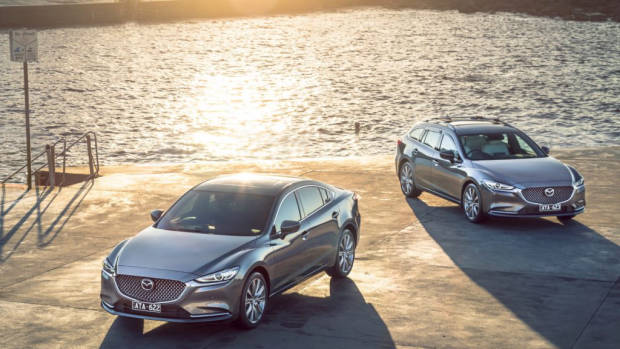