What’s more important in a fast sedan? Outright speed, or fun? Given that sensible four-doors are rarely as sharp as their two-door counterparts, engineering in favour of passionate dynamics is legitimate.

It seems Lexus agrees. The latest effort of the brand’s F performance division is the GS F. Under a coat of Lava orange paint, F have transformed the competent but unremarkable GS sedan into a loud, in-your-face executive express. But it’s not built to beat a BMW M5 or a Mercedes-AMG E63 in the 0-100 sprint stakes.

Instead, the 2016 Lexus GS F is built for fun. Under the bonnet sits an old-school, five-litre V8. It’s naturally aspirated: unlike the Germans, there are no turbos here. No turbos means there’s not much torque down low. Instead, to push the 351kW of power to the rear wheels, it’s up to you to wring out the motor.

And if you wring it out, you will find a 7,300rpm redline. Approaching it is a sensual experience akin to a symphony orchestra in full flight. Feed in engine speed and butterfly valves – and some well-calibrated speaker enhancements – open up to a brutal scream. There’s no hiss of induction. There’s no short-shifting around turbo torque. It’s just you, a tremendous engine, rear wheel drive, decent handling, and a beautifully-built car.

Who would have ever thought we’d be describing the Lexus GS F as the purist’s option in the segment owned by the BMW M5?

And yet, that’s exactly what this car is.

F Division started from a good place with this car. The GS is one of Lexus’s most underrated models. The chassis is finely balanced – stiff, but supple. The six-cylinder GS 350 left us feeling that the GS platform could offer much more.

As it happens, it can. Sticking in the V8 and dramatically increasing the stiffness hasn’t spoilt the GS experience. The GS F is a very fast and capable car, but it hasn’t lost the underlying car’s impressive composure.

Though it’s an engine built for brawn, not speed, the GS F completes the 0-100 run in 4.6 seconds. With their turbochargers, the Germans are quicker: 4.4 seconds in the Audi S6 and BMW M5; 4 seconds in the Mercedes-AMG E63 S.

Rear wheel drive makes all that power entertaining: the experience couldn’t be any different from the clinical all-wheel-drive Audi. The sticky Michelin Pilot Supersport tyres are easily overcome with a hard stab of the right foot. Unusually for a Lexus, the traction control is not too invasive. On a winding road, the GS F is a hilariously fun handful, with a bit of slip at the back encouraging throttle steer in flowing corners.

There are hints of the underlying GS in the steering. It’s incredibly accurate – sharp, even – but the feel is a bit artificial. Like other electric power steering racks, it’s a huge challenge to communicate the same road feel as hydraulic systems. At least the GS F gets most of the way, and you come to appreciate the real accuracy of the tiller: despite its heft and size, it’s easy to punt the GS’s front-end into corners of all kinds.

Despite the 19-inch wheels, the ride is still mostly compliant. At lower speeds you notice potholes and imperfections, but on the highway the GS F is a lovely cruiser. That’s aided by superb noise insulation which drowns out everything but glorious engine noise.

The paddle-shifted eight-speed automatic goes without the BMW and Audi’s double-clutch arrangement. As a result, it’s a little slower – and in normal mode, it can feel a bit gluggy. Sport mode sheds off the lag, and a huge novelty of the aspirated V8 is being able to pull a paddle down into second gear at 100km/h. Cue awesome, angry soundtrack. The Lexus GS cabin is finished beautifully. It is made of soft, luxurious materials. Build quality is excellent: the Lexus feels better-built than each of the Germans we’ve named as competitors.

F Division have changed just enough inside the GS to remind you that you opted for the fast one. Selected leather surfaces are switched out for alcantara, including parts of the seats and the centre console cover. Full leather can be optioned back in, but the mix works well and the texture keeps you in place while cornering. The blue stitching around the cabin looks good.

The front seats look like buckets and almost are: only proper harness ports are missing. Bolstering is great, particularly for skinnier types like me: bigger frames will need to test drive. Remarkably, long-distance comfort is excellent. A return Sydney-Canberra trip in a day was effortless, thanks to the seats and the sheer quietness of the cabin at high speed.

Simple things in here are done well. Metal knobs turn with the right weight, and the indicator stalks – yep, we’re onto the detail of stalks here feel so luxurious.

An enormous twelve-inch screen presents navigation and music functions. It’s high and deep in the dash, so no touchscreen here. Instead, a fiddly mouse-like controller called Remote Touch allows you to navigate. It’s frustrating enough when stopped, but then it locks you out of certain parts while moving, which is frustrating. We are looking forward to the next generation of Lexus products that do away with it.

Back seat passengers are treated to two cutely-bolstered seats that mimic those up front. As a result, the middle seat is pretty uncomfortable, though for short trips it works. Legroom and headroom in the back are generous. Four aboard is no problem.

Generous room for four and a boot large enough for their luggage naturally makes the Lexus GS F a practical sports car. The clever cabin also hides large storage spaces – the central box was big enough for us to stash two cameras in, so your everyday clutter should pose no real challenge.

Where some competitors pull away is the ability to fold the rear seats. This isn’t possible in the GS F, meaning the 520 litres you see in the rear boot is all you’ll get. There is a ski port between the boot and cabin, so if you fancy hitting the slopes in a rear wheel drive V8…

To its credit, the boot on the GS is big, square and sensible. Luggage slides in just fine but those after true practicality in this segment should buy a fast Audi station wagon.

Just shy of five metres long, the GS is a big car but it surprises with its manoeuvrability. The steering is really light when parking, and visibility is good. The standard rear cross-traffic alert was great on my street with its perpendicular parking, and the reversing camera is clear.

The GS F is a pretty safe bet.

Servicing a complex sports car is usually expensive, but at least with the Lexus GS F you’re living under the comfortable umbrella of Toyota Group reliability.

The GS avoids silly six-monthly maintenance of some other models in the range, giving you a year or 15,000 kilometres between scheduled servicing.

The Lexus ownership experience around servicing time is excellent. The dealership will come and pick up the car from your house, leaving you with a replacement for the day – before dropping the GS F back when they’re finished.

Capped price servicing is always advantageous but when you’re playing in the $150,000+ game, it’s quality of experience that beats outright cost. Here, Lexus are doing well.

As we mentioned in our comfort rating, the GS F feels bulletproof. Material quality is excellent. Lexus doors could feel heavier, but overall, the car feels utterly solid and luxurious.

This generation of the Lexus GS has proven reliable. JD Power surveys reveal that the overall mechanical, body and interior quality is above average.

Predicted Lexus GS F depreciation is above average. After three years and 42,000km—the average—Glass’s Guide indicates that the GS F should retain about 56% of its value. That’s far ahead of the predicted 52% retention for the BMW M5 Pure and Mercedes-AMG E63 S.

Lexus models usually represent good value. The GS F is excellent value: at $148,800, it’s actually cheaper than it should be.

There is just one model in the range and options are limited to a number of ‘enhancement packs’. The only one we’d consider is the pack 4 ($2,900), which restores full leather and adds cooling to the standard seat heating.

All the paint colours are included in the price. Our orange, plus the electric blue and vermillion red are striking. Black or grey makes a GS F a real Q-car.

The GS F may not be quite as quick as the Germans but it’s certainly more attainable.

The nearest true competitor is more than $20,000 more expensive and the Mercedes-AMG E63 is an enormous $100,000 dearer. It makes you think – can the E63 be that much better? The answer is that it is simply not. 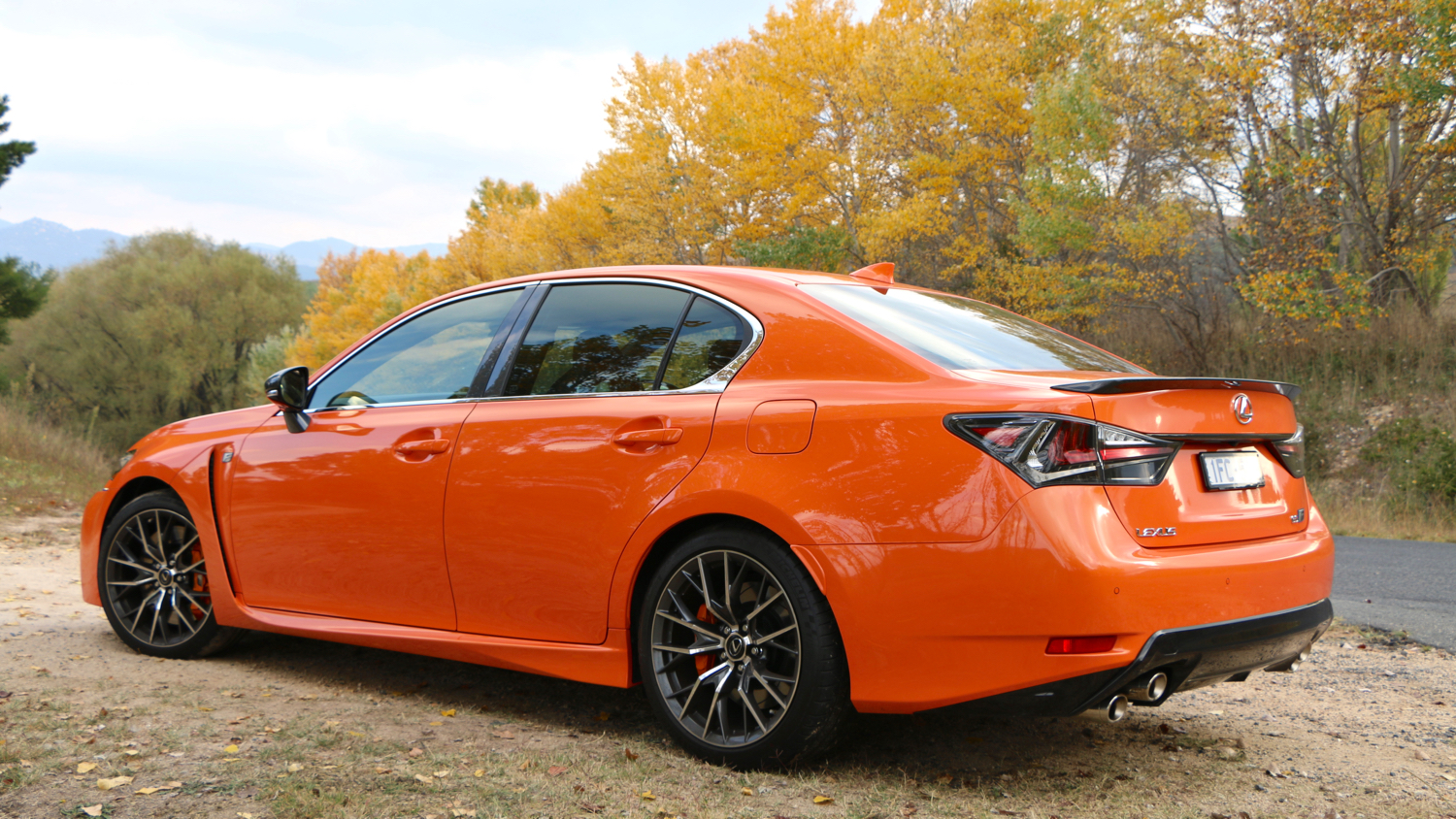