The Jeep Grand Cherokee is a lot of car for the money: this big, brash American represents great value in family motoring.

The Grand Cherokee is the recipient of a growing number of 'best SUV' awards – so we thought it was high time that we borrowed a mid-range example to see what all the fuss was about. After subjecting it to two airport runs, some moderately heavy off-roading, a pilgrimage to Ikea and routine, and daily, rough family motoring, we're happy to confirm that – mostly – the Grand Cherokee lives up to all that hype.

This isn't motoring at German levels of sophistication; nor is quality at Japanese levels of precision. But with this proposition, you get plenty of metal per dollar. This is big, durable motoring. There are three powerful engines on offer, including a frugal diesel, and a not-frugal-whatsoever V8. The range spans $40,000, but all Grand Cherokees represent good value, particularly when compared against European rivals.

ChasingCars.com.au borrowed this vehicle for our Jeep Grand Cherokee review:

Jeeps of the past were tremendous off-roaders, but were woeful around town. The latest iteration of the Grand Cherokee convinces us that such performances are now squarely behind the American manufacturer. This is still a big wagon, but the character is more car-like than ever. The Grand Cherokee is most comfortable as a highway cruiser, or traversing unsealed trails – and it's liveable as a family runabout. Around town, it's hindered by its tiresome, loose steering ratio that means parking and navigating tight streets requires more turns of the wheel than in most competitors.

Three engines are available: we drove the 3.6-litre, naturally aspirated petrol V6. With 210kW of power, and 347Nm of torque, the V6 is punchy enough for almost everybody, but the lack of modern fuel-saving technologies means heavy fuel consumption. The pick of the motors is the three-litre turbodiesel, which is torquey and efficient. If you're spending other people's money, or prefer the brashest of American engines, both 5.7-litre, and 6.4-litre petrol V8s are available, and the higher-capacity Hemi motor will blow your mind.

An eight-speed transmission makes for a smooth driving experience, although the box can slur the lower gears a little around town. What is guaranteed is that the engine is quiet on the motorway as the seventh and eighth gears allow it to tick over at low revs; however, punch it off the line and the naturally-aspired six does sound pretty sweet.

The powertrains are refined, but the Grand Cherokee's lacklustre handling betrays one area where the Americans still trail their competitors. The Jeep's steering is overly light in all situations; the steering wheel itself is quite massive; and there is a near-total feeling of disconnection with the front wheels. Punting the Grand Cherokee around a mountain road is guesswork. There are signs of improvements: the newer, smaller Cherokee offers much more engaging handling.

The Grand Cherokee's ride is mostly pleasant, although the suspension can jar more than expected over potholes and urban speedhumps. The ride settles as the speed increases, though, meaning this is a truck that is great for eating long kilometres travelling between Australia's cities. The Selec-Speed off-road terrain selector boosts the Grand Cherokee's competence off the tarmac, as well. The simple dial in the centre console allows you to nominate a terrain; plus, the generous approach and departure angles afford a high degree of competence in navigating obstacles. Like the best of American motoring, the Jeep Grand Cherokee isn't small. In fact, its remarkably capacious interior means it's a comfortable choice for everyday family motoring, or covering lots of kilometres on the highway. The Limited model gains durable leather trim – it may not be as premium as the hide you find in the Volkswagen Touraeg, but it makes the cabin feel a little more special.

All models gain Jeep's fantastic eight-inch uConnect touchscreen on the dashboard. The base Laredo doesn't get navigation, which is a cheap omission when the bare bones are all there: however, all models from the $57,000 Limited upwards include this technology. The whole system is simple, and it's easy to connect your phone and choose between music inputs – although audio quality is just okay (the range-topping SRT gains a premium Harmon-Kardon system).

Some cabin materials have taken a step up in quality since the current Grand Cherokee shape debuted in 2011. The dashboard is now soft-touch, as is the jet thruster-style gear stick. However, our test car had 20,000 kilometres on the clock: the leather on the front seats was already a little worn, and the metal-effect plastic in the centre stack was already scratching.

The Grand Cherokee isn't available with seven seats – in the large SUV class, that's an unusual omission. However, it means that accommodation for the five that do fit inside is generous. The back seats are well-shaped, and offer plentiful legroom and headroom for adults. Three bigger teenagers will be perfectly comfortable here. If your children are younger, they'll find it easy enough to climb in – and you won't need to bend down to fit child seats in this tall wagon.

The lack of seven seats means you won't be able to fit an extra two kids into the Grand Cherokee for bigger outings, but at least storage spaces are plentiful inside the cabin. There's a deep, wide central bin, a large glovebox, generous door bins, and pockets behind both front seats. If you're a hoarder, fear not: there is plenty of room to bring along everyday essentials. And the Jeep looks after coffee lovers, with very-American cupholders accommodating even the largest of Starbucks frappé cups.

The boot is pretty enormous and accessible through the standard electronic tailgate. With the back seats in place, 782 litres of space provides room for several suitcases or an enormous Christmastime shopping trip. If you need more than this—as we did for our house-furnishing trip to Ikea—you can fold the back row for a cavernous and completely-flat 1554 litres.

The Grand Cherokee doesn't benefit from a capped-price servicing program – and services are a six-monthly affair. However, since Jeep was integrated into the wider Fiat group, reliability and quality have both been on the increase. Grand Cherokees in our market are all sourced from the Detroit, Michigan factory. A number of cabin materials were upgraded in the 2013 refresh: soft-touch plastics and leathers are now commonplace around the interior.

Sophisticated safety technology, including active cruise control and forward crash mitigation is optional on the Laredo and Limited, and standard on more expensive models. However, all Grand Cherokees benefit from a standard reversing camera, and seven airbags – although the four-star crash rating awarded by Euro NCAP, and endorsed by Australia's ANCAP program, leaves a waterproof crash rating to be desired.

The Jeep Grand Cherokee price depends on which of the five trims, and four engines you opt for – it's a complex range! The base Laredo is the price leader in this class of SUV, with the 4x2 V6 petrol currently leaving Jeep dealers at just $46,000 on road: exceptional value for a big and capable truck. The $57,000 Limited we tested is the mid-range car. From here, the Overland and Summit add luxuries, and the flagship, 6.4-litre SRT8 shoves in massive performance.

Excepting the Summit (diesel only), and the SRT (crazy V8 only), in the other models, swapping out the standard, 3.6-litre V6 for either a 5.7-litre V8, or the great diesel, costs an additional $5,000. At that price, you need to work out if you run the mileage to make the diesel worth your money. Otherwise, the options list is short. You can add a complete off-roading package to more basic Grand Cherokees for about $5,000; otherwise, $700 cooled seats and a $3,000 sunroof compete for questionable value.

The Limited, either as a 3.6-litre petrol or a 3.0-litre diesel, is our pick of the range. If this is a weekend family car, take the petrol; if you drive long miles right through the week, the diesel's punch and efficiency will justify the price premium. Look for target prices around $60,000 for the petrol, and $65,000 for the diesel.

Toyota Kluger GXL AWD ($53,990 list | $59,006 on road): this family-sized Toyota SUV debuted earlier this year. All Klugers are very large inside and out, and the mid-spec model offers comfortable seating for seven. Bizarrely, there's no satellite navigation available, but the GXL is fairly well equipped. The 3.5-litre V6, like the petrol six in the Grand Cherokee, is pretty thirsty, but very smooth.

Nissan Pathfinder Ti 3.5L ($60,990 list | $66,988 on road): the Pathfinder offers room for seven, but the Nissan is more expensive than both the Jeep and the Toyota. Additionally, these days the Pathfinder is almost strictly an on-road affair – the $60,000 Ti model is well-quipped, but the front-wheel-drive platform means it's more 'raised wagon', than trail-ready.

Ford Territory Titanium Petrol AWD ($54,990 list | $60,098 on road): the Ford's four-litre V6 is about as thirsty as the smaller engines in the Japanese and American choices. It's also a chance to own one of the last SUVs ever produced in Australia, as production winds down over the next few years. The Territory's Falcon underpinnings mean it is simple to run and very reliable. Plus, it still has one of the most comfortable interiors for seven in the segment. 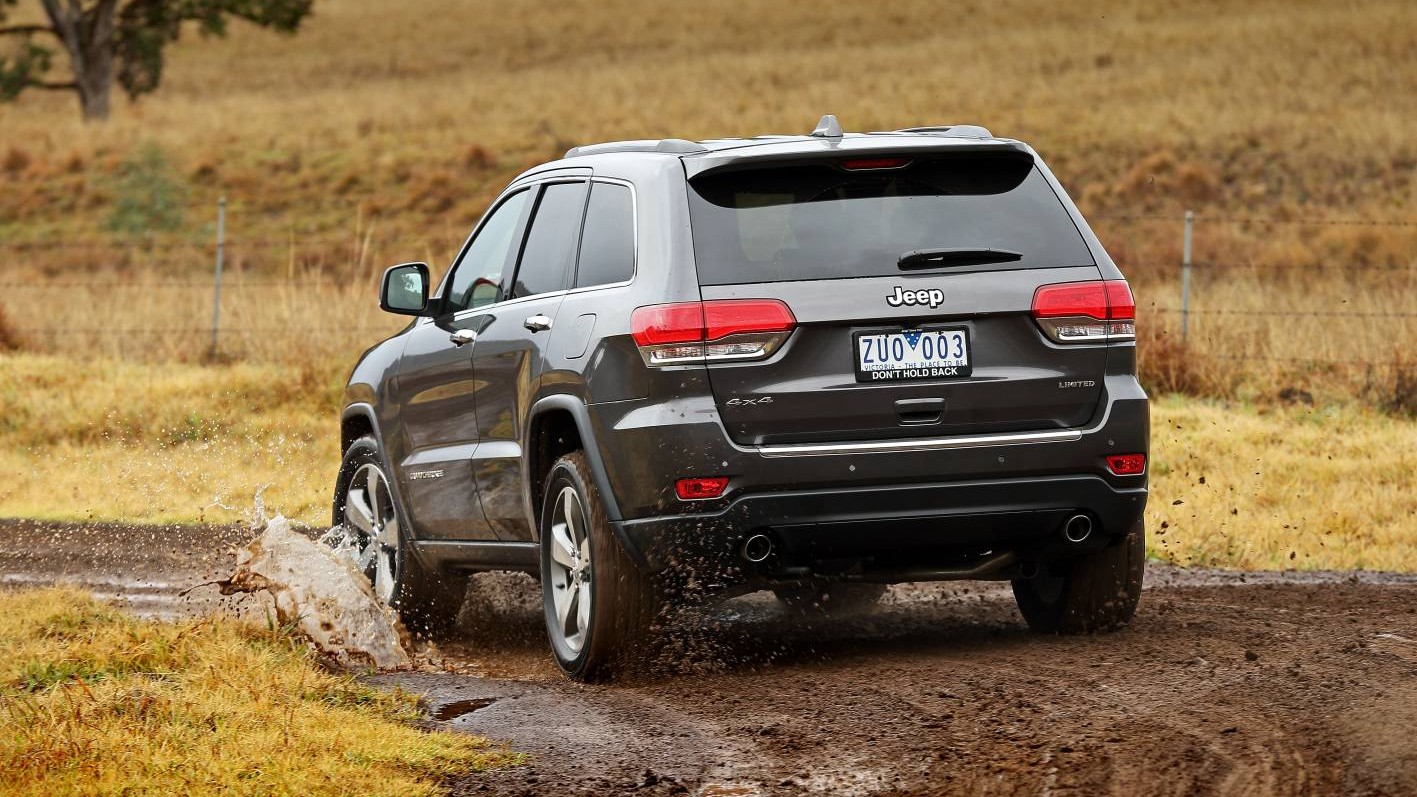