McLaren Automotive has revealed the Artura, an entirely new supercar that offers mental outright pace and 30km of emissions-free driving.

Underneath the 2021 McLaren Artura is an all-new platform which, as before, is made from lightweight carbon fibre.

McLaren’s new supercar will replace the current sports series while sitting below the track-focused super series like the 720S.

The new underpinnings are complemented by similar exterior design – the cab-forward design means you won’t mistake the Artura for another brand’s supercar.

Dihedral opening doors feature on the new sinewy supercar, perhaps not as beautiful as a Lamborghini Huracan, McLaren refers to the exterior design as “shrink-wrapped” and purposeful.

Cabin design has been updated with a focus on adjustability – the digital cluster and binnacle now move with the steering wheel adjustment. New bucket seats boast a full range of adjustment, which should suit a driver up to 193cm in true comfort.

At the push of a button, the car will go into track mode, showing only crucial information like rpm, speed and oil temp to the driver.

Despite the added technology which includes adaptive cruise control function, the Artura retains a relatively low kerb weight of 1,498kg.

As the Porsche 992 GT3 retained a link to the past with its naturally-aspirated flat-six, McLaren has persevered with hydraulically-assisted steering citing the extra road-feel this system offers the driver.

Unlike the GT3, there is an all-new twin-turbocharged three-litre V6 installed in the middle of the Artura. Combined with a 69kW electric motor, the Artura makes of 500kW of power and 720Nm of torque.

Traditionally passenger cars have used a 60-degree angle V6, but the Artura’s six-cylinders run at 120-degrees to each other. According to McLaren, this makes for a stiffer crankshaft allowing the engine to spin up to the 8,500rpm red-line repeatedly.

When you aren’t on a top speed run the 7.4kWh battery means the Artura can travel around 30km without producing any emissions. It has the added benefit of filling in torque to give the new Artura the sharpest throttle response of any McLaren product since the F1.

Adding the PHEV system allowed the all-new eight-speed dual-clutch transmission to be 40mm shorter overall, too, as the car does not require a physical reverse gear, that’s all up to the electric motor. Charging the battery to 80 per cent will take around 2.5 hours.

In quite a shift, McLaren has put an electronically-controlled limited-slip differential in the Artura when, like Lotus, McLaren had refused to use one in the past.

McLaren offers myriad drive modes that, like the Hyundai i30 N, are customisable giving the ability to choose soft dampers with sharp throttle response, for example.

Specially developed Pirelli P Zero Corsa tyres with ‘cyber tyre’ feature on the new Artura. The ‘cyber tyre’ chip inside each tyre feeds temperature and other data back into the stability control system, allowing it to compensate for the conditions.

The rubber is kept in contact with the road by an all-new rear suspension system that retains a double-wishbone upper set up but moves to two links for the lower portion with an extended toe-arm.

McLaren says the resulting system minimises toe and camber change under load, allowing the engineers to be more precise with geometry and reach their end goals of resisting understeer on corner exit and keeping the Artura stable during braking.

Naturally, braking is taken care of by carbon-ceramic discs clamped by aluminium calipers.

When the Artura arrives in Australia, expect it to start from around $450,000 before options. It will sit between the entry-level McLaren GT and sit below the 720S. 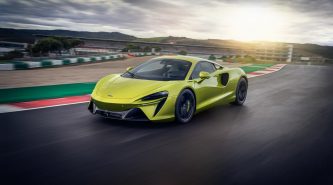 McLaren has not been sold to Audi, says the Woking firm 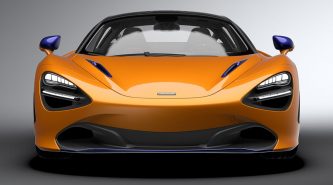