BMW’s latest 4 Series is further removed from the 3 Series sedan than ever before – it’s longer, lower and sharper to drive. But the styling of the new two-door will either suit your tastes, or make you feel ill 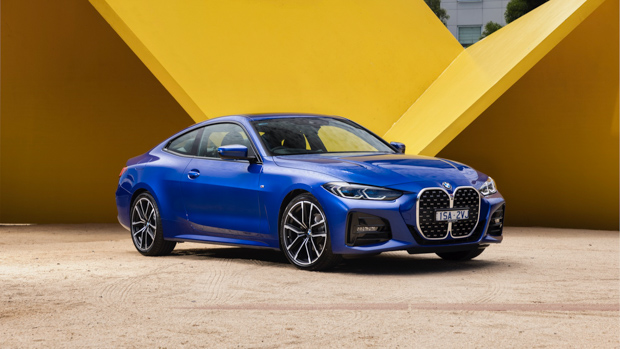 When BMW launched the ‘G20’ 3 Series in 2018, we christened it a return to form for the Bavarian brand. Elegant and restrained styling combined with driving poise you expect from BMW – it really sparkled. That’s how the marque has found itself in a bind, with a sedan so good that people might not buy the less practical 4 Series coupe.

So the team embarked on distinguishing the new 4 Series from the traditional 3 – we’ll circle back to the styling in a minute, but designer Chris Weil ignored 3 Series tropes for the exterior. The Coupe sits 57mm lower than the Sedan, has a different suspension set-up with chassis tweaks to make the two-door a wholly more emotive experience than the Sedan.

Australia only gets the three petrol engines, all of which Chasing Cars spent time in. From the base-model 420i which start from $70,900 before on-road costs to the range-topping $116,900 M440i xDrive, their characters are all remarkably similar on the road – something the engineers apparently strived for. 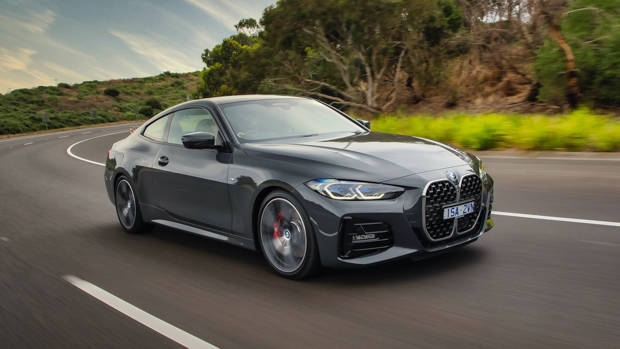 How does the 4 Series Coupe drive?

Prodding the start button results in a little disappointment with both the 420i and 430i. These are powered by turbocharged two-litre four-cylinder powertrains that respectively make 135kW/300Nm in the 420i and 190kW/400Nm in the 430i, adequate numbers even in the 420i, but ones that lack theatre with their grumbly tone. At least the throttle response across each engine is as sharp as a turbocharged motor can get.

The inline six-cylinder M440i solves this, the three-litre turbocharged motor bolts to life with more vigour, but marks quite a premium over the 430i. We hope there will be an M440i Pure edition that offers better value for money, as there is in the 3 Series range because the ‘B58’ is a real gem of a motor. No configuration comes close to a straight-six for its creamy note, and in Sport mode, the exhaust burbles enough to invigorate the pilot. 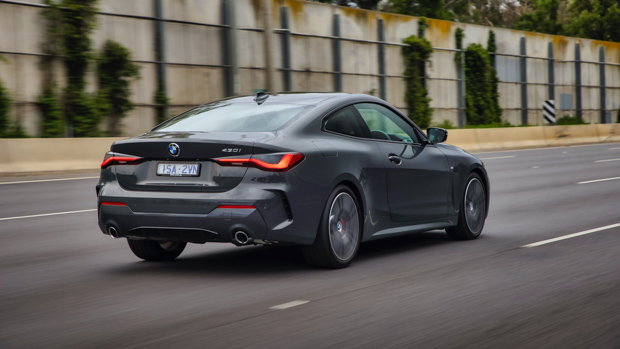 Every 4 Series variant utilises a ZF eight-speed automatic gearbox. BMW’s tuning renders the ‘box silky smooth and obedient to the paddle shifters, but without the machine gun snap Audi has achieved in the S5. Four-cylinder cars are rear-drive only with the 430i available with an LSD. As the name suggests, the M440i employs an xDrive system which means that all 285kW and 500Nm reach the ground for rapid launches, enough rear bias remains for on-throttle adjustment.

Changes to the chassis over the 3 Series have made a world of difference, where the adaptive dampers are nearly a must in the Sedan, the tuning of the passive set-up in the 420i is fantastic. Not too firm, nor too soft, it strikes an excellent balance for everyday use. Body roll is still evident but doesn’t obstruct progress, and the hydraulic bump stops give immense refinement towards the end of the stroke. Both the 430i and M440i are equipped with adaptive dampers, choose Comfort and body control relaxes compared to the passive tune, Sport hems things in a good chunk. Never is a 4 Series harsh, but Sport is firmer than pleasant on Sydney’s most awful roads. The middle adaptive setting strikes the best balance for this tester.

The lion’s share of Chasing Cars’ driving time was dedicated to the 430i, which BMW expects to account for around 40 per cent of Australian sales. You can feel how the revisions affect the car’s athleticism quickly; turn-in is a touch more eager than a 3, and the 4 feels more tied-down mid-corner. BMW re-tuned the steering system for the 4 Series, but the electric system remains numb and imprecise just off centre. Once loaded up, the familiarity grows, and the quick rack encourages you to slice through ribbons of tarmac ever-faster. 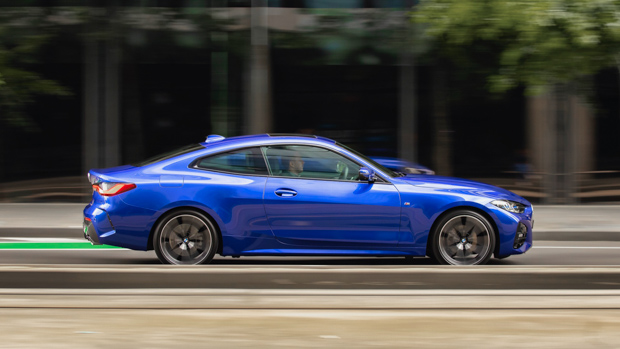 But the 430i Series does remind you that, despite an extra 1.5-degree negative camber, this is not an M car. When pushing harder, a whiff of understeer lets you know that the rubber is reaching its limit of adhesion. Be patient as the 430i to neutralises, and progress continues with a touch of attitude on exit. Our 430i tester was not equipped with the rear LSD included in the M Sport Plus Pack ($3,000), but we imagine it would improve the 430i’s poise further still.

While the 420i largely mirrors the 430i’s adjustable dynamic characteristics, the M440i feels more steadfast, more Audi-like. Our drive time in the M440i was more brief than the others, though, so we will reserve final comment for a full road-test shortly.

How is the 4 Series Coupe’s interior?

While the exterior is very different from the 3 Series, inside, it’s clear the 4 Series is genetically related. Sitting inside is the best place in the 4 Series, and the 430i Chasing Cars spent the most time in had a delightful spec with Tanzanite Blue paintwork over Oyster’ Vernasca’ leather. The premium exterior colour comes gratis with the vision pack, which also brings a sunroof, ambient lighting and smashing laser headlights for $6,300.

Our 430i was also fitted with the Comfort pack that includes Lumbar support and heating for the electrically adjustable sports seats ($2,080). It’s all great stuff, but gripes extend to a too-fat steering wheel and poor central cupholders, a tall bottle will interfere with otherwise easy-to-use climate control and shortcut buttons. 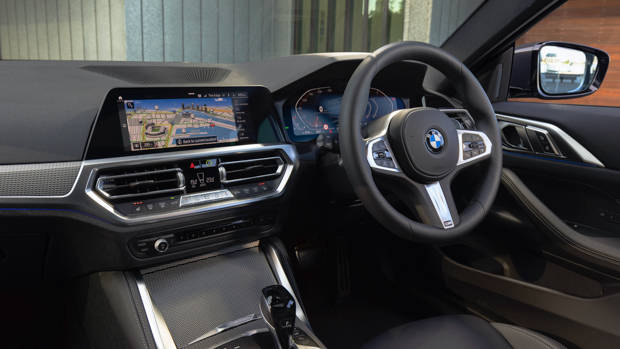 BMW’s design cabin architecture is restrained compared to the Audi A5 coupe and Mercedes-Benz C-Class, but you know what you’re getting. An excellent infotainment system with 10.25-inch touchscreen and rotary controller, wireless Apple CarPlay and Android Auto and a 12.3-inch digital dashboard.

Not best-in-class, but each control is precisely where you would expect. Quality is supreme, too, with soft-touch plastics everywhere. Opt for the extended leather package for total opulence. 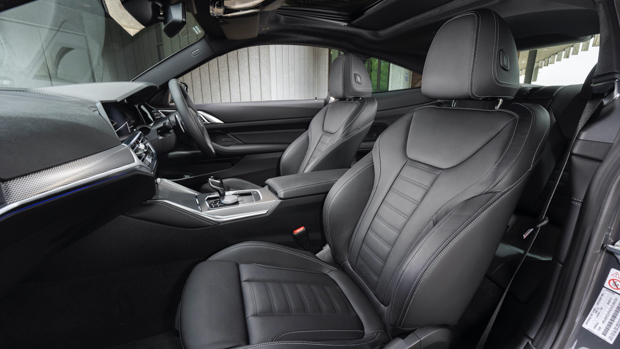 There is a generous dose of room in the front cabin, and visibility is respectable. Even the two rear seats are usable. Not for a long time for my six-foot-two frame, but I can just fit behind myself.

Those of more ‘normal’ proportions will find the well-bolstered buckets in the back supremely comfortable. Add to that a 465-litre cargo bay with power tailgate courtesy of the comfort pack, and this 430i ticks all the practicality boxes a Z4 doesn’t.

What are the 4 Series Coupe’s running costs?

Each model is equipped with a useful head-up display, reverse camera and front and rear parking sensors. The 430i adds a crystal clear 360-degree monitor, adaptive cruise control and lane-keep assist that turns with a single button press and holds speed in the way only a German could.

Above that, the 440i throws in the comfort and vision packs for its asking price. Needless to say, every 4 Series has AEB with pedestrian and cyclist detection, seven airbags and rear cross-traffic alert.

On a heavy-footed evaluation drive, the 430i simply sipped unleaded, returning 7.4L/100km over a 90km country run. Our run in the 420i involved plenty of efficient freeway trundling, and that car seriously impressed getting as low as 6.2L/100km.

In comparison, the 440i drank more petrol at 9.5L/100km on the same run, though that might be due to some traffic light launches and manually shifting to hear the six-cylinder burble – not bad in our books.

BMW’s warranty is, however, lagging behind the five years offered by Mercedes-Benz, it’s capped at just three-years. Servicing isn’t what you’d call ‘cheap’, but is affordable in the premium segment. 4 Series servicing is required conditionally, and BMW charges a total of $1,650 for five years/80,000km of maintenance carried out.

Beauty may be in the eye of the beholder, but the exterior of the 2021 BMW 4 Series doesn’t quite do it for this writer: it’s just trying too hard to be cooler than the 3 Series.

All the oily bits add up to a 9/10, but the styling – which cannot be ignored – moderates that score back down to 8. All that said, if the 4 Series exterior suits your taste, then the Coupe impresses with dynamic poise, steadfast road-holding and supreme cabin quality. 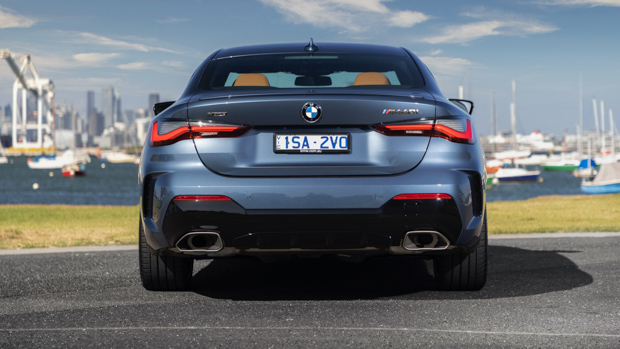 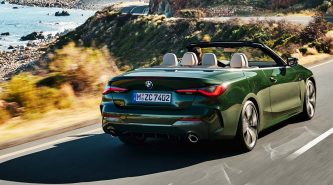 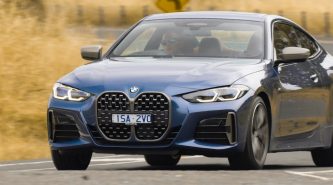 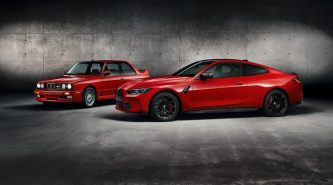 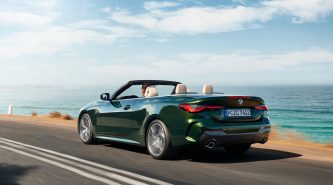 2021 BMW 4 Series loses its roof, due Downunder early next year 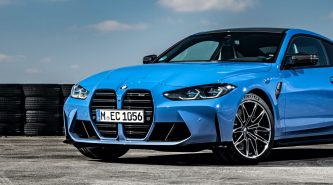 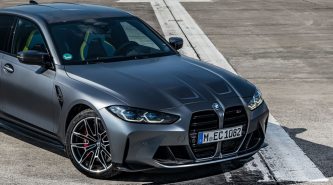 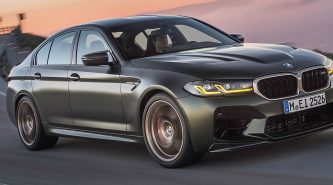 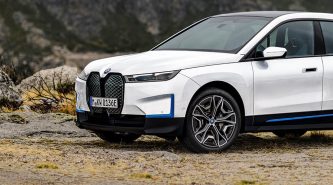 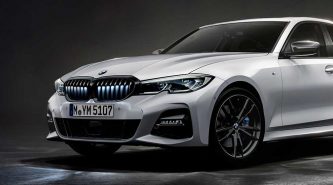 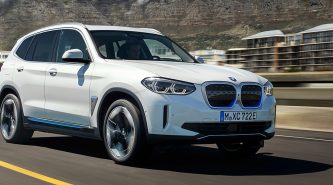 BMW Australia promises 25 electrified vehicles by 2023, with more than half to be BEVs 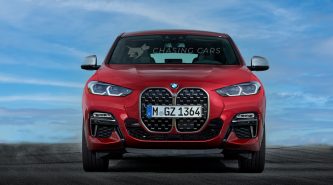 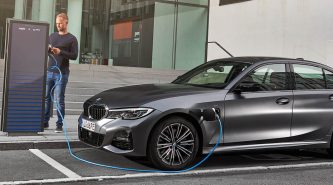