They may not be the last word in fun-to-drive dynamics, but Australians love Mitsubishi SUVs. Last year, the brand’s small SUV – the ASX – was the top-selling small SUV, while the Outlander achieved a top-five result in the medium SUV class. No doubt, both models were helped along by Mitsubishi’s equally strong reputation among fleet and private buyers. However, with a clear sizing gap between the city-sized ASX and the seven-seat Outlander, Mitsubishi are hoping to achieve a hat-trick in their crossover range. How’re they doing it? Basically, by forging a third SUV out of something old, something new, something borrowed, and something…red – in the form of the 2018 Mitsubishi Eclipse Cross.

What’s new? Many key mechanicals, for a start. The Eclipse Cross debuts Mitsubishi’s new 1.5-litre turbocharged, petrol four-cylinder engine, and a new continuously-variable automatic gearbox. There’s a bold look outside – and inside, the Eclipse Cross presents as more upmarket than either the ASX or Outlander. What’s old? Peel back the new sheetmetal and a number of links to the ASX are evident. Both the ASX and the new Eclipse Cross are built on Mitsubishi’s Project Global platform that also underpins the decade-old Lancer – and you can feel some of that age in the way the new model handles and rides. 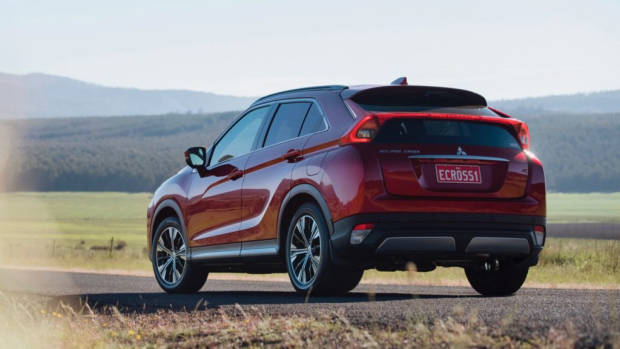 As for what’s borrowed, it’s all in the name. Many will recall the sporty, two-door Mitsubishi Eclipse coupe – it didn’t officially come to Australia, but the Eclipse accrued a formidable reputation in America’s car tuning scene and, like the Lancer Evo, is a memory from Mitsubishi’s ‘cool’ era, which it has now effectively abandoned – look no further than the Eclipse morphing into a small SUV. And, in terms of something red – that’s the hero colour, a hue called Red Diamond that at $890, sets you back $300 more than the other premium paint options. In the flesh, Red Diamond is particularly deep thanks to a specialised double-layering process; it’s similar to Mazda’s Soul Red.

Size-wise, the Eclipse Cross makes sense. A touch over 4.4 metres long, it’s four centimetres lengthier than an ASX, about the same size as a Nissan Qashqai, but shorter than a Hyundai Tucson – the latter two form part of the Eclipse Cross’s key rival set, joined by the Honda HR-V and Toyota C-HR. However, the ASX is undeniably a competitor, too, and it’s likely that the Eclipse Cross will cannibalise many of the ASX’s private sales, although big fleet operators like the rental car agencies are unlikely to ditch the ASX for the Eclipse Cross, if only on price. 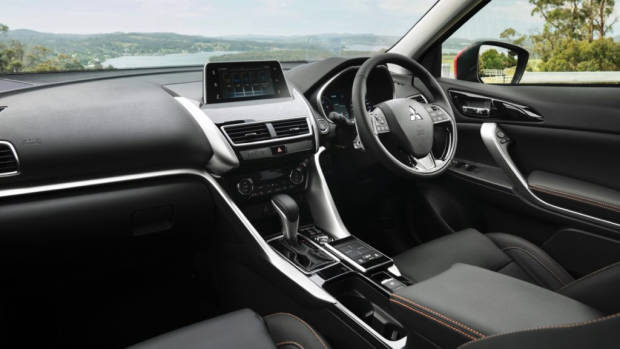 Where the ASX starts at $25,000, the Eclipse Cross is launching for the time being with only the mid-specification LS, priced at $30,500, and the flagship, $36,000 Exceed. That places the new Mitsubishi in hot competition with a number of well-regarded small SUVs: on paper, the Eclipse Cross looks expensive. However, both grades are well-specified: the LS introduces range-wide features like autonomous emergency braking, keyless entry and start, a 7-inch touchscreen with Apple CarPlay and Android Auto, DAB+ digital radio, automatic wipers and headlights, and 18-inch wheels.

The $5,500 leap to the Exceed brings a few luxe touches, including heated leather seats with power adjustment for the driver, a dual-pane sunroof, 360-degree parking camera and LED headlights, plus additional safety features in the form of adaptive cruise control, blind spot monitoring, rear-cross traffic alert, and a trick system to prevent accidental acceleration when there is an obstacle in front of the car. All-wheel-drive can be optioned to the Exceed for $2,500. 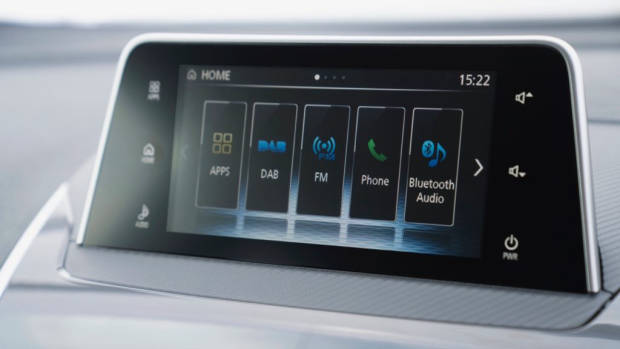 Heated leather seats aside, both grades share a quality interior fitout. The Eclipse Cross presents as significantly more upmarket than the ASX, thanks to broad use of soft-touch materials – the dashboard, door tops and primary touch points are all yielding. Small things, like the feel of the gear shifter moving through the boot, are far better damped in the Eclipse Cross, and although the driving position is too high-set, the seats are softer and relatively supportive. Only a few holdovers from Mitsubishi's parts bin can be found – namely, cheap-feeling indicator stalks and a trip computer that beeps generically, like a 1980s computer.

The technology on offer in the Eclipse Cross improves over the ASX, too. There’s a new, tablet-like touchscreen mounted high on the dash. It’s not dissimilar to that used in Hyundai and Kia products, but it’s wider and more elegant to look at. The software it uses isn’t bad, but most people will plug their phone in for Apple CarPlay and Android Auto – especially as there is no integrated navigation. Both grades get digital radio, though. You can either touch the screen, which works best, or use a trackpad between the seats that lacks the useful haptic feedback used in the Lexus system, which this appears to ape. 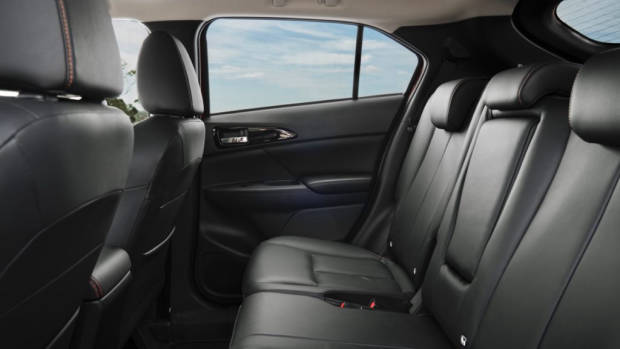 A sliding back seat means that either passenger room or cargo space can be maximised. At its most forward position, the bench only has enough legroom for kids but expands the boot to 448 litres from 341 litres with the back seats set far back – but that’s where you’ll want them if you have adults in the back, as legroom becomes generous. Headroom is acceptable, even with the Exceed’s dual pane sunroof. The lack of air vents or USB ports in the back is disappointing in any family car in 2018.

Both grades also feature a petrol engine that bests almost every other small SUV at this price point. The 1.5-litre turbocharged four-cylinder is the highlight of the Eclipse Cross: its Volkswagen-Golf matching outputs of 110kW of power (developed at 5,500rpm) and 250Nm of torque, available in a band between 2,000–3,500rpm, is a standout. The engine is refined and punchy – you can jump into traffic gaps in town and in the country, overtaking is quick and easy. The engine pairs well to the new CVT automatic, which no longer causes a din or feels elastic: CVTs with plenty of torque to work with make sense. The eight simulated ratios work well – the Eclipse Cross pretends to have a torque converter auto – and you can override gear selection by pulling classy metal paddles behind the steering wheel.

At the LS level – for about $30,000 give or take – key competitors generally offer anaemic naturally-aspirated four-cylinders, and the Eclipse Cross storms in with a significant torque advantages. Compare the Mitsubishi’s 110kW/250Nm engine to the rivals: the Nissan Qashqai 106kW/200Nm; the Honda HR-V 105kW/172Nm; and the Hyundai Tucson 121kW/203Nm. Only the Toyota C-HR is also turbocharged, but its 1.2-litre engine is only little, making 85kW/185Nm. 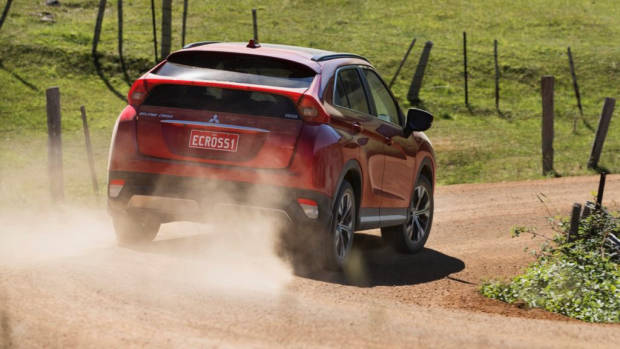 With either the two-wheel-drive or all-wheel-drive configuration, the Eclipse Cross’s engine and gearbox acquit themselves well. Few Australians will realistically need the top-shelf Exceed AWD, which nudges into dangerously expensive territory at $38,500, although the Lancer Evolution-derived Super All Wheel Control system is sophisticated and allocates power to the rear wheels rapidly. We drove the 2WD car down a hundred kilometres of dirt road, though and encountered no problems thanks to a well-tuned stability control programme that allowed a small amount of controlled slip.

Where the modern gives way to the old is in the Eclipse Cross’s other dynamic characteristics. The steering is accurate and well-weighted, but the chassis that underpins the whole package is feeling its ten-year-old age. Ultimately, the Eclipse Cross is less rigid than all-new rivals like the Toyota C-HR, and you feel that in the flex and roll generated when you take a corner fast in the Mitsubishi. The Eclipse Cross leans on its Toyo Proxes tyres too much – this is quality rubber, but with a worse tyre, the handling won’t be as secure as it should be. A terse ride at low speed improves with some pace aboard, but once again, the lush C-HR schools the Eclipse Cross here. A relatively quiet cabin is, however, a positive. 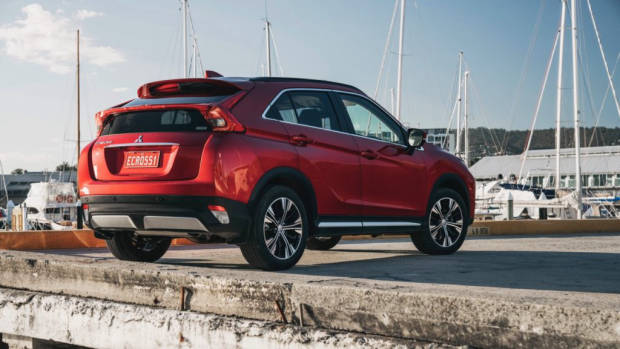 With most likely to simply pootle around town in the Eclipse Cross, the average handling is unlikely to put off that many buyers. What is more likely to is the price point. Later, a base model called the ES with a sub-$30,000 price will be launched, but for now, the cheapest way in – the $30,500 LS – simply looks expensive cast against this car’s rivals. That’s especially true of the Honda HR-V VTi-L ($33,340) and Toyota C-HR Koba ($33,290), which offer generous levels of kit for meaningfully less money than the Eclipse Cross Exceed – although those cars simply cannot match the Mitsubishi’s excellent 1.5-litre turbo engine.

Ultimately, the Mitsubishi Eclipse Cross presents as a decent choice among small SUVs. The size is right, the engine and gearbox are impressive, and although design is subjective, the bold looks make it more eye-catching than many of this car’s rivals. Ambitiously premium pricing aside, the Eclipse Cross’s main issue – dynamic ability when pushed hard – won’t matter to that many people, although it is something to bear in mind if you’re after an SUV that is sporty as well as practical. But if it’s an SUV with the triple-diamond badge you’re after, the Eclipse Cross is the best of the lot – and this is a car that shows Mitsubishi is moving in the right direction. 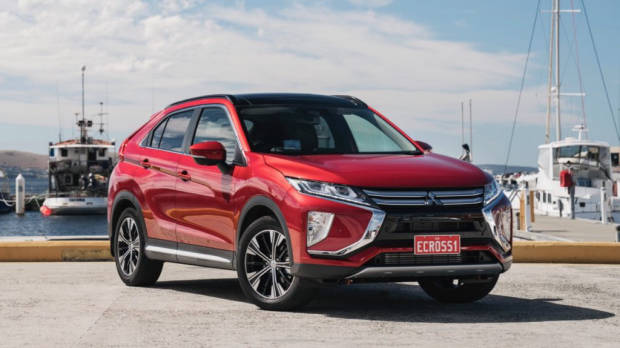