Make no mistake: the new Toyota RAV4 makes a quantum leap in dynamics over the model it replaces.

In recent years, Toyota have made significant gains in improving the dynamics, refinement and perceived quality of their vehicles. That’s reflected a change in the culture of this venerable Japanese brand, with their car-racing CEO ordering “no boring cars”. The new Corolla and Camry have stepped up: now, the 2019 Toyota RAV4 does the same. 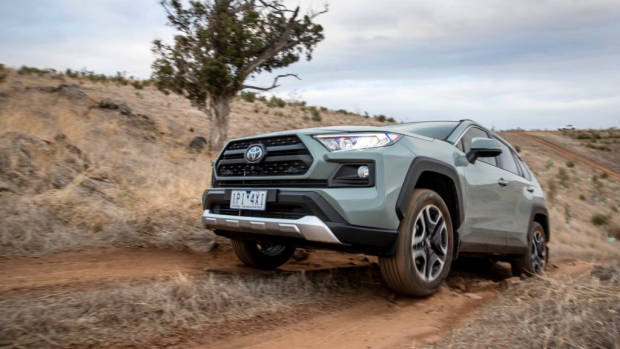 The fifth generation of the RAV4 launches in Australia this month, and we’ve driven the new RAV4 in all of its forms, which includes a broad spread of grades and powertrains. You can get the RAV4 with petrol or electrified hybrid engines, with 2WD or AWD, and in varying degrees of luxury.

In fact, the new RAV4 makes a concerted push on the Toyota hybrid front. Six of the available 11 grades utilise a powerful but efficient petrol-electric engine that endeared itself to us on our launch drive in the Adelaide Hills. 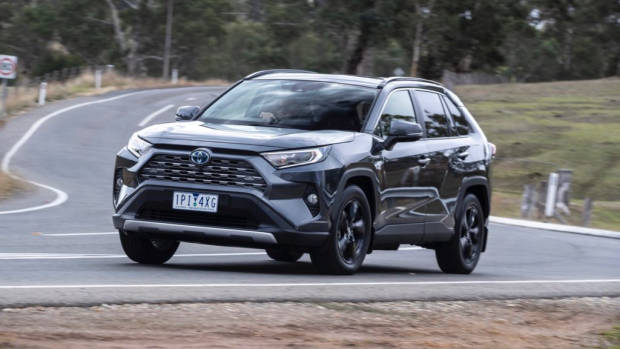 By combining a 2.5-litre naturally aspirated petrol engine with an electric motor and battery, hybrid models of the new RAV4 make a substantial 160kW (or 163kW in AWD, which adds an additional motor on the rear axle to drive the rear wheels) while total system torque feels to be around 300Nm – Toyota doesn’t quote an exact figure.

The hybrid is the most powerful engine in the new RAV4 range but it is also by far the most economical: the claim is 4.7L/100km and on a suburban run on launch, we managed to use less than 6L/100km without trying too hard. We’ll be assessing the real-world economy of the new RAV4 hybrid in detail, as we’ve picked up an example for a long-term assessment over the next three months.

Two standalone petrol engines are also available: the least expensive new RAV4s use the Corolla’s 2.0-litre naturally aspirated four-cylinder, making 127kW/203Nm. Those figures are sprightly in Toyota’s small hatchback but they feel modest in the RAV4. 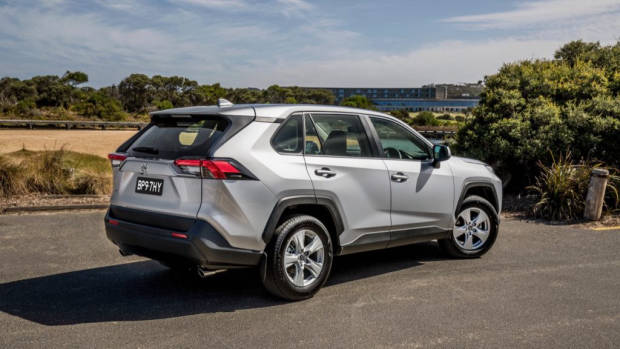 At the other end of the range, the adventure-focussed RAV4 Edge grade uses the same 2.5-litre petrol engine as the hybrid but with no electric assistance. Without the benefit of that instant electric torque, the Edge’s 152kW/243Nm petrol feels oddly lethargic on-road.

Toyota’s policy is that engines of 2.5-litres above and higher capacity score proper automatic gearboxes, though the eight-speed torque converter auto in the Edge doesn’t compete with Mazda autos for slickness. The CVT auto found in the hybrid model, and in the base two-litre, is totally fine, with decent refinement. 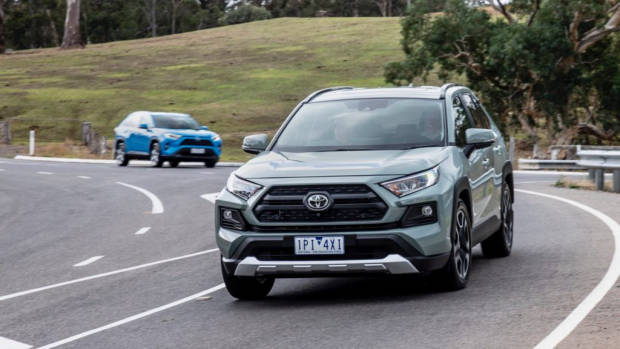 The hybrid’s the pick, then, but naturally, it does include paying a bit more. Choosing a hybrid with front-wheel-drive is a great way to get decent value from your upgrade, and that’s what we’d do. AWD requires a $3,000 upcharge, and unless you plan to take the RAV4 out bush or to the snow, you likely will not require all-paw grip.

We love the improvements in the RAV4’s ride and handling. The damping is subtle and well-judged, erring toward comfort rather than sport. The RAV4 traverses bumps and potholes in urban areas with little fuss entering the cabin, unlike some rivals. 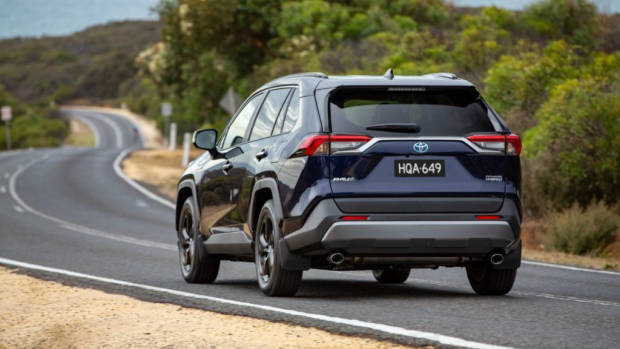 On a good backroad the RAV4 will also engage a good driver, though it isn’t as athletic or sporty as a Volkswagen Tiguan or a Mazda CX-5. The steering is neutral but well-weighted, quick enough, and the TNGA chassis is clearly well-sorted. Body lean is modest. Perhaps the biggest surprise is the grip level: the Bridestone Alenza tyres offer excellent traction, even in the wet, and the RAV4 always felt totally tied-down.

It’s immediately obvious that Toyota have considered how the RAV4 should look outside, and they’ve aimed right at rugged territory with the fifth-generation car. Since the first-gen Nissan X-Trail was dropped, most midsize SUVs have coalesced into hatch-like designs. Not the new RAV4: this is a little truck, with squared-off wheel arches and a pronounced, trucky front end. We like it! 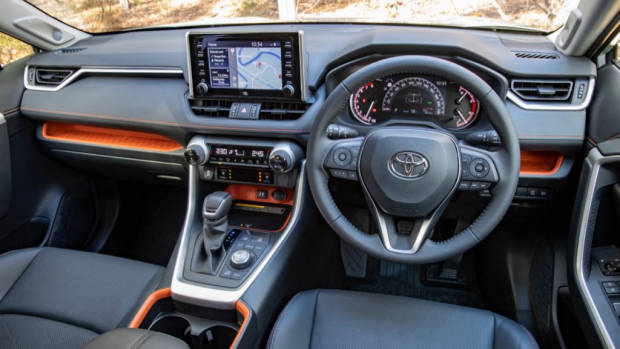 Inside, the RAV4’s interior steps up in design and quality, though this medium SUV does not hit the high highs of Toyota’s C-HR small crossover for interior finishes. For example, even the mid-specification RAV4 GXL (which can be as expensive as $41,140) gets completely hard door trims: that’s a shame. The posh Cruiser grade is the first to get soft materials on the doors. We also think the urethane steering wheel in the base model – which starts over thirty grand – is cheap.

With those complaints out of the way, there’s plenty to praise inside the RAV4. The seats are comfortable and supportive, and because they’re high-set and the windows are big, the view out is excellent. The dashboard layout is clear and attractive. The dials and switches are covered in a cool, rubberised design that makes the controls easy to find and use. 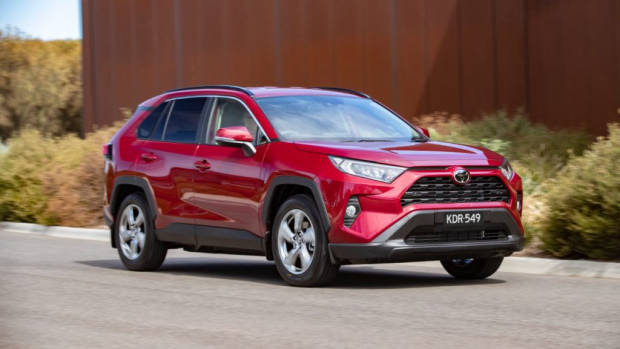 All RAV4s get the benefit of a crisp eight-inch touchscreen on the dash. It’s mounted in the driver’s line of sight like a tablet and offers standard DAB radio and navigation. Before Christmas, you’ll be able to get a free upgrade to Apple CarPlay and Android Auto. That’s a bit clunky: the 2019 RAV4 should be launching with smartphone tech, but at least it will be retrofittable when it does arrive.

Despite the fact the RAV4 is a touch shorter than the old car (when was the last time you heard about a car getting smaller – we like!), the wheelbase is longer and back-seat space is up. 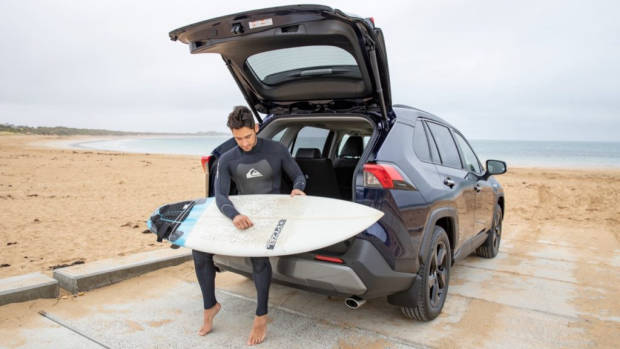 You can easily fit three adults in the second row of the new RAV4, and the standard inclusion of a folding armrest and air vents is appreciated in a big, hot country like Australia. Well done, Toyota! In most grades, there are two fast-charging USB ports in the back, too – and another two up front.

Cargo room has also increased, and the 580-litre boot is one of the largest in the medium SUV segment. The boot is a big, square space with no load lip, meaning you can slide suitcases straight in and out. Hybrid owners don’t lose out here, and the battery is mounted in a hollow area underneath the rear seats – smart. Toyota did miss the opportunity to include remote release latches for the folding rear seats, though, and there are no shopping bag hooks. As for choosing a spec, we’d give the base GX a miss thanks to a few mean interior bits – plastic wheel and shifter included, though it does ride well on small 17-inch wheels. The mid-spec GXL is something of a sweet spot aside from its hard door plastics: 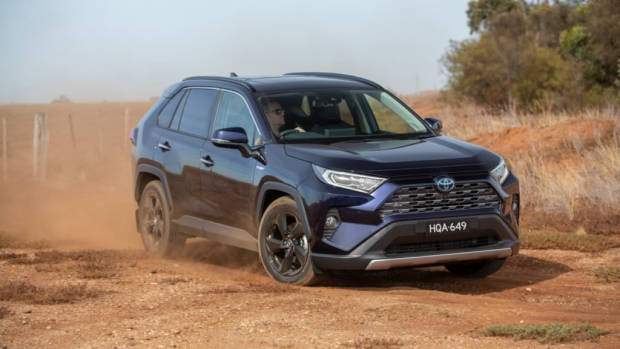 In our view, the best value is a front-drive Cruiser hybrid ($41,640) which scrapes in under forty grand but packs in the kind of toys you’d usually get for closer to fifty grand. Plus, it’s got the excellent hybrid engine meaning it will be quick but frugal.

You get all the soft-touch surfaces in the Cruiser, plus supple leather seats with heating in the front, available in black or caramel, power adjustment and memory for the driver, a sunroof, a digital driver’s display, and a power tailgate. In this spec, the Cruiser is genuinely great value as an impressively premium medium SUV. 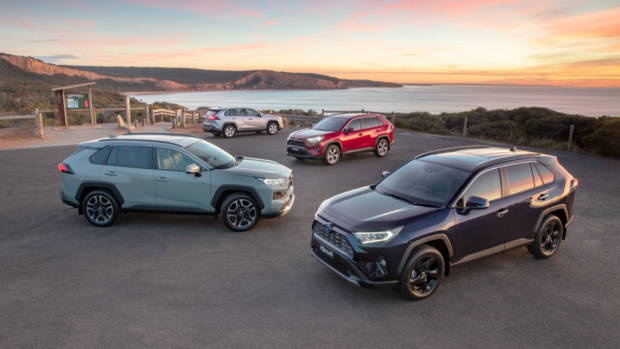 Ownership’s good, too, and not just because of the reliable image of the Toyota badge. The first five years of servicing are ludicrously cheap ($210 per annual/15,000km service) and there is now a five year warranty on Toyota cars in Australia with unlimited mileage for private buyers and 160,000km for business customers. If you go hybrid, the system is warranted for ten years if you take Toyota up on the free health check at the five year point.

All in all, it’s hard to poke holes in the argument of the new Toyota RAV4. If you’re looking to get into lower-emissions motoring, the frugal, powerful and good-to-drive RAV4 hybrid makes more sense than a Tiguan, CX-5 or Tucson.

Even putting the hybrid system aside, the RAV4 is now a properly desirable family SUV. It’s never struggled for sales as a fleet vehicle, but this is a car we wouldn’t mind in our own driveway. It rides well, it looks cool, and it’s great value to buy and to maintain. What more could you really want? 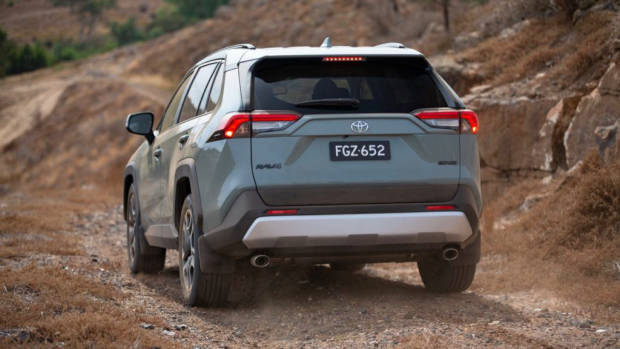