With higher demand than expected and the early makings of a cult following, the Hyundai i30 N is cracking skulls in the hot hatch market. So it’s a good time to introduce a unique second bodystyle, then. Enter the Hyundai i30 Fastback N.

It takes cojones to launch a car at Australia’s newest (and biggest) track. The Bend Motorsport Park, an hour’s brisk drive from Adelaide, is a wide, fast circuit not especially suited to nimble front-wheel-drive machines. But the i30 N has demanded to be taken seriously since well before it launched, in hatchback form, in 2018. Its new sibling, the sultrily-shaped Fastback, is no different in that regard. 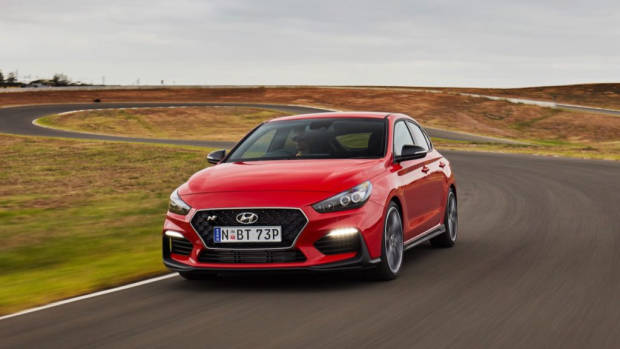 Straight off the bat, the i30 Fastback N is a real achievement because it improves the cracking i30 N recipe even further. The i30 N hatchback, which will continue to be offered, was no disappointment but the Fastback feels like an appropriate refinement with another year of critical learnings taken on board. It’s a little more balanced, a little better rounded, and even better to drive.

In no small way, we can chalk up responsibility for this car’s strengths to Hyundai’s crack engineering team in Australia. The key markets for the i30 N are Korea, Germany and right here, and substantial suspension tuning efforts have taken place for both shapes of the N car out of Hyundai’s Sydney skunkworks. So impressed were the European engineers who work on the N at Hyundai’s Nurburgring research facility that the Australian-led suspension characteristics – slightly softer, resulting in more balance, more rear-end involvement and better turn-in – will be adopted as the global tune for the i30 N hatchback at a mid-year facelift.

The Fastback already runs the global tune that is essentially the existing Australian hatch tune which has been unique in the world until now. At launch, the i30 N hatch in Europe ran a much firmer suspension tune that will essentially be backed away from in a future update. 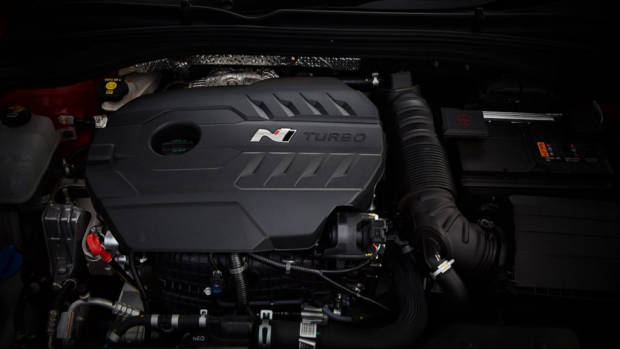 Judging by an extensive road drive of the new Fastback N through the Adelaide Hills and, of course, on track at The Bend, that’s a good thing. This is a broadly accomplished hot hatch turned into an appealing four-door coupe – and it’s $41,990. That’s a $1,500 premium over the hatch, which has ticked up by $500 due to exchange rate pressures. Both shapes remain bargains in the hot hatch space: a Golf GTI is $45,490.

The only i30 Ns offered in Australia run the global ‘Performance’ outputs: 202kW/353Nm extracted from a two-litre turbocharged four-cylinder engine. There’s a mechanical LSD on the front axle and the sole gearbox remains a six-speed manual with selectable rev matching. An eight-speed dual clutch automatic is coming. On the record, sources say the auto will be here by Christmas. We think it may tick over into 2020, in reality. More aerodynamic and slightly quicker than the hatch, the i30 Fastback N remains quick rather than fast in a straight line: the N does its best work attacking fast sweeper bends where its hard-charging limited slip diff can do its very best work. The prodigious corner exit speeds are helped along by the bespoke Pirelli P Zero HN rubber that the Fastback and Hatch pair both wear. Higher-end Pirelli Trofeo tyres remain in the accessory catalogue.

The Fastback shares much of its character with the hatch, including the conventional five-door’s solid, if not buttery smooth, steering feel. The Fastback’s turn-in is a bit more eager thanks to a marginal softening at the front end – the hatch will pick up this update later – but if you’re looking for superhatch reflexes, you’ll need a Honda Civic Type R. 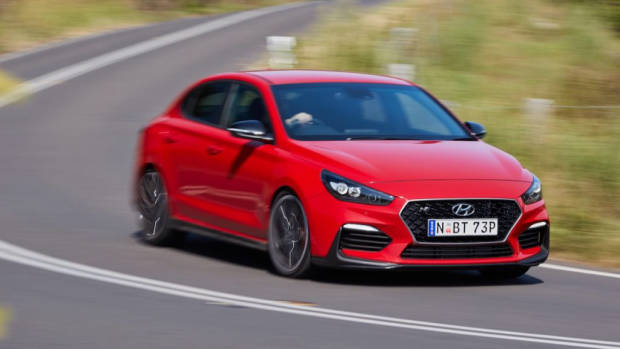 Like the hatch, the i30 Fastback N’s still a bit heavy for this class, tipping the scales at 1,490kg and blunting enjoyment somewhat at road speeds. Much like the i30 N hatch, to get the Fastback to feel playful on road you need to be driving at nine-tenths. Any less and it’s highly competent, but not frisky.

That being said, the Fastback’s modest weight gain of 12kg compared to the hatch is right where you’d want it: over the rear axle, leading to a shift in the weight balance to 40/60. While this is a two per cent difference at most, when you combine the shift in dynamic character of the balance change coupled to the front end modifications, you get a hot hatch more willing to lean on its outside rear tyre. 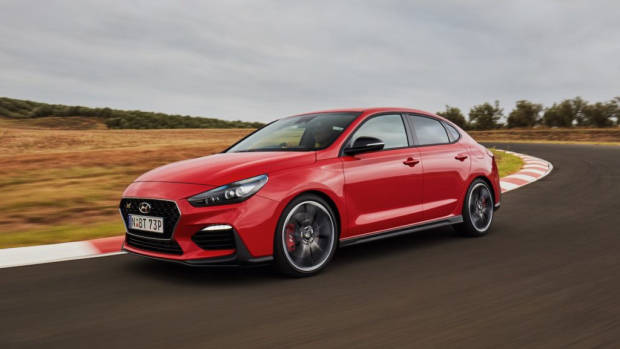 While I’ve always respected the achievement that is the i30 N, I’ve been critical of its balance in the past and am happy to report the Fastback goes quite some way to rectifying this. On road but especially on track, the Fastback is the better, and more engaging, vehicle to drive.

The Bend is full of long, high-speed corners, which the Fastback N was happy to attack all day long. Switch off ESC entirely and at track speeds, it becomes child’s play to kick the back end out and engage in long powerslides, FWD style – as I found out with the 270-degree rotation you can watch in the video above. 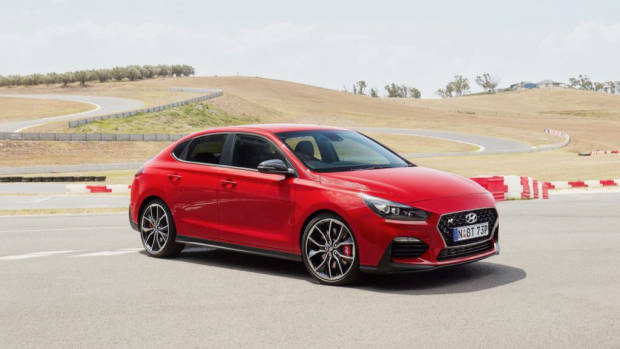 Turn-in is now really quite sharp and while there is some initial understeer, mashing the loud pedal is sufficient to rein things in. The limited-slip diff is seriously tractable and pulls the nose back to the desired angle – it really works wonders.

Then there’s the exhaust: just like the hatch, the i30 Fastback N has a three-mode exhaust package that can either be sedate (in Normal mode), a little louder (in Sport) or properly antisocial in Sport Plus, with a tonne of snap, crackle and pop on demand. Hyundai ought to be commended for the durability of the stock tyre and brake package, though by the end of a five-hour session at The Bend, the cars were beginning to feel like they needed a rest. That hadn’t been the case with the hatch at Winton – a far smaller, slower and more compact track – but we also had Trofeos and accessory brake pads and ducts to play with a year ago.

It remains highly respectable that Hyundai cover non-competitive track use under warranty for both shapes of i30 N. If I owned this car – especially the better-driving Fastback – I’d have to track them. Other hot hatches ultimately do on-road verve better, but as a car that can happily put track days under its belt while offering an entirely comfortable commuting experience, the i30 N is currently unbeatable. 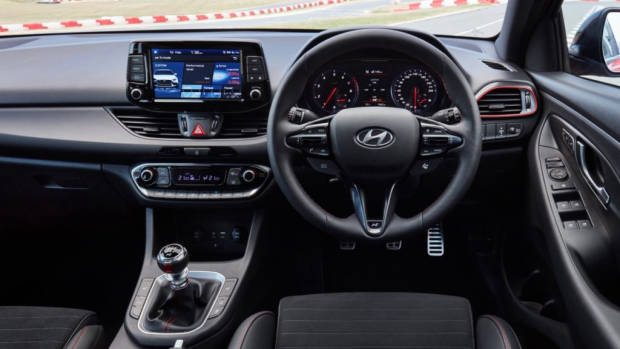 The cabin of the Fastback mirrors that of the i30 N hatch, with the exception of some colour detailing. The Performance Blue buttons and stitching of the hatch are gone, replaced by red details. Oddly, the bright drive mode buttons from the standard N turn to grey in the Fastback – boring. Thankfully, their function remains the same.

By way of the standard eight-inch touchscreen (with nav, digital radio, CarPlay and Android Auto, by the way) you can completely customise the dynamic experience, with engine, rev matching, steering, damping, LSD and stability control settings offering various degrees of aggression. 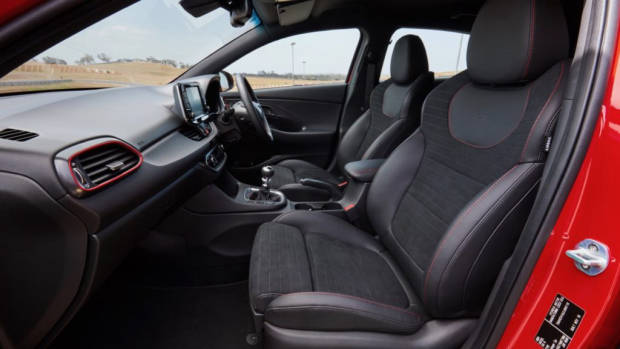 Sports seats are standard and comfortable, finished in either cloth in the base car or a mix of leather and suede effect in the $3,000-dearer Luxury package, which also brings front seat heating and power adjustment, a smart key, and wireless charging. A panoramic sunroof is also available on Luxury variants for a $2,000 premium. Adds weight, though.

Room in the back of the Fastback is fine – six footers still have (just) enough headroom despite the coupe-esque roofline. Legroom is good but toeroom beneath the beefy front sports seats is woeful. Rear air vents remain missing in action, but that’s because of the assembly for the manual handbrake that we assume owners are glad to have. 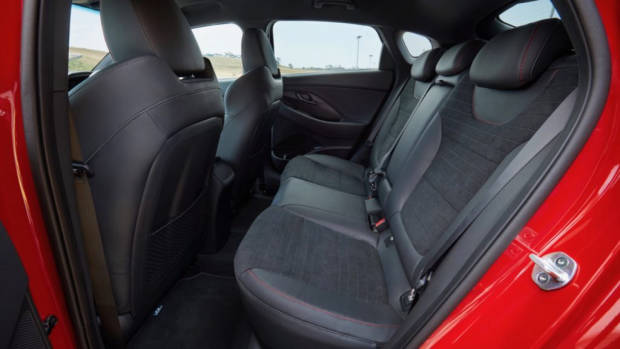 The boot’s bigger than the hatch, too – meaningfully up about 14 per cent, to 436 litres. The larger tailgate means that actually getting stuff in and out of the cargo area’s a bit easier, as well, though the steep load lip doesn’t help.

Ownership credentials are good in any Hyundai, and the i30 Fastback N picks up the same five year, unlimited kilometre warranty as the rest of the range. That warranty applies for non-competitive track use, too, while Hyundai’s lifetime service programme applies. The first five years of servicing cost just $1,595 – outrageously affordable for a hot hatch.

So, we like the i30 Fastback N – even more than the hatch that blew up the hot hatch segment last year. With further refinement of the suspension and better overall balance, the Fastback really is a better car to drive on road and track – at least until the i30 N hatch receives the same tune later this year. As for whether you like the varied body style – that’s subjective. For us, we do. This is a slick, slightly more mature variant of a high-quality, affordable, fun-to-drive sports car. 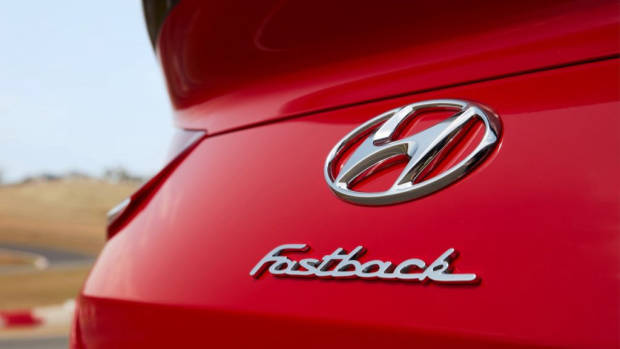