SUV dominance in the Australian new car market is nothing new – in fact, it’s been well publicised all over the media as SUVs of many different types are everywhere. So far in 2018, we’ve seen 377,824 SUVs sold here: almost 9 per cent growth year on year! Small SUvs may be in vogue but the real opportunity lies in pumping out seven-seaters: family cars that give dads and mums piece of mind that if they need to cart extra kids about, they can. Until now, Volkswagen haven’t had a three-row vehicle to offer in Australia – not until the new Tiguan Allspace came onto the scene earlier this year. Tom reviewed the Allspace on launch – but as usual, we learn more from detailed testing of our own, so we subjected a top-shelf, 2019 Volkswagen Tiguan Allspace 162TSI R-Line to more detailed testing.

So, what’s an Allspace? Developed simultaneously with the ‘short’ wheelbase Tiguan, the Mexican-made Allspace has arrived a little late to the party due to short supply globally – this is the only Tiguan the Americans get, and it’s proving popular there. Australia has finally started to receive its serve, though, filling a key gap in the local range for a three-row crossover. In fact, supply on the Allspace has been freed up to the point that you’ll have a shorter wait for the big one than for the existing, German-built five seater. 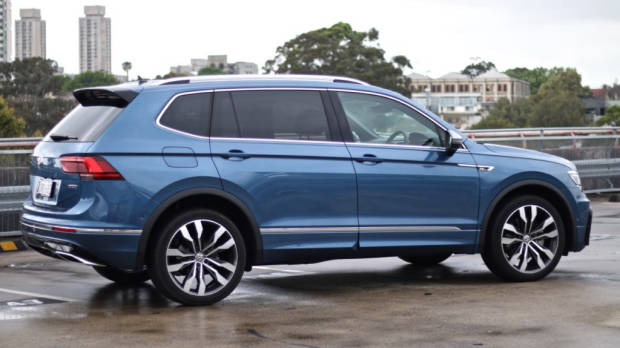 Thanks to WLTP emissions testing delays, there is also more choice in the Allspace lineup than in the standard Tiguan range, which has been felled from five variants to just two. The quintet is, however, available in the Allspace: two diesels and three petrols, all turbocharged. As a result, the Allspace is (temporarily) cheaper, despite being bigger and more functional. 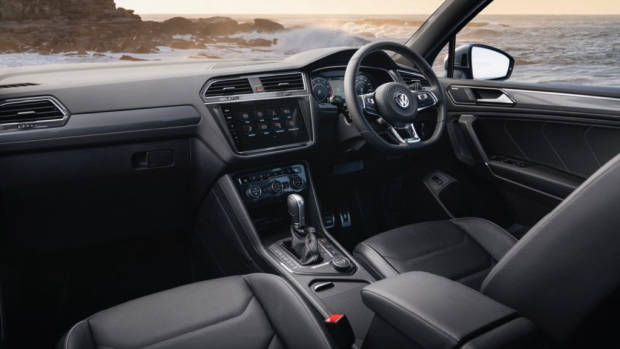 Each of the five variants has a distinctive engine but you’ll note there are only two distinct model grades: Comfortline and Highline. Each Comfortline model comes with 18-inch alloys, an 8-inch touchscreen with navigation, CarPlay and Android Auto, LED headlights, manual cloth seats, automated parking, a reversing camera and city-speed AEB. 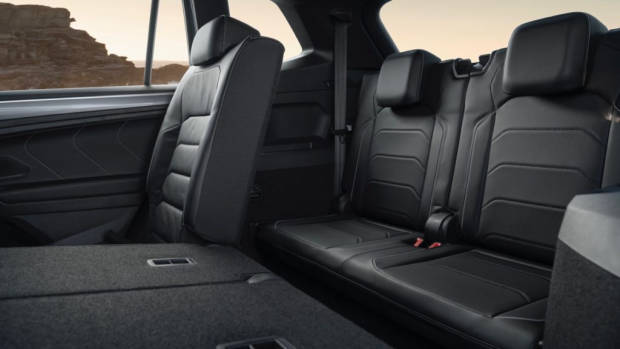 Simply buy a Highline model – the two higher-powered variants – and standard equipment increases to include the Driver Assistance package as standard, most items from the Comfortline’s Luxury Package (sans the sunroof, a $2,000 standalone option on Highline), two heated rear seats, a rear climate zone, as well as 19-inch wheels, a 9.2-inch touchscreen, and adaptive dampers. The Sound and Vision package ($3,000) is available here too; uniquely, the sporty R-Line package ($2,900) can be added to the Highline for a much meaner stance outside and a sportier steering wheel inside. 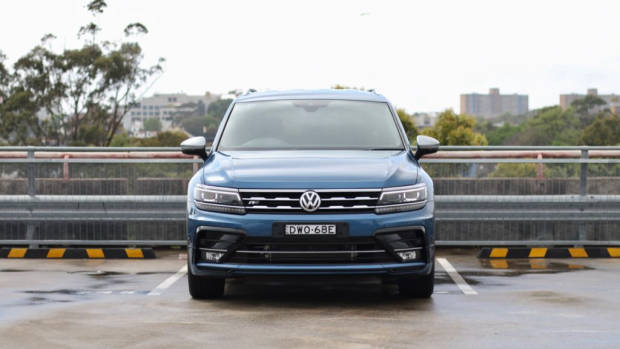 Our recommendation: keep it simple and grab a Highline – it’s definitely the model to go for in the Allspace range. Yes, it’s a $7,500 upcharge over the 132TSI Comfortline but as well as a choice of more powerful engines, standard kit is substantially improved as outlined above. Unoptioned, a Highline is still well equipped and hits the road at – currently – $58,802 for a 162TSI, or $60,377 for a 140TDI. Either way, that’s substantially cheaper than a Mazda CX-8 Asaki, which is diesel-only but currently costs $66,742 driveaway.

From a distance, the Allspace appears largely identical to the regular Tiguan; get closer and you notice the extra 109mm of wheelbase and the Allspace’s chamfered bonnet. Width and height are as good as unchanged but the Allspace gains 215mm in length over the 4486mm five-seater, so make sure you measure your garage. The standard Tiguan’s interior space was already commodious with a large boot measuring up to 615L and substantial legroom with the seats pushed back; the Allspace’s additional length takes this further. With five seats in place cargo capacity increases to 700L and with all three seats up, space is similar to the big Mazda CX-9 with 230L. 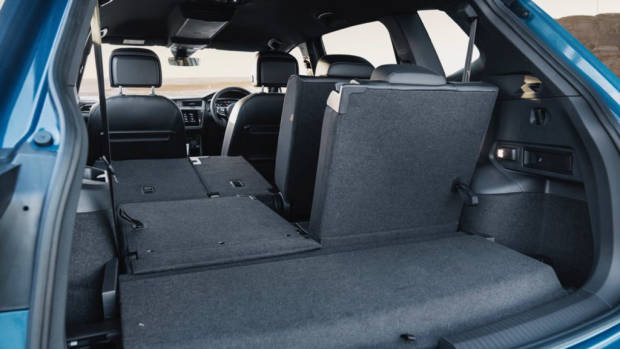 That said, the Tiguan’s seven-seater cousin from the Czech Republic – the Skoda Kodiaq – is even better again, with a larger boot with two seats in place. The Tiguan’s boot is not as clever as the Kodiaq either – a step up from the opening exists in the boot floor, and there is more space available in each row thanks to the Skoda’s extra length.

The Allspace’s third row is a kid-only zone. This 6’ tester did not fit either vertically or horizontally, so you’ll want to take your family along on the test drive to check the space. The lack of third-row ventilation is a problem, but at least the sixth and seventh passengers are covered by curtain airbags. 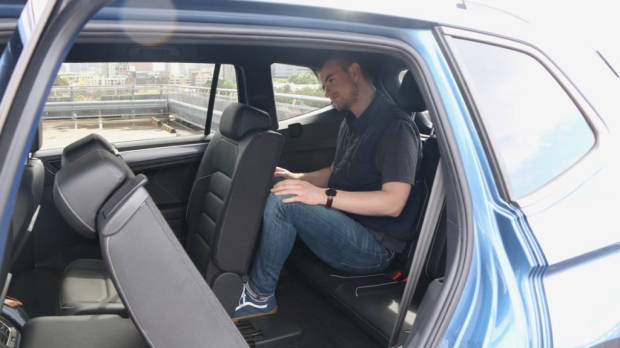 Adults struggle in the third row. The second row is much more spacious.

Accommodation in the second row is much better, with a reclining bench that also slides fore and aft to maximise legroom in five-seater mode. Second row vents are standard across the range, as are aeroplane-style tray tables, and the Highline delights with seat heating for the outboard pews.

Up front, you’re hard-pressed telling an Allspace apart from a standard Tiguan. We found quality to be identical … which is a good thing for consistency, but not so good in terms of providing a premium feel. Even the German-made Tiguan has relatively harsh materials for a Volkswagen, with too much use of hard plastic lower down on the dash. Once again, the Tiguan’s relation – the Kodiaq – is better in this regard, with a more welcoming and luxurious interior with greater use of plush materials. 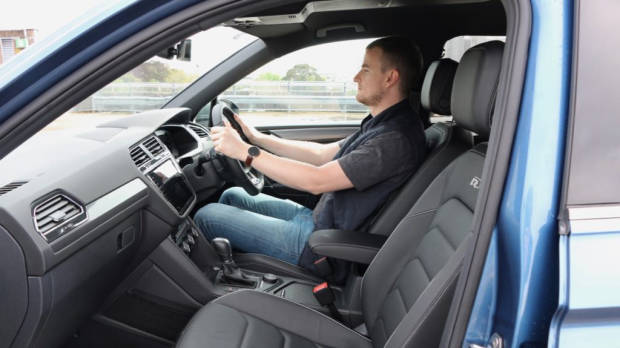 Tech is generous, though, especially in the Highline, which makes use of a crisp 9.2-inch Discover Pro touchscreen with navigation, CarPlay, and Android Auto – no DAB digital radio, though (you guessed it – Kodiaq gets that!). However, the big screen isn’t well-converted for right-hand-drive; the shortcut keys are located a big reach from the driver, on the left. Same story for the third row: the ‘easy’ access, where just a single seat is slid forward rather than the heavy dual-pair, isn’t located by the kerb. It’s on the right side, where you find the kerb in the USA or Europe.

We still don’t love the Tiguan’s MPV-like driving position. Even with the Highline’s electrically-adjustable seats, you feel like you’re feeling forward and the upward-inclined steering wheel, touchscreen and dash layout aren’t to our tastes. 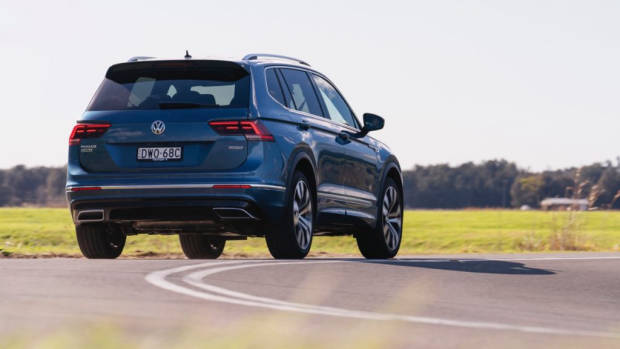 What is to our tastes is the way the Tiguan Allspace drives. Like its five-seat brother, the Allspace is engaging and fun to drive in a way few family SUVs are. Any of the five available engines offer plenty of go, and the Tiguan’s steering and handling is particularly enjoyable.

Until now, the only major problem with the Tiguan’s dynamics has been an overly firm ride. Not so anymore – at least not on the Highline, which gains adaptive dampers as standard (the R-Line has had them since the Tiguan II was introduced). On launch, Tom reported the 19-inch wheels rode well and even the R-Line on 20s is comfortable enough. The body control is good in either Comfort or Sport drive modes. 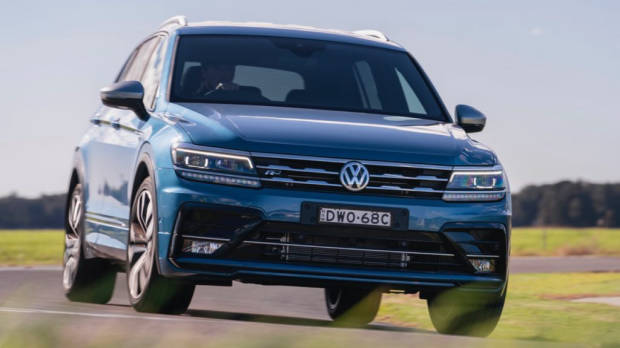 The Allspace does not lose the five-seater’s great steering or agile chassis, especially if you tick the R-Line box which ditches the standard Hankook tyres for superior Pirelli Scorpion Verdes which introduce better chemical grip into the mix. This gives the R-Line more traction in hard driving situations, something we appreciated in the pouring rain in Sydney the week we had the car.

The EA888 petrol engine in the 162TSI is a peach, too: effortlessly powerful, torquey and quick, despite the Allspace’s 130kg weight penalty. The caveat? Fuel economy. In our week of mostly urban driving – realistic for this kind of vehicle – we averaged almost 12L/100km. After a highway run things calmed down to 9.7L/100km but still, your running costs with that sort of drinking habit will be a little high. 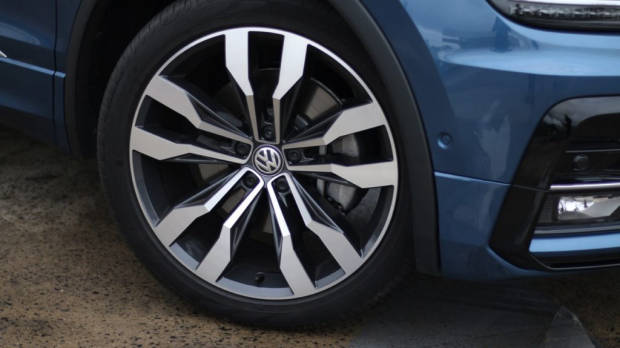 If you only need the five-seater we say go for the 162TSI – it’s a lovely thing – but in the bigger, heavier, thirstier Allspace, it’s actually the diesel Highline model that makes the most sense. The 140TDI has more torque and, as Tom reported on launch, delivers about 30% better economy at the minimum.

Overall, the 2019 Volkswagen Tiguan Allspace 162TSI is a sound addition to the VW family. What we liked in the regular Tiguan stays on in seven-seat form, and some things we didn’t like – the sharp ride quality and, at times, questionable value for money – have been improved in the Allspace. 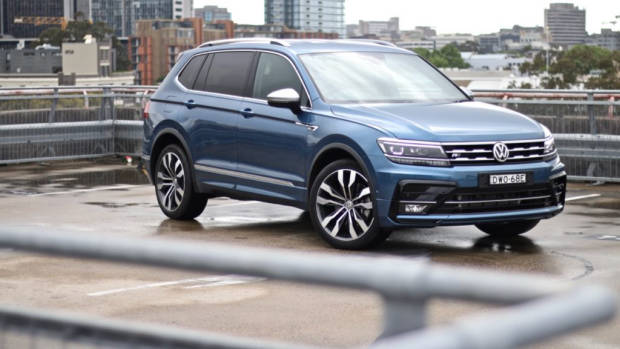 We appreciate the substantial choice of powertrain and value the inclusion of the lusty 162TSI petrol – even if our 140TDI-voting heads win over our heart here; it’s great to see a proper sporty petrol engine in a family SUV. However, if you’re into petrol family cars, we also commend the lovely Volkswagen Passat 206TSI wagon, if you aren’t tied down to the idea of an SUV.

Either way, though, Volkswagen increasingly has something to offer everybody. Time will tell, though, if the Tiguan Allspace is big enough, or if the even-larger Atlas will eventually be required for the Australian market. We suspect that it will be, sooner than what you might think.