The past decade has seen two clear trends emerge in the new car market locally: Australians love ‘premium’ products, and they love dual-cabs. The fact that it’s taken a relatively long time for high-end utes to emerge, coalescing both strands, is surprising – but expensive utes are happening, and the Toyota HiLux has become the latest model to join the above-$60,000 dual-cab club that also includes the Volkswagen Amarok, Ford Ranger, and Mercedes-Benz X-Class. Two new premium HiLux models are now available – a road-focussed Rogue and this all-terrain Rugged X. But while the Toyotas bring visual changes and off-roading mechanicals – in the Rugged X’s case – to the table, they do it without any change to the HiLux SR5’s 2.8-litre turbodiesel. So, does the HiLux make sense at this price?

Well, yes – and no. We travelled to the Flinders Ranges in South Australia to work this out, putting the new HiLux models through their paces in rural driving and in challenging off-road scenarios, with a particular emphasis on the Rugged X. What is certain is that the strong visual differentiation between the previous flagship HiLux, the SR5, and the new Rugged X, have helped matters by giving the Toyota ute a more serious, muscled stance – there’s real kerb appeal here. The pumped guards add a bit of width to this fairly narrow ute, while the heavy-duty steel front bar, which takes cues from last year’s HiLux Tonka concept, really looks the business. 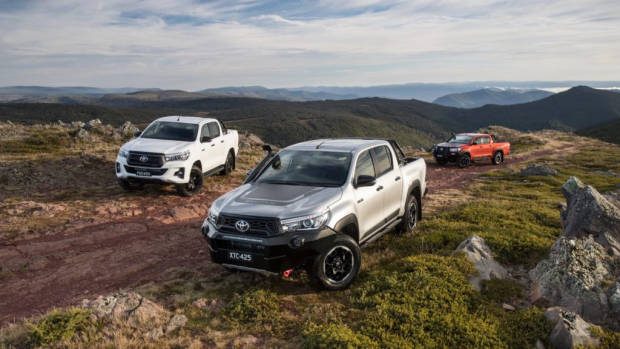 In recognition of Australian know-how with off-roading, Toyota Australia applies many of the Rugged X’s parts in Port Melbourne. The underlying HiLux – essentially an SR5 built in Thailand, stripped of its front and rear bars – is received by Toyota locally, where it is refitted with all the parts that make up a Rugged X: black steel front and rear bars, accompanying red recovery hooks, a 5mm silver alloy front bash plate, heavy-duty ARB-sourced rock rails, and a functional black sports bar in the tray capable of supporting a 200km tied-down weight.

Additional visual differences that set apart the Rugged X from an SR5 include the stencilled ‘TOYOTA’ script on the tray, matte black decaling on the bonnet, unique 17-inch wheels in all-terrain tyres, a snorkel, and an integrated, 120-watt, 24-bulb LED light bar and fogs in the front bar. Tougher? Yes – but plenty of Rugged X buyers will want to lift the vehicle and add even beefier tyres to just go that little bit further. It should sit higher. But for what it is – and given the average HiLux buyer spends north of $2,000 on accessories – the Rugged X is a pretty way to add some extra capability without much thinking. 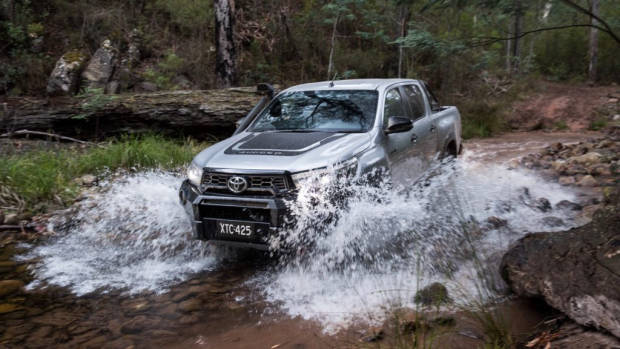 Not that it really needs that lift to be capable off-road: for most people, the HiLux Rugged X will be more than enough off the beaten track. Even at this standard ride height of 279mm, the new Rugged X front end has drastically improved this vehicle’s ability to tackle steep ascents. The approach angle is improved over the SR5, while the cornering approach angle of 49º – thanks to the huge exposure of the tyre by the front bar’s side cutouts – is quite astonishing. The front bash plate can take a real beating as we observed by digging the nose into the ground a few times – likewise, the black rock rails which require a huge impact to deform. All the accessories are integrated and attract the full factory warranty of 3 years and 100,000 kilometres.

It’s off tarmac where the HiLux Rugged X makes the most sense. On high-speed gravel roads the HiLux acquits itself well, with good stability and slow steering that reduces unwanted yaw. In the rough stuff, the Rugged X’s adaptations come to the fore, letting even amateur off-roaders – like me – tackle difficult terrain with ease. The four-wheel-drive system continues to be switchable on the fly by way of a rotary dial allowing selection of 2WD, plus high-range and low-range 4WD. There are six grab handles in the cab offering decent bracing for when the going gets tough. You sit high with commanding visibility over obstacles the Bridgestone Dueler A/T tyres crawl over without issue. It’s out here where the HiLux echoes Toyota’s hard-earned reputation for off-roading prowess and yes, it feels pretty unbreakable. 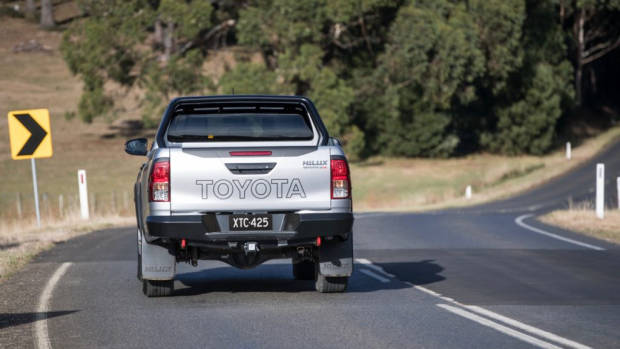 Back on the road, though, the Rugged X can’t escape the only average dynamics of the underlying donor car. The HiLux is fine to drive on tarmac, but nothing more. The engine, a 2.8-litre single-turbo four-cylinder diesel, makes 130kW of power and either 430Nm of torque with the six-speed manual, or a beefier 450Nm in the optional, $2,000 six-speed automatic. The diesel four is only adequate, noisy when revved out and not quick, though it is torquey and useful when crawling, especially in low-range, off-road. The automatic gearbox is not good, with poor software tuning resulting in constant gear hunting, with unnecessary downshifting making the engine roar. The six-speed manual, by contrast, is not only cheaper but is also better, with a fine clutch and throw and smoother downshifts thanks to a rev-matching system. Save your pennies and change gears yourself.

The slow steering ratio that makes the HiLux a better car off-road naturally hurts it on-road, where you need more than half-a-turn of lock before you start getting a meaningful change of direction, even at higher speeds. And, unlike in many passenger cars, the steering weight is not adjustable and the ratio is not progressive so you can’t change this. There’s plenty of body roll in the bends and the Duelers don’t love high speed cornering in any case. The HiLux wants to be driven gently on the blacktop, put simply. 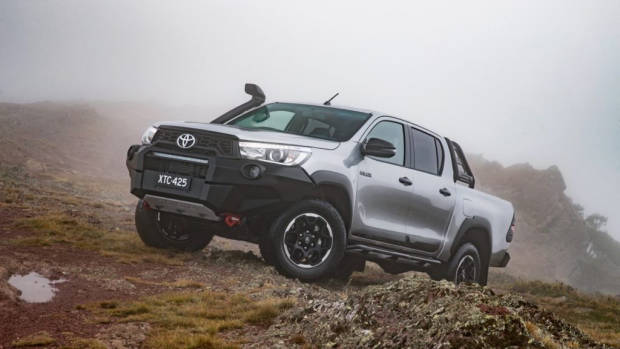 And then there’s the urban ride, which in all HiLuxes is very stiff especially at the coil-sprung rear end skips dramatically over road imperfections your eyes didn’t even see. This setup does grant good articulation, good load-bearing capability, and strong performance off-road – so you see the theme here. The HiLux is a commercial vehicle geared at commercial and off-roading uses. It’s not designed to mimic a comfy passenger car, so don’t expect it to if you buy one. If you’re after a refined on-road experience, you will be happier in a Ford Ranger, Volkswagen Amarok, or Nissan Navara.

Inside, Toyota have made a couple of alterations to the donor SR5, like a black headliner (that does lift the cabin over the staid grey number it replaces) and a new design for the dials. Perforated black leather seats, with heating in the front, are standard. The driver’s seat has eight-way electric adjustment, albeit without memory; the seat bases are quite short but at least with under-thigh adjustment you can achieve an acceptable driving position. The fact the Toyota’s steering wheel adjusts for both rake and reach remains oddly rare among utes. The eight-inch slate touchscreen still looks good; it has navigation and DAB radio, but not Apple CarPlay or Android Auto. 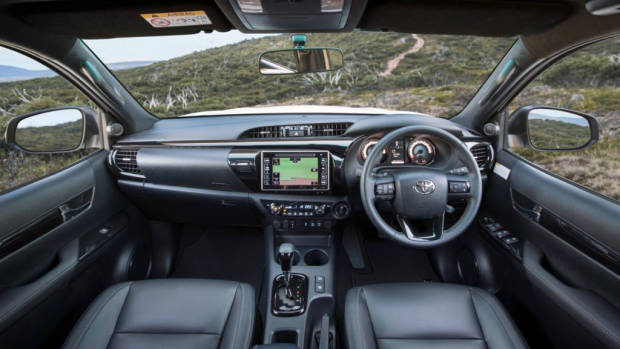 The back seat is more accommodating and comfortable than what you get in most of the HiLux’s rivals. The leather seats have some give; the back rest is more reclined than in an Amarok, and the seat base supports the legs more. Plus, there are air vents – again, not a common inclusion in this segment – to keep the air flow going to back seat passengers. Plus, unlike the Volkswagen Amarok, the HiLux does protect those sitting in the second row with curtain airbags.

While the basic tray dimensions of the HiLux SR5 carry over to these halo models – it’s 1,560mm long, 1,520mm wide (though it cannot take a standard pallet between the arches, a la Amarok), and 490mm deep – you do get goodies for the tub in the new trim grades. The Rogue gives you a hard tonneau cover on gas struts, with carpeting for the tub. The Rugged X exposes the tray by default but the tub is fitted with a moulded liner. And they all have a distinctive, macho black sports bar that can support a 75kg vertical load. 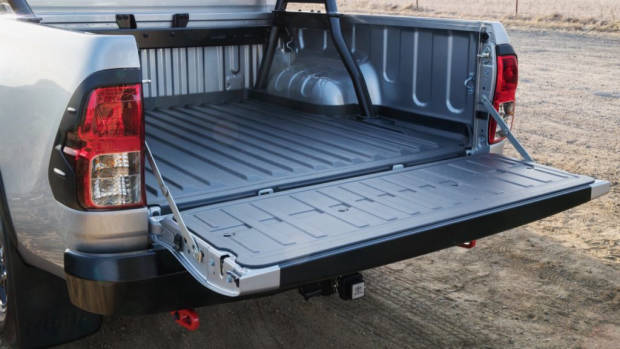 So, we think the new HiLux models – especially the Rugged X – are certainly visually differentiated to a strong degree to their regular range brethren, and that’s a good thing. The Rugged X especially looks and feels the part, with its tough decals, heavy duty steel front bar with integrated lighting, and beefier tyres. However, we do think Toyota should have taken this opportunity to give the HiLux a premium engine, either in the form of a V6 diesel, or simply by fitting twin-turbocharging to the existing 2.8-litre four. The 130kW engine here is simply too slow to compete with other higher-end utes that sport more power and torque.

And that’s why we won’t be surprised if, down the track, Toyota unveils an even higher specification of HiLux to more squarely compete with the most powerful versions of the Volkswagen Amarok and the forthcoming Mercedes-Benz X350d. After all, the HiLux is the nation’s best selling car, and Toyota will not want relative newcomers from Germany to soak up all the premium sales in this class. So, if you like the way the Rugged X looks, but you want more grunt and more luxury inside… we’d recommend watching this space. 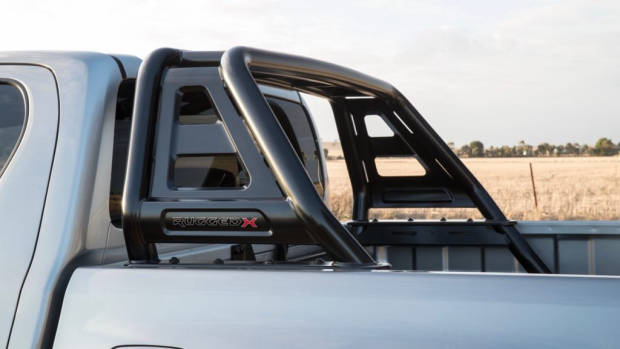