Quite possibly the coolest and least practical car to come out of Aston Martin in recent memory, the V12 Speedster is a love letter to its most successful racing car.

Aston Martin has commissioned an extremely limited run of a specialised model known as the V12 Speedster, which pays tribute to the Le Mans-winning DBR1.

Only 88 units of the V12 Speedster will be shipped worldwide, and while it will be manufactured in right-hand drive it sadly won’t be available to order in Australia.

The DBR1 is not only the inspiration for the well-known lineage of DB cars, but an incredible racer that claimed victory at both the Le Man and the 1,000km of Nürburgring in 1959, after winning the latter twice in 1957 and 1958.

Driven by the likes of Sir Stirling Moss and Carrol Shelby, the DBR1 also racked up victories at Spa Sportscar Race and Goodwood, cementing its place in motorsport history.

Wearing a similar appearance to the Vantage, the V12 Speedster discards the windscreen and divides the cabin in two, in an effort to imitate the original DBR1 in a modern style.

Sitting behind the driver is a small cab that lifts up to reveal a set of helmets, also finished in Aston Martin Racing Green, while the addition of white circles on the bonnet and doors act as the canvas for an official racing number.

The racing-inspired touches continue at the axles where the British automaker has fitted 21-inch centre-lock wheels which by themselves take 50 hours to complete their Satin black finish at the paint shop.

Like the name suggests, the V12 Speedster may look similar to a Vantage but it packs the huge 5.2-litre V12 twin-turbo engine from the DB11, developing a 515kW of power and 753Nm of torque.

Power is sent through a rear-mounted ZF eight-speed torque-converter automatic, which helps the car hook up for a 0-100km/h time of 3.4 seconds before hitting a top speed of 318km/h – though you may want to be wearing the helmet for the latter.

The setup is slightly more potent than the 3.0-litre straight-six engine and five-speed manual fitted to the DBR1 but with only 800kg to move the roadster still topped out at over 240km/h.

Aston Martin says each example of the V12 Speedster will be handbuilt at their factory Gaydon, England, with deliveries expected to take place midway through this year. 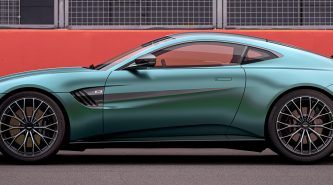 Aston Martin Vantage 2021: F1 Edition is the safety car you can buy 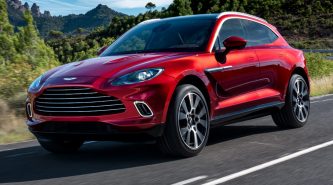