For the first time since Hyundai entered the Australian market in 1986 – thirty-three years ago – the South Korean brand will not offer buyers an entry-level light hatchback. In a sign of the times, Hyundai’s new starter car is an SUV. It’s called the Venue; it measures just 4.04 metres in length. The tallboy aesthetic conceals a well-packaged interior that sits on a smaller footprint than the Accent it replaces at the bottom of Hyundai’s range.

It isn’t just the Venue’s SUV form factor that is a sign of the times. In departing the light hatch segment that has hosted badges like Accent and Excel, Hyundai is also abandoning the super-cheap, sub-$20,000 price point that once defined this brand.

Instead, slotting in under the Kona, the attractively chunky Venue kicks off at $19,990 plus on-road costs – about $23,000 driveaway – for a package that, while basic, is far from spartan. That money buys a small SUV that includes a crisp eight-inch touchscreen with Apple CarPlay and Android Auto, forward collision warning, AEB with full braking that functions up to 60km/h, lane keep assist, tyre pressure monitoring, and a rear view camera. 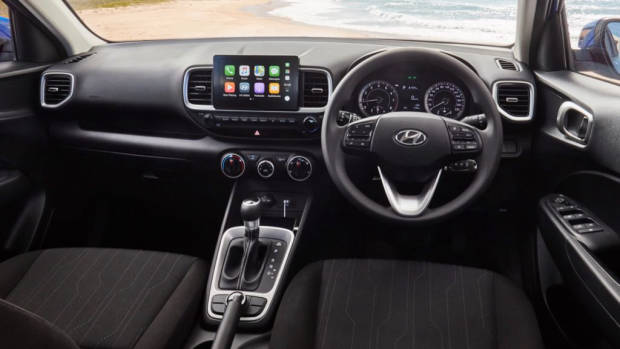 While there’s a cynical reason for adding modern safety tech to an entry car – government crash assessment programmes increasingly require it – these are meaningful inclusions, especially given that for many, the Venue will be their first car. Despite this, we note that the Venue is expected to achieve only a four-star rating in the Australian NCAP crash rating system.

However, including the sophisticated camera that powers these incident-detecting systems costs money and while the Venue’s interior doesn’t feel especially cheap, there are a number of places where the Venue betrays its roots in budget-car territory.

The 1.6-litre naturally aspirated four-cylinder petrol is one of those areas. Generously described as tried and tested, though more accurately characterised as outdated and carbon-inefficient, the Venue’s 1.6 MPi powertrain only just gets the job done. Buzzy and slow – this thing takes over ten seconds to get to 100km/h – the Venue deserved the one-litre turbocharged three-cylinder it is sold with in India. The 1.6-litre’s fuel consumption of 7.2L/100km with the automatic, and production of 165g/km of CO2, is just too high for such a small car. Thankfully, the disappointing engine is one of the only criticisms that can be levelled at where Hyundai have cut back on the Venue in order to afford to splash out on cabin and safety technology. As has become common with Hyundai, the Australian-spec Venue benefits from a very detailed ride and handling programme conducted on local roads.

The result is a small SUV that rides better than its rivals (limited) class that includes cars like the Mazda CX-3 and maybe the (larger) Honda HR-V. Hyundai’s Australian engineers rejected forty damper tunes before getting to the setup that was accepted. The Venue manages to be fairly supple, decently insulating front-seat occupants from bumps while never feeling floaty or insecure driven hard on a country road.

We say front-seat occupants because the Venue’s simple torsion-beam rear suspension – common at this price point – is a little unrefined, transmitting bumps more clearly into the second row. Like the torsion-bar equipped versions of the Hyundai i30 hatchback, the Venue’s rear suspension also creates a resonant echo over bad bumps. 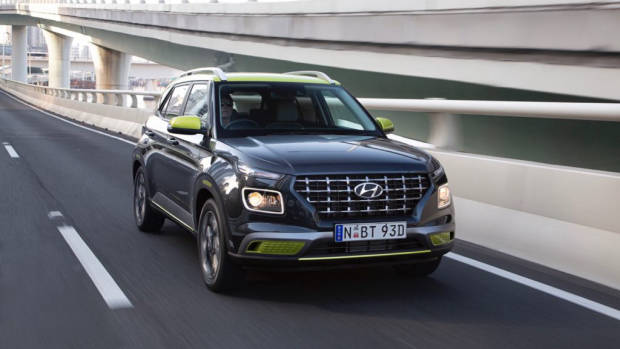 But that’s probably going to be of little concern to the people that buy this car: those looking for a fun first car, or an affordable little SUV to downsize into. The Venue’s relatively cheap – but it does feel like you’re getting more car than you pay for.

The steering is impressive, too, quicker than expected and pretty direct. The front end is agile, given there’s not too much weight over it, though turn-in is notably pointier in the Elite grade, which wears 17-inch wheels and better tyres.

That theme continues inside, where the Venue prioritises giving modern technology to every buyer of this SUV over less obvious stuff like soft-touch plastics. Each grade has the same fairly high-definition eight-inch touchscreen running Hyundai’s easy-to-use operating system – but Apple CarPlay and Android Auto are included, too, giving every car access to your phone’s inbuilt maps, audio options, and voice command. 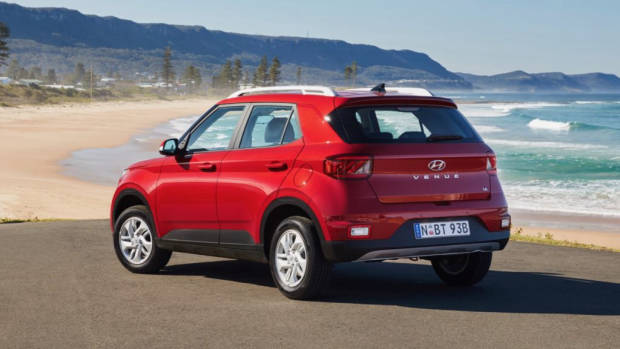 Only the top-shelf Elite, which costs $25,490 ($28,991 driveaway), scores integrated navigation and digital radio, but with a modern phone offering far greater versions of the same features, that really isn’t cause to upgrade.

The Elite does score a more customisable interior that includes a unique option of denim trim for the seats, plus contrast stitching and piping across several surfaces. 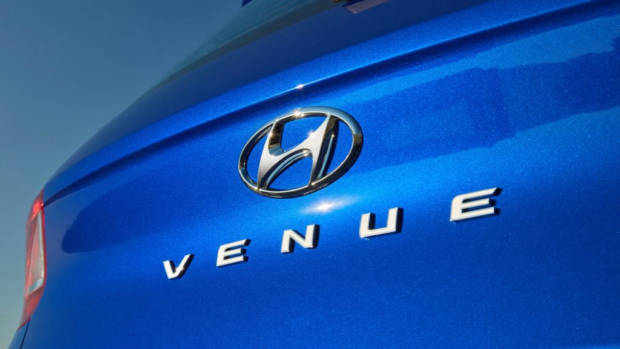 The seats are a bit less bolstered in the Go but there isn’t much in it – but on that note, the front seats in all variants lack adequate back support. For this tester, the Venue wasn’t very comfortable for extended periods of driving.

But as an urban runabout, it’s fine – and the clever storage spaces, clear instrumentation, decent driving position and relatively good visibility make the Venue easy to zip about in.

The back seats are big enough for adults, again, on shorter stints. Headroom’s no problem given this car’s tall, square roofline, but legroom for six-footers is a tight. The car’s four metres long – that it is this good is amazing. The tallboy styling again comes in handy in the boot, which measures 355 litres not because of length but sheer vertical space. 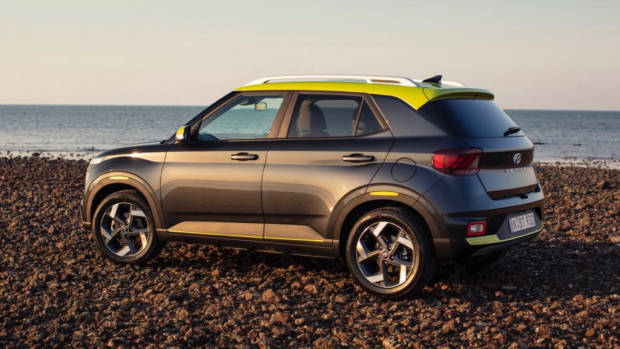 In terms of standard equipment, the Venue is cheap and cheerful at the entry level, while becoming progressively more expensive – and arguably worse value – the higher you climb.

The mid-spec Active is $1,500 spendier but steps up the equipment to include a leather steering wheel and shifter, rear parking sensors, six speakers, heated and power folding mirrors, contrast stitching on interior components, a centre console armrest, and LED daytime running lights. 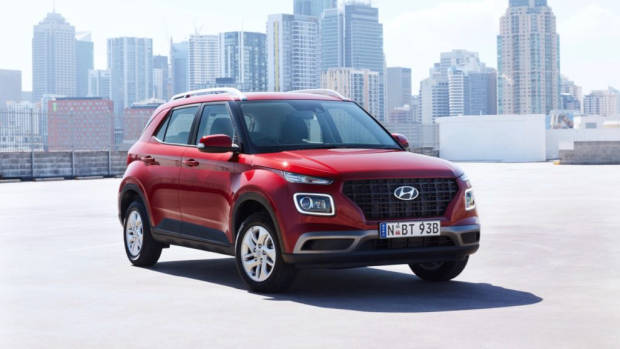 Ownership promises to be a typically simple affair, as with most Hyundai products. The Venue has a five year warranty with unlimited kilometres, while servicing is required at the first of annual or 15,000km intervals. The first five services in sequence cost $259, $259, $339, $459, and $259 for a five year cost of $1,575.

So, that’s the Hyundai Venue. In many ways, the aforementioned cliche cheap and cheerful really does describe this light SUV – if you restrain yourself to one of the better-value, less expensive trims, that is. With its resolved handling, smart tech inclusions, likely reliability and attractively chunky looks, there’s quite a bit to commend this new addition to the market. 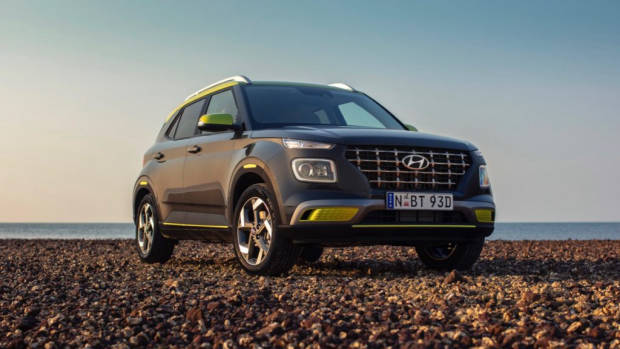