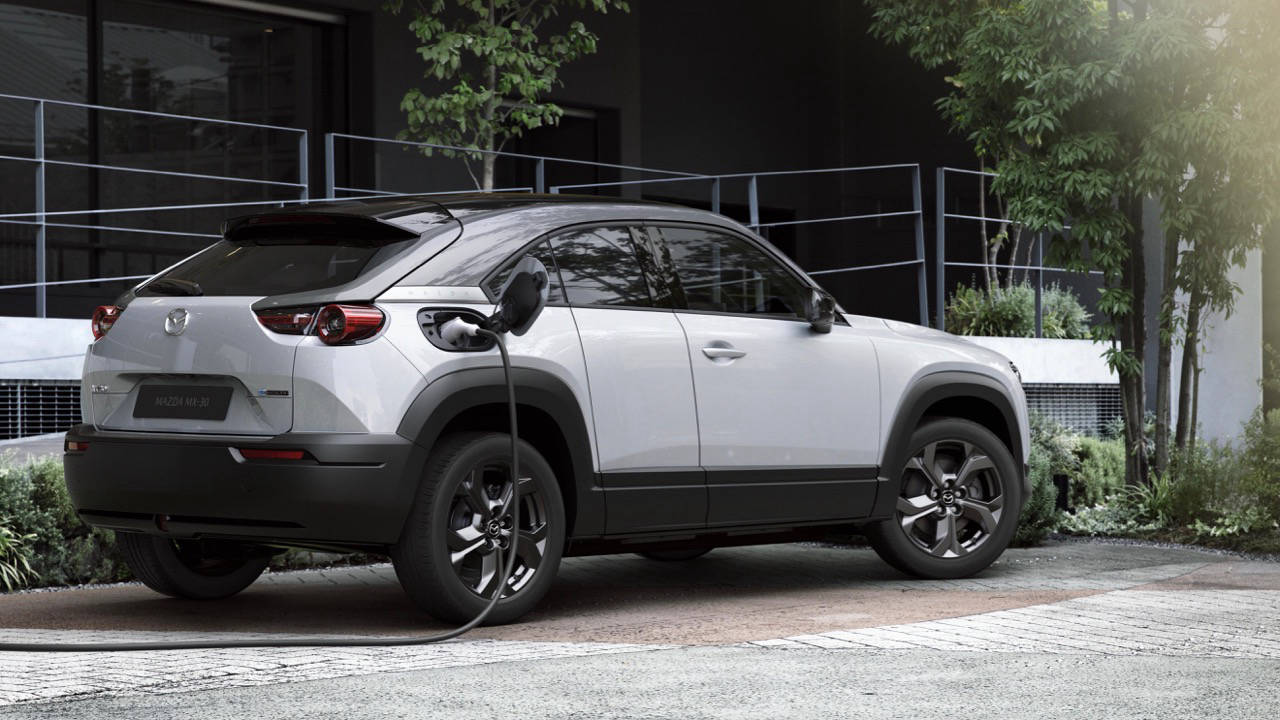 Mazda Australia cautious on EVs as debate heats up

Mazda has launched their plan for “sustainable zoom-zoom” in Australia, with the company targeting a goal of 50% reduction in emissions from ‘well-to-wheel’ – a perspective that takes into account all steps of vehicle production, from the first concepts to eventual disposal. Mazda say that different solutions will be required in different world markets – which means that full electric vehicles may not be considered appropriate for Australia at first.

We’ve heard plenty about this regional approach at a high level from Mazda, but the specific outcomes for Australian buyers are becoming clearer. We were present for the unveiling of Mazda’s first battery electric vehicle – the MX-30 SUV – this year, but senior product planners within the Japanese brand continue to debate the right time to bring the 250km-range EV to Australia.

Mazda’s approach is distinctly different to that of Toyota, which has slowly built up the profile of electric-hybrid vehicles in Australia over two decades. Fuel-sipping hybrid versions of the popular RAV4 SUV and Corolla small car use about half the fuel of their petrol-only siblings but cost little more to purchase. Mazda will dip a toe into the water of mild hybrid motoring in Australia next year with the release of the new Skyactiv-X petrol engine.

Mazda executives rightly point out that many hybrid Toyotas are pressed into fleet service, skewing the numbers, but there is little doubt that private buyers are becoming more aware of their carbon footprint. ‘Self-charging’ hybrids, as Toyota call them, allow an easy way to cut fuel use – and therefore CO2 emissions. Surely following this precedent would be an easy win for Mazda.

The brand has an answer for why they’re not going to do that – and it’s all down to well-to-wheel. With debate starting to pick up around the total emissions of electric vehicles – taking into account the emissions-intensive battery production process – there is a discussion to be had around comparable emissions of battery EVs and efficient combustion vehicles.

Controversy has brewed in the pages of the UK’s progressive Guardian newspaper in recent months with competing studies examining whether EVs add or subtract from improvements in the total emissions of vehicles on German roads. Germany is one of Europe’s more carbon-intense economies – but Australia is further behind that, with only 17% of energy generated from renewable sources.

But that is what well-to-wheel is all about. Mazda want to send appropriate vehicles with appropriate drivetrains to appropriate countries at appropriate times. In the case of full electric vehicles, the natural conclusion is only sending them to Australia en masse when their total emissions is comparable or better than an efficient combustion vehicle.

Now, obviously these numbers do not paint a full picture of EV emissions. Australia has a world-first takeup rate of household solar – and more powerful solar systems have the potential to charge a full EV off the grid, bringing charge and use emissions to zero. However, on the other side of the ledger, these numbers also do not factor in the emissions in building batteries, often in coal-powered factories, or extracting oil to power combustion vehicles.

It’s due to this current conjecture and confusion that Mazda Australia are holding their electric cards close to their chest. Marketing director Alastair Doak is guarded about Australia’s position in the overall well-to-wheel philosophy.

“You can be too early with these things – [and] then you have to do the heavy-lifting of education and infrastructure, or you can be too late and miss the boat – so you just want to be in that sweet-spot somewhere,” says Doak.

The diversity of opinions regarding Australia’s suitability for EVs is a major point of contrast in the automotive industry. For example, Hyundai Australia’s future mobility boss Scott Nargar told Chasing Cars last month that had Labor government been elected federally earlier in 2019, the government would have been much more progressive with funding infrastructure and altering market regulations to support the purchase of EVs in Australia.

In the minds of Nargar and other outspoken figures in the burgeoning local electrification space, there is a role for car importers in leaning on governments to alter the nature of the energy production mix – and a role in supporting major infrastructure stakeholders like Chargefox.

Mazda Australia’s managing director Vinesh Bhindi agrees that the federal government has to do its bit, noting that his philosophy is on the generation side – rather than simply bringing down the purchase price of EVs without making the energy network greener. “They need to focus more on the generation of renewable energy instead of incentivising private purchasing habits,” Bhindi argues.

There is no question that Mazda’s most senior powertrain bosses see the future as including a rich mix of electrified vehicles – but this Japanese brand does not agree that it is up to governments out outlaw combustion engine production. Cleaner energy production will benefit more than just the automotive industry too. In Mazda’s view, moving emissions from tailpipe to powerplant isn’t the answer.

Just because the BEV is facing conjecture and an uphill battle dealing with government policy in Australia, it doesn’t mean it’s the wrong way forward though in Mazda’s eyes, with Mr Doak adding that Mazda is “not ruling any [EVs] in or out at the moment, but they are available to us, and it’s our responsibility to make sure we have the appropriate powertrain at the appropriate time.”

In the meantime, the brand will continue to offer the engines that they see as a good fit in Australia, both from a business perspective and within their well-to-wheel philosophy. There are plenty of benefits from EVs as we know already, from providing cleaner city air to better NVH and weight distribution. Obviously, Mazda obviously know this – but with the current government’s slow push toward renewable energy, it’s hard to see a major acceleration of EV uptake in Australia in the medium term.

To contact the editor responsible for this story:
Email tom (at) chasingcars.com.au 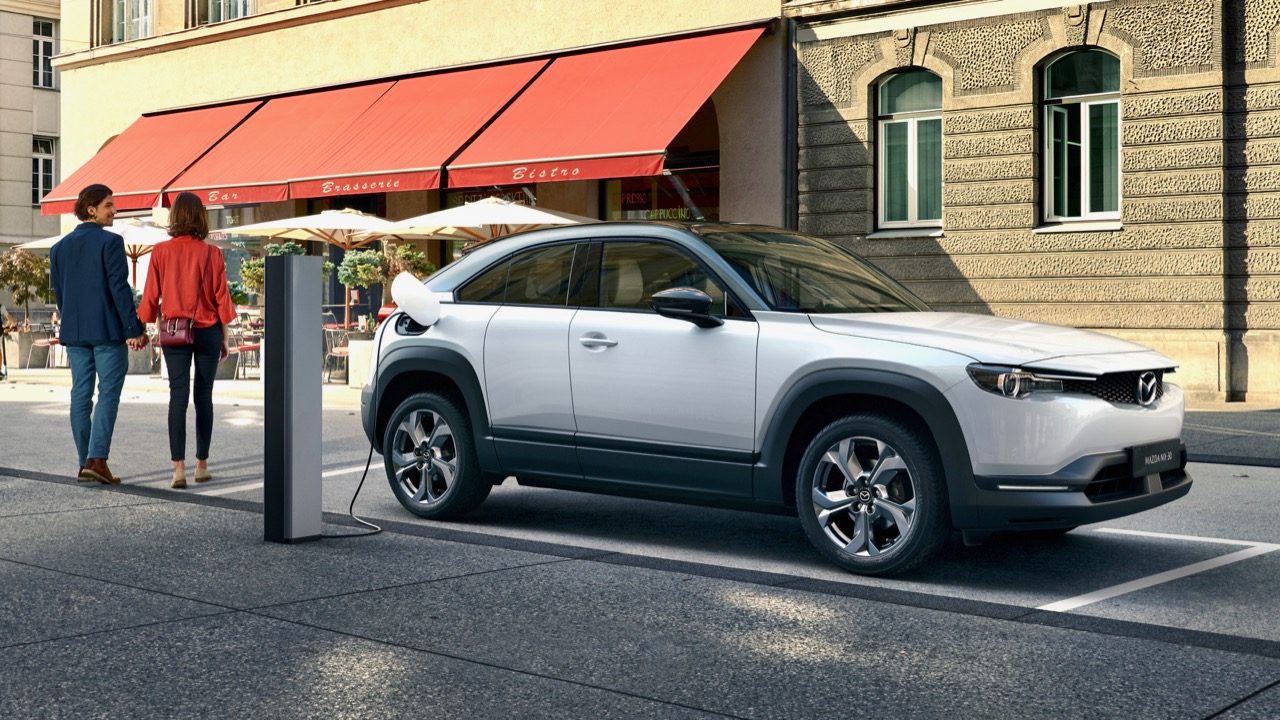 Japanese carmaker Mazda today revealed its first production electric vehicle. A full EV equipped with a 35.5-kilowatt-hour battery, the Mazda MX-30 arrives as a small SUV. Many pundits mooted that Mazda’s first battery electric vehicle would take the form of a crossover. Few would have expected the finished product to be as dramatic as the 2020 MX-30 is in the metal.

In a dramatic departure from Mazda’s curvaceous exterior design portfolio of the past decade, the boxy MX-30 is all sharp angles and creases. In a design flourish few will miss, the MX-30 sports suicide doors reminiscent of another bold Japanese SUV of this century, the Toyota FJ Cruiser.

But unlike that Toyota, the MX-30 – which utilises the letter code more commonly associated with Mazda’s sports cars – deploys an electric motor producing 105kW of power and 265Nm of torque. The MX-30 is the first in a series of Mazda electric vehicles. The company has set themselves a 2030 deadline for an ‘e-Skyactiv’ electric powertrain to be offered on every model in the Mazda lineup.

Delivering a range of around 250km in real world driving conditions, the MX-30 will be aimed at urban buyers seeking the versatility and practicality of an SUV with the zero tailpipe emissions advantages of an electric vehicle.

Chasing Cars drove a prototype of the MX-30’s drivetrain earlier this year – underneath the body of the combustion-engined CX-30 SUV, throwing us off the scent – and the experience is relatively unlike other electric vehicles.

MORE: Watch our review of the Mazda e-TPV with the MX-30’s powertrain

Designed to feel more linear and natural to drive than a Tesla Model 3 (review), Nissan Leaf (review) or Hyundai Kona Electric (review), Mazda intends for the MX-30 to help ease the transition into electrified motoring the the average buyer.

That said, the MX-30 is not destined for Australia at first, though a plug-in hybrid or conventional series hybrid version might. Underneath this SUV sits Mazda’s bespoke electric platform that is modular in nature and can accommodate self-charging hybrid, plug-in hybrid and full-electric powertrains.

Mazda’s ‘well-to-wheel’ philosophy dictates that if a market relies on non-renewable energy generation, the environmental benefits of a full EV rapidly diminish. This takes into account the substantial power and resource requirements needed in the production of the enormous batteries that go into electric cars.

Australia falls into the category of countries with only moderate supply of renewable energy in the national grid and as such, Mazda do not feel it is appropriate to deliver full-electric MX-30s in our country.

That said, the share of renewable energy as a portion of total production in Australia continues to climb and senior Mazda product planners will continue to assess their decision, making changes where necessary.

Mazda will pitch the MX-30 into European markets with fervour, where clean energy production is more plentiful. There’s also the substantial impact of the European Union’s punitive taxation regimes on combustion vehicles which grow ever more tight for carmakers and car buyers on the European continent.

Inside, the CX-30 embraces a number of sustainable materials, with high-quality cloth seats instead of leather trim. Secondary materials feature heritage cork in a throwback to past Mazda cabins as well as plastic surfacing made from recycled bottles.

Other cabin elements are reminiscent of other modern Mazdas – including the high-set infotainment screen also seen in the new Mazda 3 and CX-30 – but the MX-30 innovates by way of a seven-inch low-set screen for climate and other controls. Drawing on the strong power supply from the battery, the MX-30 will also feature a 150-watt household power socket in some markets. That said, USB-C ports are not present.

We expect to see the first MX-30 deliveries in Europe in late 2020, with a decision sometime next year about whether a version of this car – potentially a hybrid – will be brought to Australia.