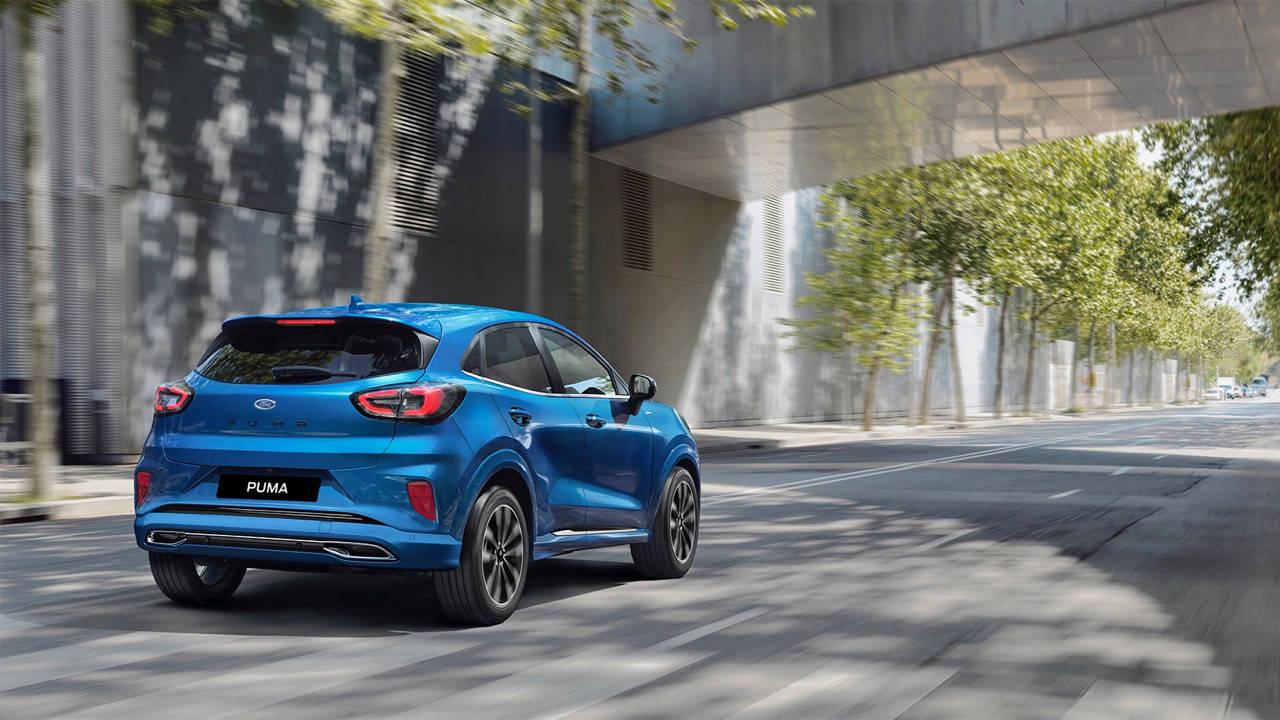 Fetching Ford Puma pricing and specification locked in for Aus

Ford Australia have detailed pricing and specification of the European developed Puma small SUV which is due to arrive in the second half of 2020.

The Puma boasts a distinctive appearance, though it has become the norm for small SUVs with the Mazda CX-30, Hyundai Kona and Toyota C-HR all offering plenty of funk.

It’s Ford’s famously competent dynamics and quality feel – which we appreciated in the latest generation Focus – that will have to set the Puma apart from its peers.

But that doesn’t mean it’s not a good looking vehicle with deliberately penned lines. While in photos it’s a great looking SUV from most angles we will reserve judgement on that front end until we see the Puma in the flesh.

Initially, there will be a single one-litre turbocharged three-cylinder engine with outputs of 92kW and 170Nm under the bonnet of all Aussie Pumas. Interestingly, we do without the more powerful 115kW/240Nm motor available in Europe which is a bit of a shame.

Power will be transferred to the front wheels via a seven-speed torque converter automatic gearbox.

As you expect from Ford, the interior is a fairly no-nonsense affair, the standard 8-inch touchscreen –12.3-inch for the ST-Line models – sits atop a sensibly laid out centre stack.

An additional – and oddly named – parking pack is available for $1,500 on all Puma models which sees the inclusion of front parking sensing, active park assist with side sensors and adaptive cruise with stop and go.

Interestingly, Ford’s ‘parking pack’ adds an identical $1,500 to Mazda’s vision package – with essentially the same tech – that is now standard across most Mazda vehicles.

Moving up to the sportier and $32,340 (driveaway pricing TBA) Puma ST-Line nets a set of five-spoke 17-inch alloy wheels, with a sportier body kit and bumpers adorning the exterior and a firmer suspension tune to bolster the athletic intentions.

Inside the ST-Line’s touchscreen swells to 12.3-inches, the seats get red stitching, while the flat-bottom steering wheel gets paddles shifters and ‘race-red’ stitching.

Additional customisation can be had on all Pumas, with a contrast black roof ($500), premium paint ($650) and $2,000 panoramic all optional.

Ford has priced the Puma more sharply than we anticipated for the Australian market, though it’s a shame that the parking package isn’t included as standard. 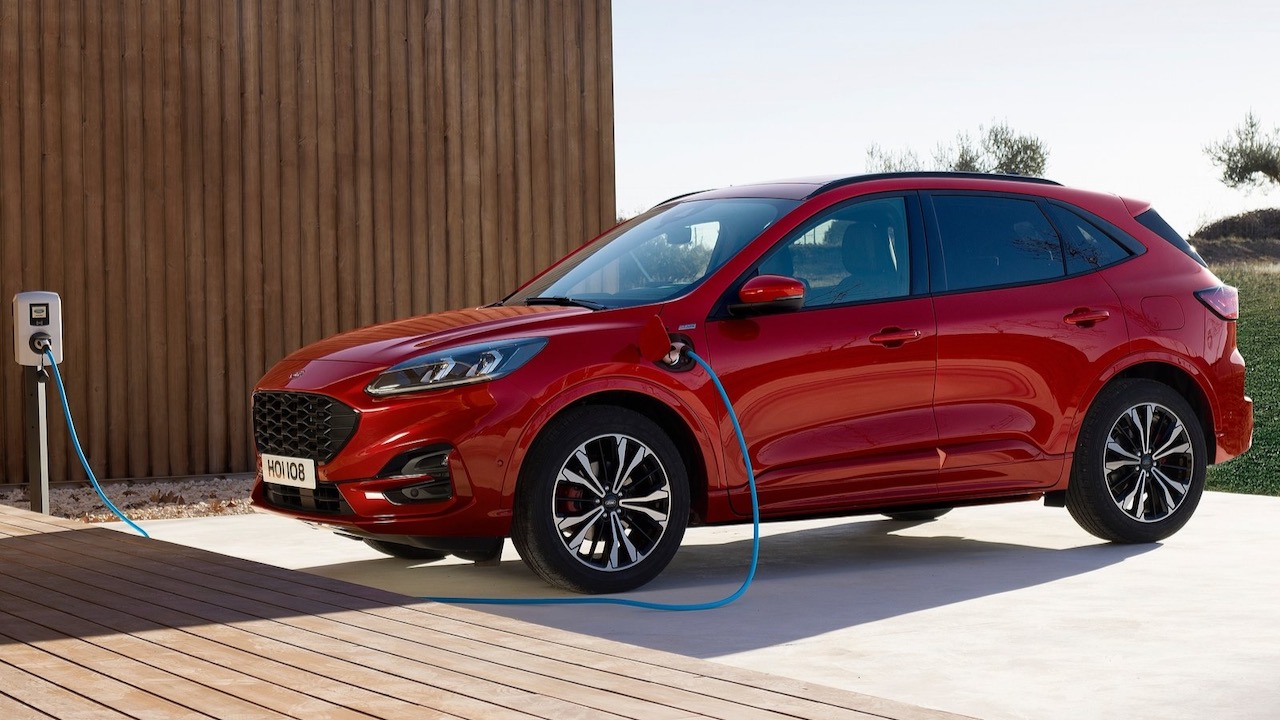 The fourth-generation Ford Escape will arrive in Australia in the third quarter of 2020 in a three model range kicking off from $35,990. A plug-in hybrid variant with 50km of electric range will be offered from launch in a first for the transatlantic brand in Australia – though the lion’s share of variants of the curvier new Escape are fitted with a familiar two-litre turbo petrol engine.

The new Escape, which competes with segment favourites like the Mazda CX-5 (reviewed here) and Volkswagen Tiguan (reviewed here), will seek to build on the relatively modest sales success of the outgoing third-gen Escape as it arrives alongside the funky new Ford Puma small SUV.

Underpinned by Ford’s new C2 platform, which also serves as the basis for the sporty Focus hatchback, the new Escape grows in width (by 44mm) and length (89mm), while the wheelbase is stretched by 20mm: Ford says room is increased for all passengers.

Three variants – a base Escape, mid-tier ST-Line and new premium-spec Vignale – will reach our shores. The new plug-in hybrid iteration – which is also a segment first for mass market medium SUVs in Australia – is the priciest Escape but is actually based upon the middle ST-Line specification.

Priced at $52,940, the Escape ST-Line PHEV will offer an all-electric range of ‘over 50 kilometres’, according to its maker, while using the electric supply from the 14.4kWh lithium-ion battery and electric motor. Assisting the electrified element is a 2.5-litre naturally aspirated four-cylinder petrol. Total system output for the hybrid is 167kW.

The decision to introduce a proper plug-in hybrid variant for the Escape is a divergence from the strategy at rival Toyota, who are offering their new RAV4 SUV with a conventional series-parallel hybrid that works in concert with the petrol engine.

The other five Escape variants are powered by a familiar 183kW/387Nm 2.0-litre turbocharged ‘Ecoboost’ petrol engine, which is front-wheel-drive by default, though it is offered as an AWD pairing in the ST-Line and Vignale grades. Fuel consumption is 8.6L/100km in both FWD and all-paw configurations.

The eponymously-badged base grade is available in a single $35,990 front-wheel-drive grade. As standard, the entry car is fitted with 18-inch wheels, LED headlights and taillights, twin exhausts, and a rear spoiler. On the safety front, there’s a decent suite of features offered up as standard: car- and pedestrian-detecting AEB, lane keeping assist, blind spot monitoring, traffic sign recognition, fatigue detection, and tyre pressure monitoring. A further $1,000 buys matrix headlights and a head-up display.

From there, it’s a $2,000 jump to the more athletically-styled ST-Line grade ($37,990), which is fitted with different 18-inch wheels, a dark grille, sportier bumpers, a lowered sports suspension, black roof rails, and a dark headliner. Inside, ST-Line buyers gain a flat-bottom steering wheel with red stitching, metal pedals, and a 12.3-inch digital driver display.

The ST-Line is the first new Escape grade to allow the fitment of AWD (for an extra $3,000). Additionally, you’ll need to option up the ST-Line pack ($2,800) to gain the base Escape’s tech pack, plus an electric tailgate, and heated front seats.

The front-wheel-drive plug-in hybrid is a $14,950 impost, but it builds on normal ST-Line specification by adding partial leather upholstery, a 10-way power driver’s seat, and a ten-speaker stereo.

Sitting atop the range is the Escape Vignale, which introduces Australia to Ford Europe’s premier-tier variant badge for the first time. The $46,590 Vignale represents an $8,600 upgrade over the equivalent ST-Line – and for the extra spend, Ford piles on additional luxuries like full leather trim, passive entry, powered and heated front seats, heated rear outboard seats, a panoramic sunroof, heads-up display, power tailgate, and automated parking. AWD is a $3,000 upgrade.

The Escape will arrive in dealerships in the Australian spring of 2020. 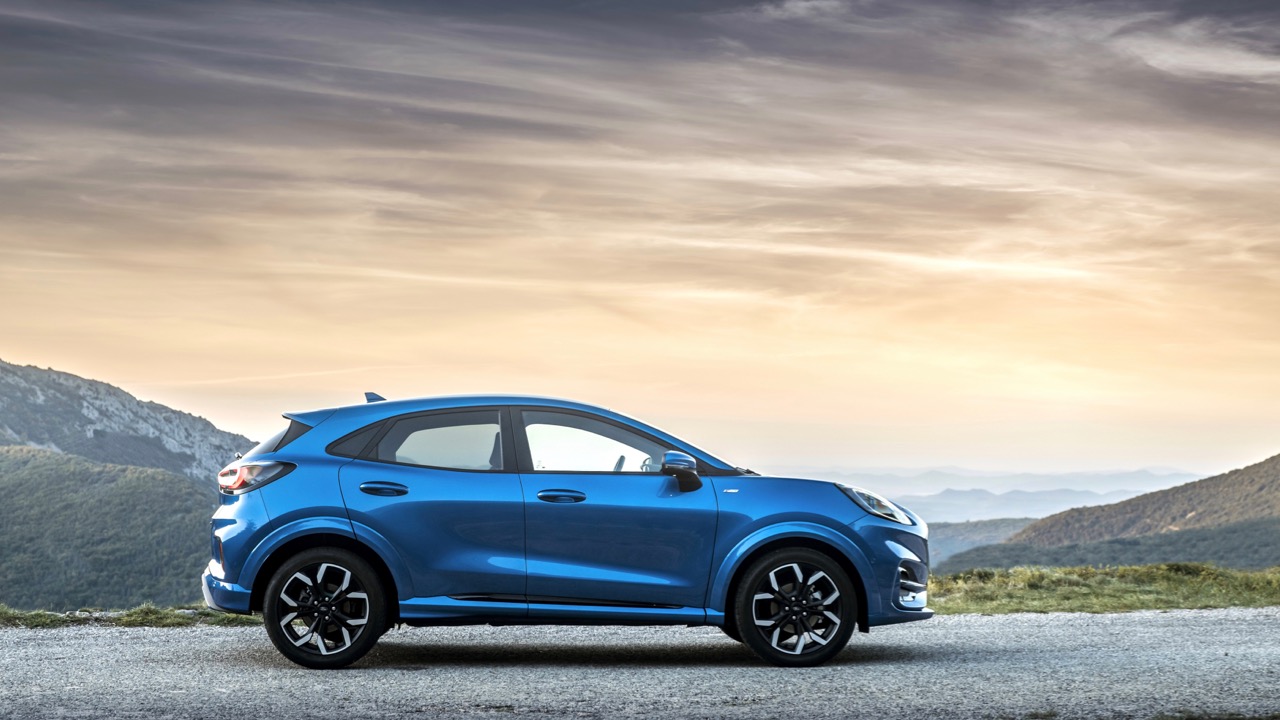 The word Puma might mean a few things to you – trainers for one – but it’s also a Ford nameplate, one that first adorned an elegant compact coupe in 1997 and is now perched on the boot-lid of a compact crossover.

On sale in Europe now, Ford has confirmed the athletic Puma for Australia in the second half 2020, where it will almost certainly be a hit. Though it won’t be without challenge, nestling into an ever-swelling class that includes the Volkswagen T-Roc, excellent Mazda CX-30 and Hyundai Kona.

Here’s a quick recap on the original Puma, it was a small coupe that emerged in 1997 when a two-door sports car was the must-have vehicle. Sadly that market dwindled in the early 00s, the stylish coupe was axed by 2001.

However, the Puma will be remembered fondly by enthusiasts, so it’s understandable there was some backlash from Ford fans when the new car emerged as a soft-roader to replace the rather uncool EcoSport.

But look back to the original Puma, a car to fill a sports-compact-sized niche. The new Puma simply swaps to compact-SUV.

Visual impressions are positive with that highly distinctive front end with Fiesta DNA in the grille and fog-lights, but those buggy headlights are almost throw back to the coupe from 1997. Although it may not strictly be a beautiful design, there’s no doubting the Puma has an identity of its own.

The interior is more subdued with a centrally-mounted touch screen adorning a simple dash, it looks as though the number of materials has been kept to a minimum, too.

There is currently a single one-litre three-cylinder EcoBoost engine available with two states of tune, the base being 93kW/210Nm which Australia will likely do without and the punchier 115kW/240Nm tune we’re more likely to receive. Details will be confirmed closer to launch.

A 48-volt mild-hybrid system will be employed to cut the Puma’s fuel consumption.

Naturally, a six-speed manual is offered in Europe, whether that will make it here remains to be seen but it’s likely that the seven-speed dual-clutch alternative will be the buyer’s choice.

Pricing is yet to be confirmed for Australia, but in the UK the base Titanium starts at £20,845 ($40,150 at the current rate), with range-topping ST-Line X from £22,895 ($44,100 at the current rate). Not an inexpensive crossover, but we await for full pricing and specification details closer to launch.

We do not doubt that the Puma is a more stylish vehicle than the EcoSport it replaces, and with the Australian buyer’s penchant for compact SUVs, we reckon the Puma might just be a hit. Of course, that all hinges on how it drives which we’ll find out later this year. 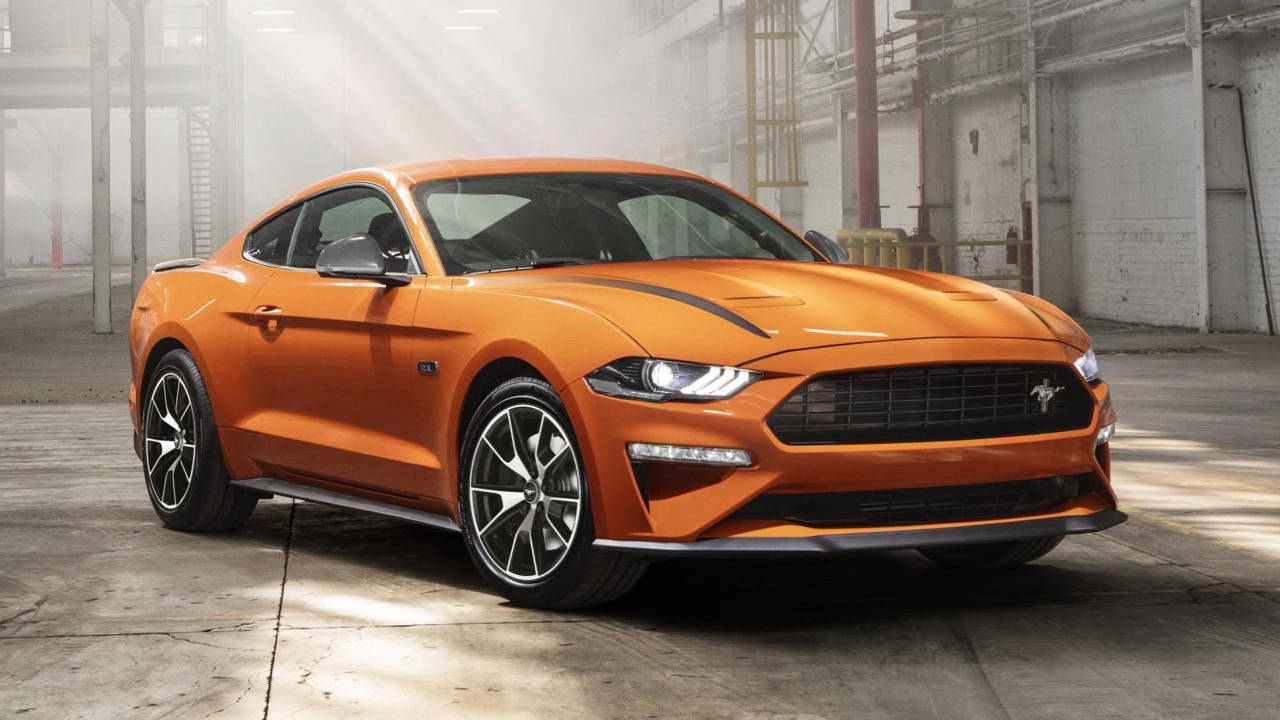 Ford has announced some key details of the 2020 Mustang High Performance 2.3L which is slated to offer a sportier drive than the current Ecoboost but retain its fuel-sipping abilities.

The 2020 Ford Mustang High Performance, as the turbo four will now be known, receives a revised 2.3-litre turbocharged four cylinder that produces 236kW/448Nm, a 12kW and 7Nm increase over the current Ecoboost model thanks to a larger 63mm turbocharger. Ford is claiming a flatter power and torque curve, with 90 percent of the maximum torque being produced between 2,500-5,300rpm, and power holding stronger to the 6,500rpm redline.

The high performance engine puts power down better due to a shorter final drive and revised gear ratios that should make the High Performance easier to keep on the boil. The High Performance Mustang can (thankfully) still be optioned with a six speed manual in the fastback body, though the convertible is only available with the 10-speed torque-converter auto.

To suit the new High Performance nomenclature, the 2020 model has received suspension revisions which include thicker front and rear anti roll bars, and a new suspension tune with optional magnetic dampers. To complement the suspension tweaks Ford have specified the Mustang with sticky Pirelli P Zero Corsa tyres which should give an additional handling edge.

The High Performance isn’t all about going fast, though. Ford have increased the capacity for customisation, with new ‘heritage’ colours and more generous standard equipment. With “bold colour choices” available, the ‘Twister Orange’ hero colour pictured is certainly striking. Borrowing the Mustang GT’s grille and splitter along with unique bonnet vents makes this four cylinder more aggressive looking than ever.

The High Performance has several updates inside, with a 12.4-inch digital dashboard, and 8.0-inch in-dash colour display with Apple Carplay and Android Auto as standard. An analogue boost pressure gauge is present, and the standard leather sports seats can be optioned to Recaros for additional lateral support.

The 2020 High Performance comes standard with AEB, lane keep assist, lane departure warning and active cruise control as standard. Ford is offering a capped-price servicing program for the new High Performance Mustang, at a maximum price of $299 per logbook service for the first four years or 60,000km.

Pricing is yet to be confirmed, but we can expect the High Performance to start somewhere above the outgoing Ecoboost models, in the vicinity of $51,000 for the fastback, and $61,000 for the convertible. The High Performance will be landing in Australia in February 2020 and should offer a compelling combination of handling capability and everyday use.