Hyundai has revealed an all-new vehicle to the world, which shows the brand’s future electric direction.

Teased a little over a month ago, Hyundai has now lifted the wraps off the 2022 Ioniq 5, a medium-sized electric SUV with a capacious interior.

The new car debuts Hyundai’s new modular EV architecture, dubbed E-GMP. The new platform is slated to appear under a large sedan and full-size SUV, though we expect it to form a basis for many more cars into the future.

Hyundai Australia has confirmed that the Ioniq 5 will be landing in the third quarter of 2021.

Where will the Ioniq 5 fit into the Australian market?

While you may know the Hyundai Ioniq as a medium-sized sedan available as a BEV, plug-in or series-parallel hybrid, well that name is now Hyundai’s EV arm with significant future plans.

Measuring at 4,635mm long, the new Ioniq 5 sits between the Tucson and Santa Fe in length, however it boasts a 100mm longer wheelbase than the eight-seat Palisade at 3,000mm.

That comes down to the freer packaging that EV-specific platforms allow. Hyundai was able to push the wheels right to the corners in the Ioniq 5, meaning there should be plenty of space for occupants.

Cargo space is impressive, too, combining a 531L boot with a front storage compartment up to 57L in size.

What will power the new Ioniq 5?

Buyers will have the choice of two battery pack sizes, the larger of which has a 72.6kWh capacity. A single rear motor produces 160kW of power and 350Nm of torque, though more expensive all-wheel-drive variants add a second motor to the front axle for outputs of 225kW/605Nm.

Range with the large battery and single motor is expected to be between 460-470km. Some way off the Tesla Model 3, but roughly equal to the Kona Electric with a 64kWh battery.

The Ioniq boasts a maximum DC charge speed of 350kW – that’s faster than Tesla’s current V3 ‘Super Charger’ and will see the 5 juiced from 10-80 per cent in just 18 minutes. A five minute stop at a public charging station should recuperate around 100km of range, too.

On top of the faster charging, Hyundai will offer a solar panel roof as an option to trickle charge the Ioniq 5 on the move.

With no steering column or transmission tunnel to deal with Hyundai was able to open the footwell entirely, with cleverly hidden charging points for devices.

There is a sliding console Hyundai calls a ‘universal island‘ which can be accessed by front and rear passengers. This sees the gear selector moved to a column behind the steering wheel – very Mercedes-Benz indeed.

Hyundai intends the Ioniq brand to be holistic in its efforts for sustainability. Like the Mazda MX-30, many of the cabin materials of the Ioniq 5 are sustainably sourced with plastics made from recycled bottles, plant-based bio fabrics and eco-friendly leather dyes.

There is a pair of 12.3-inch screens on the dashboard, one controls the infotainment, and the other is a customisable digital driver’s display. Traditional climate control buttons remain below.

Hyundai has developed new profiles designed to soothe or energise the driver through graphics interfaces and ambient lighting settings.

Naturally, connected technology will be on board, including car-to-destination navigation and the ability to check the Ioniq’s charge on your smartphone. A new augmented reality function can display navigation directions and lane suggestions on the windscreen.

The design of the Ioniq 5

Hyundai has designed the Ioniq 5 to look almost nothing like their current combustion-powered vehicles; it has hints of Honda e due to the short overhangs, but Hyundai says they were inspired by their first car, the 1974 Pony.

This is a wholly more angular vehicle with sharp creases and a recurring ‘V’ motif in the grille and on the flanks. The bonnet is a clamshell to aid aerodynamic efficiency, while the ‘auto flush‘ door handles extend out as the driver approaches.

Parametric design principles seen in Genesis products can be spotted in the wheels and lights of the new Ioniq 5.

SangYup Lee, head of Hyundai’s global design centre, said of the Ioniq 5: “the mission from the first day we began this project (was) to look ahead towards the horizon, but stay fundamentally Hyundai“.

All of the contemporary must-have safety features are present, including AEB with vulnerable road user, junction and reverse functionality, adaptive cruise, 360-degree monitor and a safe-exit assist for rear occupants.

Hyundai has developed a new parking spot retrieval system where owners can use their connected phone to creep the Ioniq 5 out of tight spaces to ease ingress.

The new Ioniq 5 is the first step in Hyundai’s BEV future and will be followed by a Sedan dubbed the Ioniq 6 and an even larger SUV to be called the 7.

Hyundai has confirmed the Ioniq 5 will land in the third quarter of 2021, with pricing and specification to be detailed closer to the Australian launch. 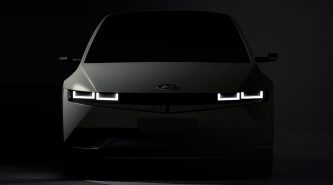